The Emperor has no Armchairs: Cesare Tacchi at Palazzo delle Esposizioni

The year is 1968. At an art festival in Rome, the young, ruggedly handsome Cesare Tacchi sits on a chair behind a door-sized rectangle of plastic, watching furtively as the visitors enter the gallery. Every few minutes, he covers a section of the plastic with yellowish, opaque paint. Then he sits on the chair and waits, measuring the audience’s reaction. He repeats this, painting and sitting, waiting and observing, until the whole door-sized sheet is covered, and the audience can no longer see him through it. He called the event: Artist’s Cancellation.

This is the first time the infamous door has been displayed, a physical reminder of what the curator calls Tacchi’s ‘renowned and extreme gesture’. The artist sat behind a door and slowly painted himself away, in a brick-heavy metaphor for the death of the artist. (In a subsequent show, Tacchi kissed the floor of the gallery, in a gesture I can only guess was meant to demonstrate his remorse.)

Pop art usually promises funky kitsch, bold colors, a sense of play. When it works, it forces us to see familiar images in another slant. It should stop us in our unthinking, consumer-driven tracks. The retrospective of Cesare Tacchi’s life’s work, currently on exhibit at the Palazzo delle Esposizioni, fails to deliver on this promise. 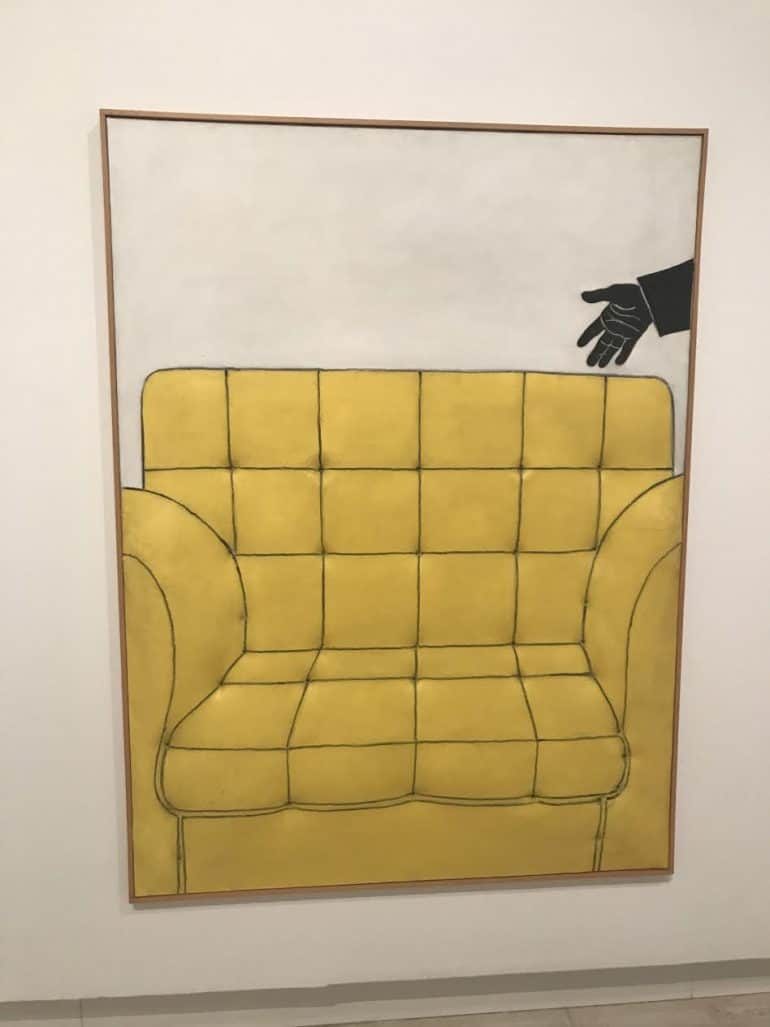 A bit of foreshadowing, in the silk-screened curator’s notes on the walls: Tacchi is described on the wall as ‘solitary’, the kind of person who zeroes himself out at his own art show. His aim, ‘to make silence’. Not visionary, prescient, or ingenious; the single word we are offered tells us that he did not connect easily.

In the early 1960s, Tacchi shared his brother’s obsession with cars. His paintings feature simple shapes, simple colors, simple compositions. Like a few inches of Edward Hopper blown up to fill the canvas. His paintings reduce the cars to their barest elements, zeroing out the possibility of texture, modulations of color, or a sense of mystery. Elsewhere in the gallery, on at least two paintings that feature words, he arranges the word dead center in the canvas, and decorates around it, flaunting the most basic rule of composition.

This was followed by a decade where he explored the ‘useless’ armchair, in keeping with Pop art’s intention to grab hold of bougie objects and shake them until they pour out a new meaning. He painted chairs, he sculpted chairs, he flattened chairs. Behold: a yellow chair with a black hand reaching into the frame from above. A white chair, stuffed and pressed against a wall, with flowery footprints on the floor. 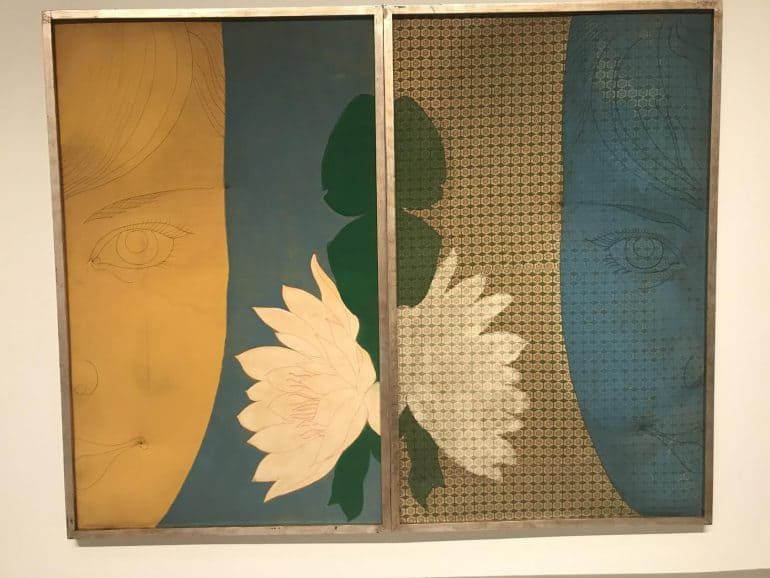 Tacchi seems to embody the problem that Thomas Wolfe described in his 1975 critique of the art world, The Painted Word. His art suggests an idea, but as an aesthetic experience in its own right, fails to deliver. We see this in a set of wooden boxes filled with stacks of small mirrors, a card catalog of Greek gods. The names of the gods are written on the mirrors in a way that doesn’t feel studiedly effortless, but genuinely careless. As if, after cutting all of those mirrors precisely, Tacchi ran out of time and scribbled some names.

What kept me going throughout this exhibit was the curator’s use of overblown, anachronistic words, a choice of high-minded descriptors which, instead of helping us to understand what Tacchi was doing, confuse us further. Words like syntagm, evert, auroral, castigated, aphasic.

Out of all these lexical gems, aphasic is the that comes closest to encapsulating Tacchi’s oeuvre. To be apashic, as one might be after a stroke, is to be speechless, mute. As what Tacchi achieved was mostly to disconnect from those around him, by reducing shade to flatness, beauty to concept, an object to its symbolic value.

Or, as the brochure puts it: “…his artistic language’s potential for communication is sorely tested with encroachments into a totally aphasic dimension.” Not just a little aphasic, we are reminded, but totally.

Mama Shelter Rooftop: Your home away from home in Rome

Unique al Palatino Garden Restaurant: an oasis in the heart of Rome