The architecture of the Palazzo delle Esposizioni is redesigned by Julian Rosefeldt’s Manifesto installation covering 13 large screens with different stories which come together, every now and then, in the powerful rendering of a choral voice.

The work, which was shown for the first time in 2015, pays homage to the moving tradition and literary beauty of 20th century artist manifestos, ultimately questioning the role of the artist in society today.

For each of the 13 screens, Rosefeldt has created a collage of texts, drawing on the manifestos of Futurists, Dadaists, Fluxus artists, Suprematists, Situationists, Dogma 95 and other artist groups or movements, and on the musings of individual artists, dancers and filmmakers such as Umberto Boccioni, Antonio Sant’Elia, Lucio Fontana, Claes Oldenburg, Yvonne Rainer, Kazimir Malevich, A André Breton, Sturtevant, Sol LeWitt, Jim Jarmusch, Guy Debord, Adrian Piper and John Cage.

Each season presents a different situation focusing, apart from the prologue, on eleven different female figures and on one male figure: a homeless man, a worker in a waste incineration plant, a CEO, a punk, a scientist, the speaker at a funeral, a puppeteer, the mother of a conservative family, a choreographer, a newsreader and a teacher. All the characters are played by Australian actress Cate Blanchett, who imbues new dramatic life into the words of the manifestos in unexpected contexts.
All in all, the work is a sort of “manifesto of manifestos” which the artist himself defines as a kind of contemporary call to action where political meaning is held up to the light of a performative component.
The product, in many cases, of youthful anger and vitality, the manifestos of the 20th century do not simply enshrine their authors’ determination to change the world through art, they interpret the voice of a whole generation. 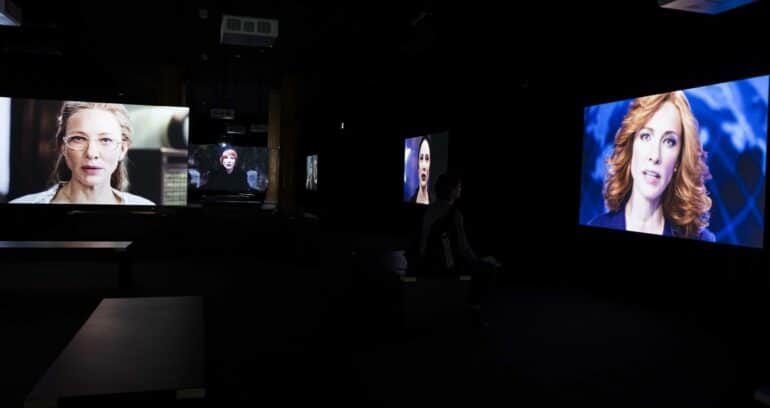 Exploring the power and urgency of these statements – expressed with passion and conviction by artists of different periods – Manifesto asks whether the words and feelings that they enshrine have withstood the test of time. Do they still have a universal meaning? And how has the dynamic interplay between politics, art and life changed?

The exhibition at the Palazzo delle Esposizioni is accompanied by a catalogue in English with entries by Burcu Dogramanci, Anna-Catharina with Udo Kittelmann and Reinhard Spieler, an interview with the artist conducted by Sarah Tutton and Justin Paton and a transcription of the manifesto collages.
At the Palazzo delle Esposizioni, visitors purchasing a ticket to the exhibition will also be given a booklet with the Italian translation of the manifesto collages.