Sangue e Arena at the Colosseum

Red and pink graphics on billboards and buses around Rome invite the public to Sangue E Arena – a thirty-minute, after-dark multi-media show that encapsulates Emperor Titus’ 100-day pageant, with naval battles, bloody corpses, imported mammals from Africa, and sea nymphs. In 80 AD, Titus provided entertainment on a grand scale for the citizens of Rome, and here is our chance relive the Spectaculis. The show gives visitors the chance to interact with Colosseum not as a museum but as a theater, its original purpose. Anyone willing to pay 20 euros for a half-hour show becomes an audience member, seated on rising tiers like our Roman ancestors.

The opening sets a tone of bloodshed. Red lights and the roar of lions fill the night air. A heavy door cranks open somewhere underneath the Colosseum floor. Parents of young children will wonder at this point if they should have come, but not to worry, this is a project of fits and starts, and the sense of terror is not sustained. 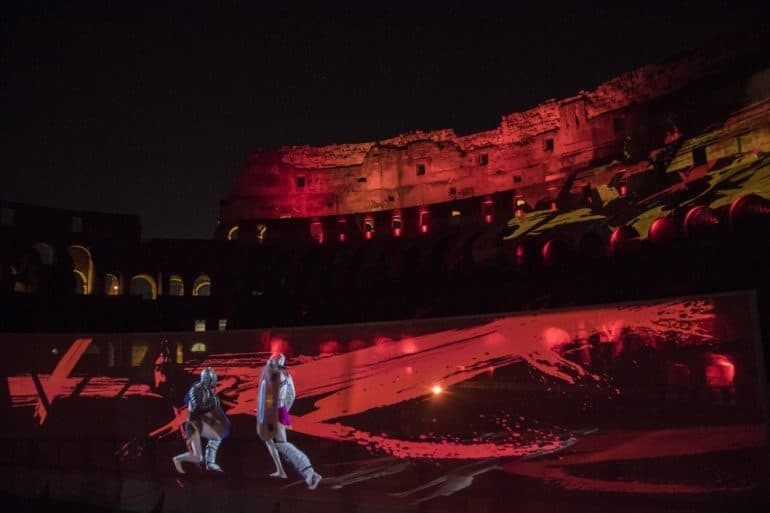 The sequence of events is explained by the ancient poet Marcus Valerius Martialis, known in English as Martial, who witnessed the 100-day pageant in 80 AD and recorded his somewhat satirical observations in Liber de Spectaculis. “Rome is now restored to itself, and under your government, Titus, what were formerly the pleasures of the tyrant are now those of the people.”

On a moveable screen and the walls of the Colosseum we are shown the procession of dignitaries that opened an event, gladiator battling each other and animals, a woman in a flowing white dress dancing underwater who represents the mythical nereid, a sea nymph; a tiger fighting a lion; and ritualized executions that re-enact myths of Orpheus, Leander and Prometheus. Arches are lit up in gold and blue. Mosaics and frescoes are cast on the highest walls. 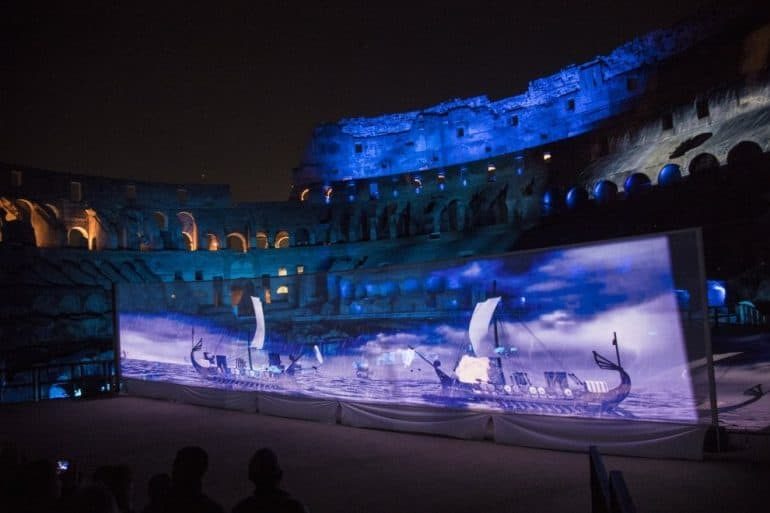 Despite Martial’s endearing quotes, and the alternation of English and Italian passages, the meaning of these events is clearer in the accompanying booklet than in the film; it is a challenge to follow the storyline without reading it first.

A series of maps in the beginning feels too formal and out of place after the roaring lions.The same three gladiators parade from right to left on a continuous loop. Ancient mosaics are re-imagined as dancing, animated characters. The ending is so abrupt as to shock the audience into a chorus of ‘Que?’ when the credits rolled.

Blood in the Arena? Blood on the Arena? The title gets lost in translation and reflects the half-realized quality of the show itself. Is it for children, with its animated characters, or adults, with its unexplained historical references? Sangue e Arena has the mark of a creative project that was pulled in too many different directions, without a unifying vision. Most of all, the project could have used one more run through on the post-production floor.

Entrance at Stern Gate (around the back of the Colosseum)