The eponymous exhibit is curated by Gianni Mercurio and displays several large scale works by Basquiat as well as sketches, collages and ceramic works. Basquiat’s pieces capture a very important social time in The United States during the 1980s, showcasing the subculture of graffiti and street art during the height of New York’s global art scene. The exhibition consists of around one hundred works which include several mediums as well as Basquiat’s collaborations with Andy Warhol. 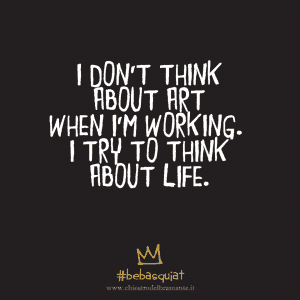 Overall, his body of work speaks of the tough life of a young artist in early 80’s America. In the exhibition, we see Basquiat’s artistic evolution, from the tagged the walls of New York bearing his pseudonym SAMO, to his later, more successful projects. Basquiat’s style, meanwhile, combines the elements of both figurative and abstract means. He incorporates tribal, expressionist and abstract approaches to figures and creates his own, unique harmony. Another signature is his use of writings: integrating his street art beginnings with his studio works gave him an individual platform to share his genius compositions. Most significantly, each piece gives a different insight into Basquiat’s experiences, particularly that of a child growing up during the Civil Rights movement, his activism for African-American equality often demonstrated in his art