Does my ass look big in this country? Every expat in Italy inevitably wakes up one day with this quietly alarming question. The honeymoon period when you first move to Rome is grand. You slurp gelato with gay self-assured abandon and shovel in margherita pizza the size of your head, masticating like a cultural martyr, solemnly accepting that it is your expat duty to understand the depths of Italy and experience the cuisine. You outdo yourself euphemistically with your justification of carbs and sugar as a pretext for expatriate assimilation. But here’s the truth my fellow focaccia-fiends: Italy doesn’t make people fat; people make people fat. This country’s vast choice of dishes and fresh produce is, unfortunately, conducive to good health. Mi dispiace. This is a city where the locals get around on bicycles, the centro storico is actually easier to navigate on foot and the climate permits pleasant outdoor activity pretty much 10 months of the year. Those emails you’re writing back home about it being impossible to eat healthy here are the lies of an indolent expat. Look yourself in the specchio and admit la verita’: you have healthy options here and they involve some of the most mouthwatering produce in the world. The mentality that Italian cuisine waddles within the confines of stodgy pasta and cheese-smothered pizza is one of a myopic tourist, the very same who believes locals actually dine at the restaurants in Piazza Navona. 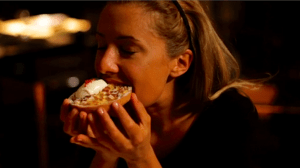 I’ve been through falling in love in this country with the ensuing fears of being naked in front of a new lover. I’ve filmed two TV shows here, for which the objective was to present a girl who loves her food yet magically avoids bringing to mind that charming Italian word ‘ciccione’, an affectionate way to say ‘chubby’. There have been times in my Italian life when I’ve been so spectacularly poor that doing as the romcom Eat, Pray, Love advises – eating pizza wantonly then simply buying a bigger pair of jeans – was not an option. I’ve had that moment on an Italian beach when you realise that a Brazilian-cut bikini is standard attire irrespective of age group here. I’ve then stood in Calzedonia changerooms in shock at what the mirror claimed was my body’s reflection. And last month I had to prepare and get ‘in forma’ for a worldwide TV ad shot in Mauritius in a bikini during the coldest, rainiest, coziest month of the year, when cioccolato caldo and risotto were ready to hug my soul in every bar and trattoria in Rome.

So here’s my list of alternatives for those who want a life that is dolce, yet with healthy skin, lots of energy, no carb coma and a body that fits into the jeans you brought over here with you on the plane.

Instead Of: Tonnarelli alla carbonara

Perche’: Pick up some fresh vegetables from the market, get all the salty joy from polpette but also get some protein in there with turkey meat balls and less carbs by perhaps adding only a handful of pasta.

Where: This recipe is best cooked at home as you can add whatever you have on hand. For a shortcut, the butcher in the supermarket on Via del Governo Vecchio makes the most delicious chicken or turkey polpette that are very filling so you only need to buy a couple per head and they can be halved and made into smaller balls.

Instead Of: Insalata Caprese

Perche’: They might call it a salad but mozzarella cheese isn’t exactly the most nutritious thing you can choose as a starter. You’re better off going for delicious raw tuna drizzled in extra virgin olive oil with a squeeze of an Amalfi lemon perhaps on a bed of peppery rucola.

Where: The freshest seafood in Rome is at Assunta Madre on Via Giulia or Pierluigi on Via Monserrato. But both of these restaurants are quite upmarket, so if you’re looking for a cheaper option try the octopus salad at Il Corallo on Via del Corallo or the carpaccio di pesce (raw fish) at Giulio Passami L’Olio on Via di Monte Giordano.

Instead Of: Cornetto and cappuccino

Perche’: We’re in a country with arguably the best baristas in the world. You don’t need to mask the flavour of the bad coffee with milk and sugar so order a rich dark espresso, which is less fattening and makes you look like less of a tourist ordering a ‘caffe’ normale’. You can get delicious sugar-free artiginal yoghurt made from buffalo milk here and spoon it over fresh fruit grown locally in the Castelli Romani. A ‘centrifuga’ is a fruit or vegetable juice and almost all bars will do freshly squeezed orange, many will do apple, carrot and orange and there are also some great spots that will juice fennel, cucumber and even exotic fruits like mango and lychee. Then there’s the bread – it’s not all white and fluffy or glazed with icing. Go for ‘pane di segale’, which is generally the darkest (and therefore most nutritious) bread you can find in Italy.

Where: The most scrumptious (and closest to rye) bread you’ll find in the city is made in the historic Antico Forno in Campo de Fiori. No supermarket in Rome stocks bread this dark and delicious so get the morning batch before it sells out. They also sell amazing gourmet honey for you to drizzle on your toast. Fruit is best from an outdoor market – I love Campo de Fiori for atmosphere and for a guy who sells mixed nuts at prices the supermarket will never compare with. However, the fruit market in Piazza delle Coppelle is run by a family from the Castelli Romani who will give you the best service and there’s a guy who has a stall selling fish two days a week. Or get the best quality and diversity of fruit in Rome at Ginger on Via Borgognona, which is a chic juice bar/restaurant serving up super fresh and healthy dishes to a mix of Rome’s businessmen, beautiful people and health conscious. You can get ridiculous exotic fruit platters or a simple bowl of fruit, yoghurt and muesli. Other spots for a fruit or vege juice include Barnum Cafe on Via del Pellegrino (they also do delicious salads in giant bowls with wholemeal bread or unforgettable chicken and guacamole panini). For a great selection of designer, music and fashion mags with your juice, head to Circus on Via della Vetrina, 15.

Perche’: Pizza is phenomenal here but Romans also do an excellent roast chicken and although it usually comes with potatoes, you can always ask to swap this for vegetables instead. I order a side of chicory, which is very Roman and is often done with chilli, olive oil and lemon juice to balance out the bitterness of the vegetable.

Where: Da Francesco in Piazza del Fico does a succulent little roast chicken and the waiters are incredibly friendly, in spite of how packed this place gets. If you really want your chicken healthy with no skin then head to Ostaria del Pavone in Vicolo del Pavone where they will do you a filling salad with carrot, fennel, lettuce, tomatoes and top it with grilled chicken pieces and shards of Parmigiano. 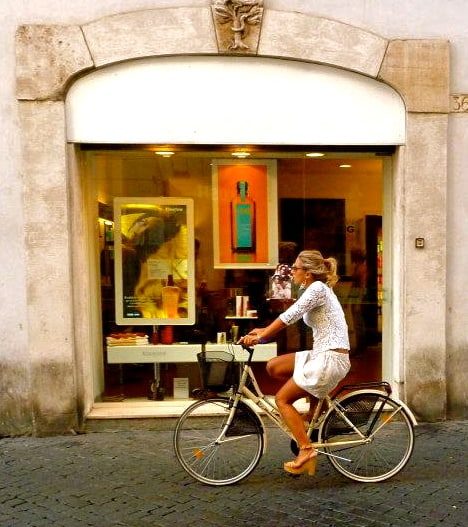