Picasso’s name does not immediately bring to mind the world of sculpture. So familiar are we with his painted masterpieces, his Cubist muses with fractured faces and his phases in Blue and Pink, that we do not always consider the vast contribution the artist made to modern art through his experimenting with practically every material available to him.

In fact, it was only upon viewing this exhibition, focused solely on the sculptures Picasso created over one of the most dynamic periods of modernist history, that I became aware of the quantity of multimedia work produced by the revolutionary 20th century artist – it is estimated that Picasso churned out a total of fifty thousand works, only a rough two thousand of which were paintings. He also specifically forbade his sculpture to be publicly displayed until the late sixties, accounting for its being lesser-known.

It is therefore a remarkable thing to be able to see so much of the artist’s oeuvre on display at the Galleria Borghese and trace crucial elements of Picasso’s life and evolving artistic style within his work. The exhibition flows chronologically, permitting the viewer an understanding of how Picasso’s sculpture evolved-the collection begins with bronze casts of female heads echoing his early cubist phase before merging onward into Surrealist themes and objets trouvés. 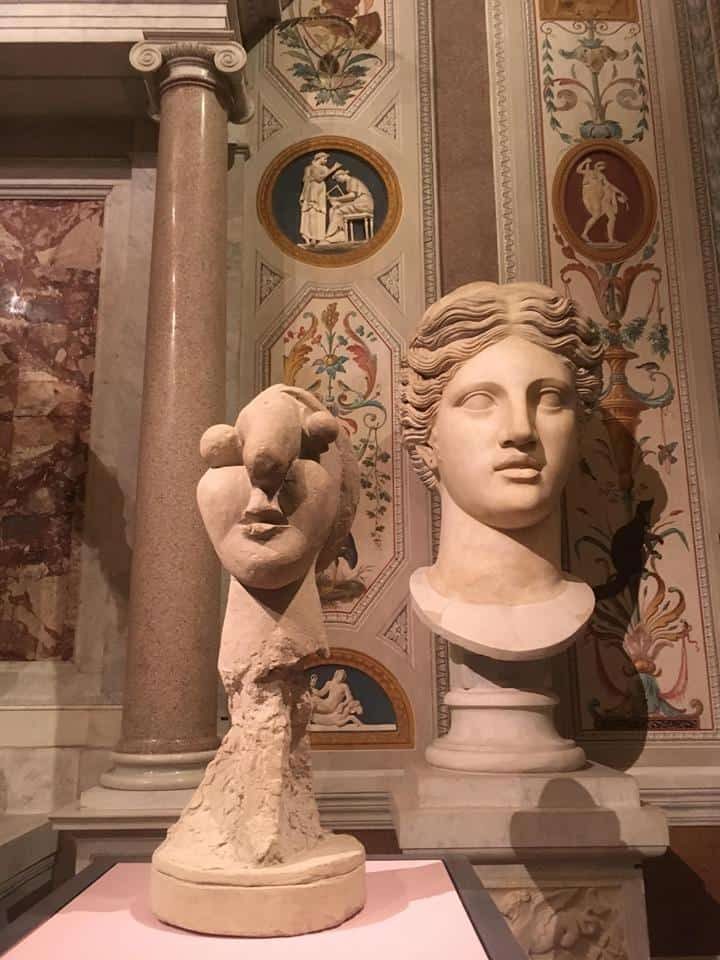 One can read the fifty-six works on display as a mapping of sixty years of the artist’s life, testaments to his leaping from place to place and from woman to woman. The materials used echo the environments Picasso spent his life in: wood foraged from trees near his home at Boisgeloup or glass vials he collected from a nearby perfume factory.

Even more interesting are the possibilities evoked by Picasso’s pilgrimage to the Galleria Borghese in 1917 with Cocteau and Stravinsky in tow, undoubtedly taking inspiration from the collection’s space and its function as a treasure-trove of classical and baroque sculpture. Considering Picasso’s deep interest in classical mythology and his identification with the figure of the Minotaur-the half-man, half-bull hybrid Cretan – the exhibition’s layout contemplates the link between its masterpieces of sculpture and their influence on a young Picasso’s work. In twelve rooms Picasso’s sculptures are strategically placed against the gallery’s impressive backdrop of Berninis and ancient Roman effigies, drawing thematic and symbolic parallels between the different worlds.

However, of all the parallels between Picasso’s work and Antiquity’s themes, the one that I thought most needed discussion revolved around women and metamorphosis.

In Greek mythology, humans were transformed into animals or hybrid creatures by deities, usually for an allegorical purpose. Their world was anthropomorphic, with virile fauns and minotaurs stalking the Earth. Muses and nymphs, however, were usually preyed upon and sometimes petrified forever, turned cold and symbolic like Niobe’s weeping stone. We can see this crystallization occurring in Bernini’s Apollo and Daphne, as the nymph must turn into a tree in order to escape her predator, her swirling white marble hair freezing into leaves.

Within Picasso’s work we find a continuation of this very literal objectification (because of course sculpture makes objects of all its subjects). Here, female forms are not only distorted but dehumanized as they undergo a process of transformation into banal objects. In the exhibition’s last room, a thinly molded amphora gently curves to mimic the female form like an elongated Minoan snake goddess. Picasso’s sculpture is skillfully cast, giving the illusion of supple skin, but remains disturbing. Woman here is perhaps worshipped, but still created as a menial household thing to be passed over and handled- a glorified jug. Stripped of her dignity, she is frozen in time as a sexualized, disposable thing. In these cruel immortalizations, Picasso’s muses are mere snapshots of a once blazing passion that then faded, leaving only a fossilized image behind. What is captured here most of all is the metamorphosis of the goddess into the doormat.