There is something wonderfully exhilarating about being lost in a foreign city, especially when that city happens to be Rome. On my first trip to Rome I’d always ensure I’d have my map to hand, a guidebook, and a checklist of places to tick off during my daily voyage. However, as with many newcomers to Rome I soon found out that my destination of choice was not so easy to find, despite what the map might be saying. The scattered alleyways and winding side streets that seem to go on forever can defy logic. I’d pinpoint a place on the map, think it would be so easy to locate only to end up wandering around the maze of streets, asking people for directions along the way; or if all else failed I’d frantically search for a Wifi spot to load Google maps on my phone. Sometimes I’d even try to backtrack and retrace my steps when lost, which only made things worse. Rome is a labyrinth and can puzzle the most accomplished of navigators, so one thing is for sure – you will get lost in Rome. So why not make the most of it? 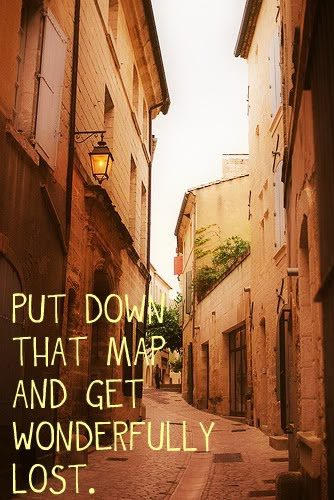 Apart from wasting a lot of time, I discovered that having a ‘planned’ itinerary wasn’t all that fun. So I decided to ditch the maps and roam the scenic streets and see what I might stumble across. Granted most of us try not to get lost, especially in a new place – and I was one of them. However if you give yourself enough time you’ll discover some grand hidden treasures that you wouldn’t have come across if you had not strayed off the beaten track so to speak. I’d suggest starting at a landmark, piazza or a metro station and then meander down a random street – as it’s likely that if you feel you have strayed a little too far into the Roman abyss that someone will direct you back to your starting point. I’ve used this technique in places such as Garbatella, Monti, Prati and Trastevere and getting lost has allowed me to meet locals, shop in authentic boutiques and find some fantastic dining establishments; you just never know what is around each corner in Rome. There is something fulfilling about the spontaneity of aimless strolling especially when you discover a hidden gem of a place that isn’t bustling with tourists.

I found a great family run restaurant whilst actually searching for a different eatery, came across a late night piano bar when I couldn’t find my hotel on the first day, and encountered a lovely Italian-American family when strolling around Trastevere. Being lost can actually sharpen your navigation skills as I noticed it made me more self aware of my surroundings, the people around me and how I managed the stress of being somewhere unfamiliar. You’ll find delving into the unknown is a fun place to be, so let the initial panic dissipate and go astray, as it’s a fantastic way to experience the unexpected delights of Rome. If you’re worried about walking the streets alone, then you can wander aimlessly in a group for that added safety net. It’s also fun to see how others in the group react when getting lost and witness how different people manage their panic levels. Immerse yourself in spontaneity and unpredictability, I guarantee you will find somewhere worthwhile on your unplanned journey. And if you do get a little ‘too lost’ in the beautifully layered city of Rome you can always find a busy road and holler TAXI!