Film fanatics and music lovers alike will be enthralled by Gladiator’s live orchestra screening at Circus Maximus this June. Director Ridley Scott’s historical drama will be played outdoors in high definition, bolstered by the talent and power of the Orchestra Italiana del Cinema’s 200 musicians and choir members.

Justin Freer, a graduate of UCLA in music composition who has conducted orchestras around the world, will be pulling the strings during these screenings of Gladiator. The concert will certainly be an exhilarating and challenging one for Freer, who will face the movie screen and sea of musicians, aligning every wave of his baton, bow stroke, and breath with the film.

The orchestra and choir will be joined by the hypnotic tones of Australian vocalist Lisa Gerrard, whose collaboration with Hans Zimmer won her a Golden Globe Award for Best Original Score. Along with Gerrard’s win, Gladiator secured 58 awards and over 100 nominations upon its 2000 release. 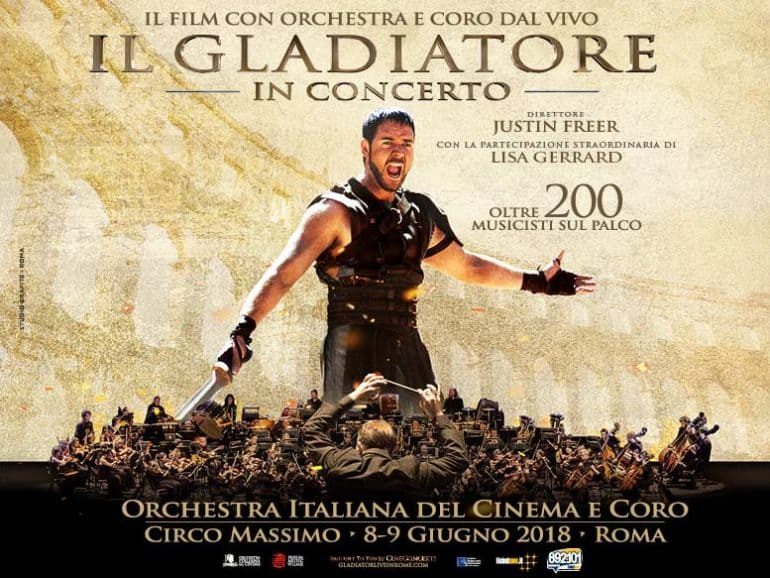 In the film, Roman general Maximus Decimus Meridius (Russell Crowe) becomes a slave and gladiator after Commodus (Joaquin Phoenix) kills his own father, Marcus Aurelius (Richard Harris), and usurps the throne. Maximus, a fictional character, is loosely based on historical figures such as Spartacus, Narcissus, and Claudius Pompeianus. Gladiator’s Commodus may be a little disappointing to classicists, since the real emperor believed himself to be the reincarnation of Hercules, participated in gladiatorial combats while naked, and took pleasure in clubbing wounded soldiers and amputees to death in the arena. In the film, Maximus avenges the murders of his wife and son by killing Commodus in the Colosseum.

A preview of the show will take place on June 6th in the Colosseum for a smaller audience, with proceeds going to charity. Tickets are on sale from 50 to 250 euros, depending on seat location.