Two of Rome’s street artists sit down to discuss their favorite topic, the street art scene.

How long have you been a “street artist? How did you start?

Mr.Klevra: It’s all Omino71’s fault. I didn’t even like these posters on the street, and now, after quite a few years, I find myself making bigger and more complex posters… So if you want to blame someone, blame him!

Omino71: Let’s be honest, without the Internet, street art would have remained a neighbourhood phenomenon, so my “birth” can only coincide with my opening of a Flickr account in 2006. If you go looking through my pictures you’ll find colorful sponge mosaics from back in 1999, but was it street art? And was I Omino71? Boh!

Have you ever had legal problems because of street art?

Mr.Klevra: Fortunately not, but this is also because I’m a fast runner. I remember once in Milan, last year, with Hogre… As I was taking a picture of the poster I’d just done, I found the police next to me with their lights flashing like a disco… Off we ran… Maybe as I get older I’ll slow down and they’ll catch me, but I’ll just blame it on Omino71.

What type of research goes into your art? What do you use as inspiration?

Mr.Klevra: I’m constantly unsatisfied and am always attempting to develop new techniques and ideas; I have a lot of inspirations, like Ivan Albright. I’ve always been a self-taught person, and my curiosity has always stimulated the search for new inspirations, from comic books to the most classic of art, from poetry to classics like the Odyssey. Oftentimes I realize that my art comes out of whatever is impacting my life in that moment.

Where does the eikonprOJeKt come from?

Mr.Klevra: It’s the fusion of three completely different minds, brought together by a passion for street art – creating art on the streets has no price. It’s myself, Omino71, and Jessica Stewart, who has captured each moment with her camera. For me, what brings us all together is the love and passion with which we do what makes us happy.

Who is the nicest/friendliest of the street artists in Rome?

Mr.Klevra: Not me, I have my sharp angles… The nicest and most cheerful is Hogre.

Omino71: Other than Mr. Klevra (who isn’t even that nice), definitely Zorro, who you all know as Hogre. 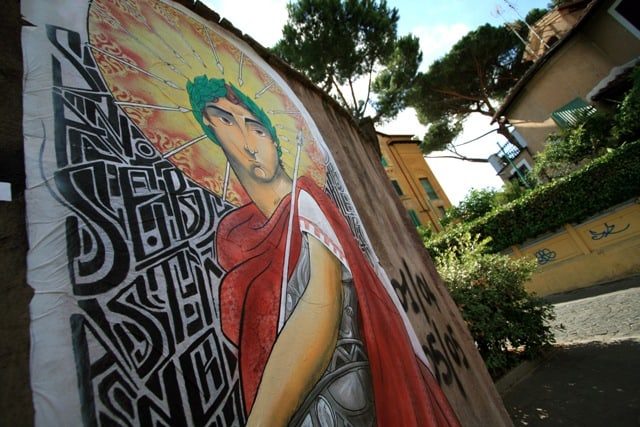