I am one of those 600,000 Italian nationals who live in the UK and more precisely, one of those 16,000 Italians who are studying in Britain. I moved from Varese to Cardiff in September, to pursue my dream of becoming a journalist and I have been living there ever since, doing my Masters in International Journalism. 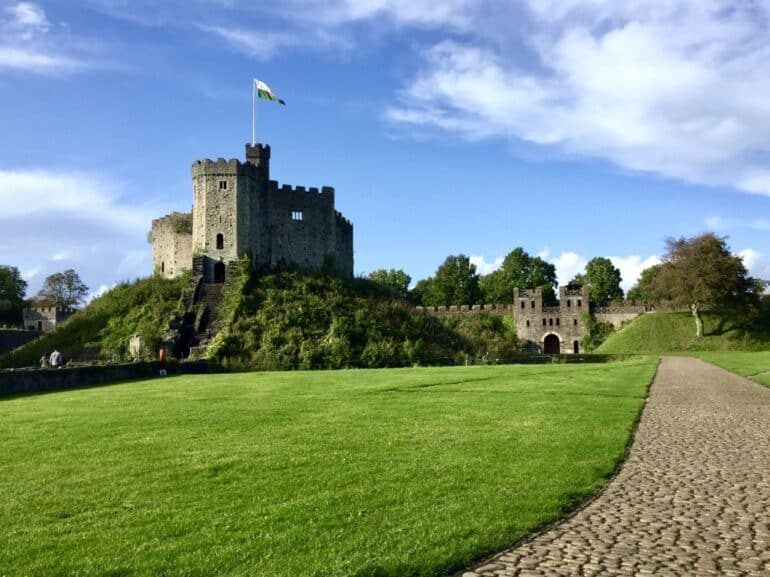 But on Monday, March 16th, everything changed. It was a usual Monday morning and I went to university, just like every other day. Actually, it wasn’t that normal. People were starting to become more and more concerned about the coronavirus outbreak that was devastating many European countries, especially Italy.

Having friends and family in Italy meant that I had a very clear idea of what was happening in the country, and just like many other European citizens in the UK, I thought that the British government was underestimating the problem and it seemed irresponsible for them to keep public places open.

Lorenzo Veronesi, an Italian national who lives in Cardiff, said: “The British government guiltily downplayed the virus outbreak. And I think that if they had taken some soft precautionary measures beforehand, they could have avoided many infections.”

But it wasn’t my decision to make, and there were very few cases confirmed in the country. So, I went to school and the announcement came: Cardiff University had decided to suspend all face-to-face lessons for 5 weeks, until April 20th. I was planning to go back home to Italy for Easter Break, but that flight had been cancelled, so I was preparing myself to stay in Cardiff until the end of the lockdown and quarantine in my tiny student accommodation room.

However, later in the day I discovered that the Italian airline company, Alitalia, was organizing some flights to repatriate Italian people living in the UK. So, I started to consider the idea of actually coming back home, and I was struggling to make a decision.

On the one hand, even if at that time the United Kingdom wasn’t in a lockdown, I didn’t want to travel, because in Italy everyone was discouraging any movement. Moreover, I was scared of actually catching the virus by travelling, and I did not want to pass it on to my family back home.

But on the other hand, I fortunately found an empty apartment I could self-isolate in for the 15 days following my return in Italy and I was scared to stay in a country that wasn’t my own, where I had never experienced the healthcare system. I was afraid of actually getting the virus and becoming a burden for the NHS. Even though I am a European citizen and I would have received free health care, I didn’t like the idea of potentially getting a disease and being away from home. On top of that, I didn’t know how long the lockdown would have lasted, and I was feeling anxious at the idea of being trapped in a foreign country, in a very small room (with just one tiny window) and without my housemate and most of my friends, as all of them had gone back home.

After spending the whole afternoon trying to find a way back home and trying to access the Alitalia website, which was clearly overwhelmed with requests, I finally managed to book a flight from London Heathrow to Rome Fiumicino for the next Sunday.

The flight was really expensive and many people think that this isn’t fair, as it should be our right to repatriate, and it shouldn’t be a privilege of those who can afford it. Alessandro who was studying in Cardiff through the Erasmus program says he’s grateful that Alitalia organized some flights to go back home, but he says they were very expensive and he “would have appreciated a more professional and organised service”.

My plan was to catch a bus to London on Sunday morning, then fly to Rome later in the evening, and land in Italy around 10.30 pm, spend the night in a nearby hotel and then catch a train for Milan on Monday morning. 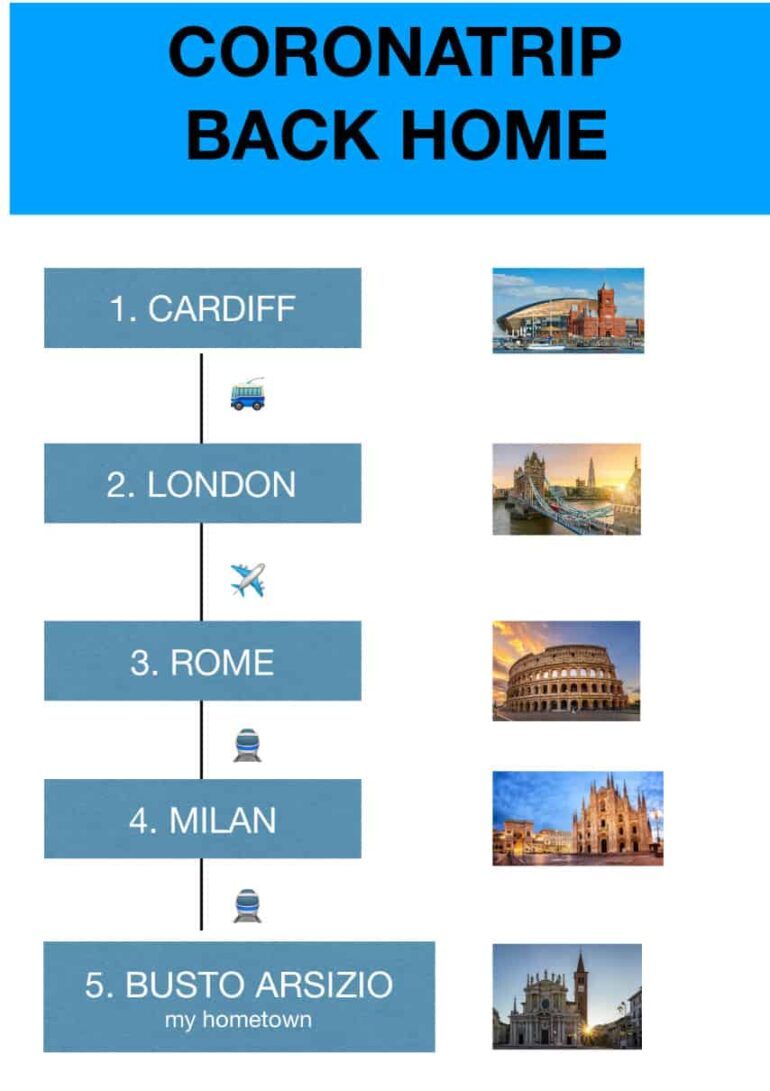 But little did I know, the worst was yet to come. I emailed the Italian Embassy, asking them if the flight to Rome was guaranteed and they answered that this was completely up to the airline company, so I just had to wait and see if the flight was cancelled or not.

On top of that, I read on the Alitalia website that they only allowed people with face masks to get on the plane, and of course I didn’t have any, since they were all sold out, incredibly expensive, or they would have arrived too late. Fortunately, my parents at home did have some spare masks and they sent them over through post. It was an absolute nightmare, as they came three days later, but in the end I managed to have my mask for the flight.

So, I had to very quickly pack all my belongings and empty the whole house, which was very sad and felt surreal, as I was not expecting to leave Cardiff so soon. I managed to close my suitcases and on Sunday morning, at 10.30 am I got my bus to London Heathrow. It was a very long journey, which took more than 4 hours and it was quite stressful, as most of the people who got that bus were trying to go back home too and had far more suitcases than the bus could hold, so the driver went absolutely nuts. But somehow, we arrived at the airport.

I wasn’t expecting the airport to be very busy, as precisely that morning the British Prime Minister, Boris Johnson, told his citizens to avoid all unnecessary travel. But I was wrong. The airport was incredibly packed and crowded and very few people were wearing masks or were protecting their faces. 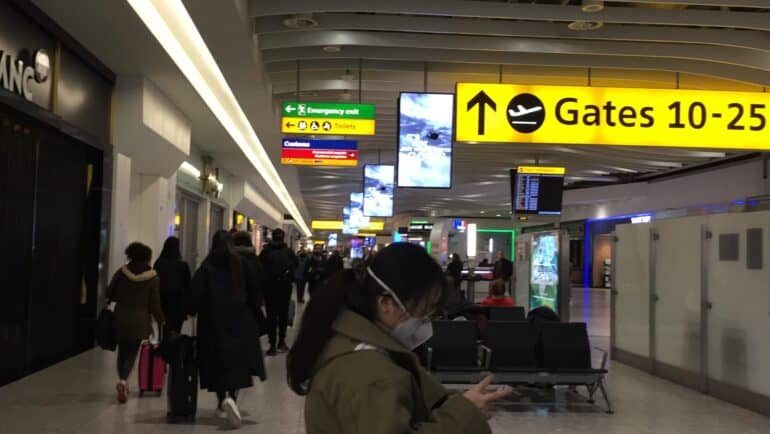 After a long afternoon, the flight was delayed, but after an hour we finally boarded and the plane too was completely full. But everyone was wearing masks and the flight attendants took all the possible precautions to social distance.

We landed in an empty Fiumicino (Rome’s airport) at 11.30 pm and we were immediately asked to distance ourselves and leave at least 1 metre between each other. After that, we very slowly created a queue and we were given the so-called autocertificazione, which is an official document that everyone in Italy needs to fill in when they leave their houses. We had to write down our personal details and give information on where we were coming from, where we were going and why we were travelling. After we filled the form, we had to go through security where the police checked our passports and documents. 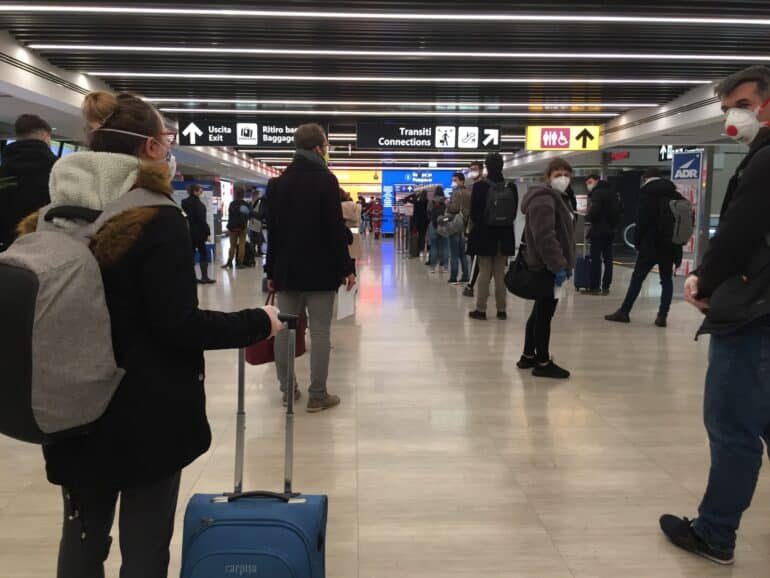 Finally, we were able to leave the airport. Because it was already midnight, I didn’t know anyone in Rome and there was no public transport to reach the hotel, I had to get a taxi, that costed me €25, for a 5-minute drive.

As you can imagine, I was pretty mad, but I had no other option and I can understand that taxi drivers too are going through a hard financial time. And, on top of everything else, whilst I was in the taxi I got an email from the train line company saying that the train I was supposed to get the next morning (after 9 hours) had been cancelled.

Despite being tired and stressed, I searched for other ways to reach Milan the next day, but all the other trains had been cancelled. In the end, I decided to take another Alitalia flight from Rome to Milan Malpensa for Monday, at 1.15 pm. I didn’t like the idea of further polluting the environment with another flight, but that was the only solution I had left.

The next morning, I put my face mask and my gloves on and I got a bus to the airport. I had to go through security again, fill in another autocertificazione, explain to the police why I was travelling and finally I managed to get on the plane for Milan.

This time the flight was less busy and we managed to keep good distance between all passengers and finally, at 3 pm, I landed in Milan. Once again, we were asked to show our documents and we all had our temperature checked.

I got another taxi to go back to my hometown and I am now self-isolating in an apartment away from my family. However, because I cannot leave the house, my parents bring me food and I can see them from the other side of the road.

My GP told me to self-isolate, to check my temperature every day and to contact him in case I showed any symptoms. Two weeks have now passed and I am fortunately healthy, so in a couple of days I will go back to my family home and continue to quarantine there.

I would like to conclude saying that my choice of repatriation was a very personal one, and I am not saying that it was the best. I understand that other people have decided to stay in the United Kingdom and I completely see where they come from.

Lucrezia, an Italian girl who lives in Cardiff, said: “It seemed absurd to return to Italy, exposing me and my family to a possible risk of infection. The journey would have been long and I would have had to go through half of Italy (as Alitalia only connects London to Rome) risking to be a vehicle of contagion.”

However, for me this was the best solution and I took all the measures to protect myself and other people and I have not left my house during this period, nor do I plan to leave my family home until the government says it’s safe to do so.