Weekend getaway to Lucca: a peek behind the Mura Urbane

Enclosed within its famous Renaissance-era walls, Lucca is a small, yet richly artistic city between Pisa and Florence. For a pleasant journey outside of Rome, Lucca is a city worth spending a weekend getaway in, or at least visiting during longer trips around Tuscany. Panoramic views from medieval towers, strolls atop old defensive walls, and museums housing masterpieces of Italian art supply visitors with unforgettable experiences and sights in Lucca.

How to get to Lucca

From Roma Termini, you can travel to Lucca in three to six hours depending on the type of train. Soak in the scenic view of the coast—perhaps while reading Tim Parks’ Italian Ways, a portrait of Italy through train travel—before reaching Pisa. Trains from Rome to Lucca require a connection at Pisa, so you might as well take a few hours to explore the Tuscan city, indulge in a yummy lunch, and snap some pictures of the Leaning Tower. Since trains between Pisa and Lucca complete the 30 minute commute frequently and only cost €4, buy a separate ticket to Lucca after you’re done exploring Pisa. Click here to buy your train ticket.

If you plan on going by car, you can rent a car over at StylishRent.

What to see & do in Lucca

After a few steps from Lucca’s train station, you’ll see its looming walls come into sight. Since the city became a Roman settlement in the 2nd century B.C., its protective walls have been demolished and rebuilt until the Renaissance. The enclosure contains three gates that pull cars in and out of the city, and from within Lucca, you’ll spot pedestrians walking and bicycling on top of the walls. In the 18th century, the defensive barricade was transformed into the Passeggiata delle Mura Urbane by adding a wide street atop the walls for pedestrian pastimes. Make sure to rent a bicycle or walk a few laps on the elevated track, which provides beautiful views of the surrounding mountains and easily immerses you into different parts of Lucca. Long ramps descend from the walls at various intervals, dropping you along the city’s edge where you can then enter the labyrinth of streets. 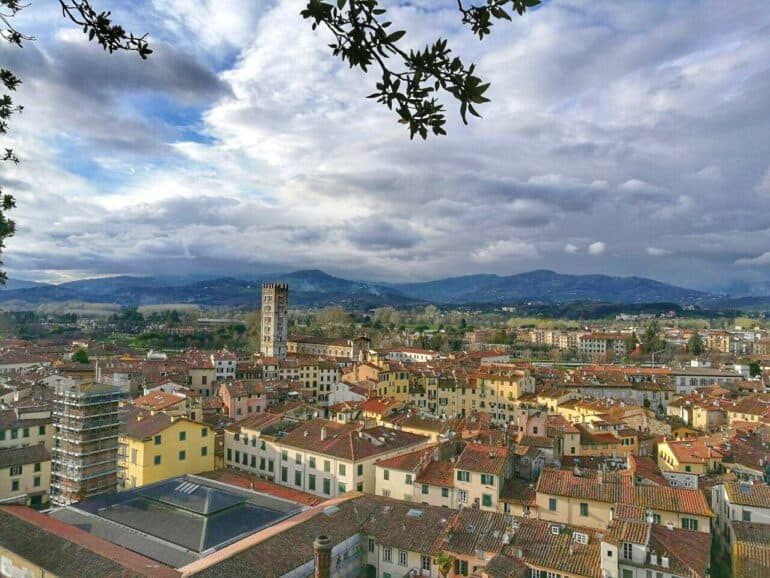 Encircled by Lucca’s walls is a refined, cultivated city with incredible museums, churches, piazzas, and palaces. You won’t miss any of Lucca’s medieval towers, such as the Torre Guinigi and Torre delle Ore (Clock Tower). From atop of the Torre Guinigi, which you’ll spot from the bundle of trees on its roof, you’ll get a breathtaking panoramic view of the city.

From the ground view, you’ll spot St. Martin’s Cathedral, Basilica of San Frediano, and San Michele in Foro, a basilica built over the ancient Roman forum. These structures are just a few of the churches that display the cultural richness of the city, exhibiting architectural influences from ancient, medieval, and Renaissance times. 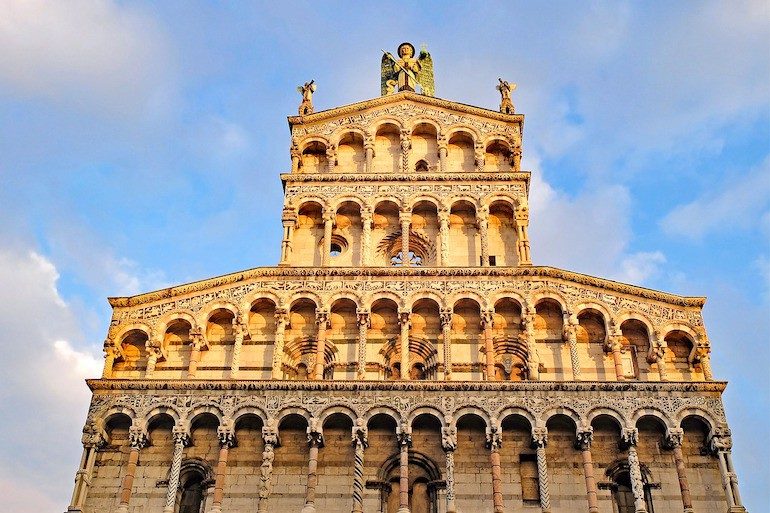 Lucca’s rectangular grid, a remnant of the ancient Roman street plan, also guides visitors to the Piazza dell’Anfiteatro, another walled enclosure within the city. The ring of buildings mimics the 2nd century B.C. Roman amphitheater, and is the perfect spot for dining or rejuvenating yourself with a hot drink since it holds many trattorias and cafes. 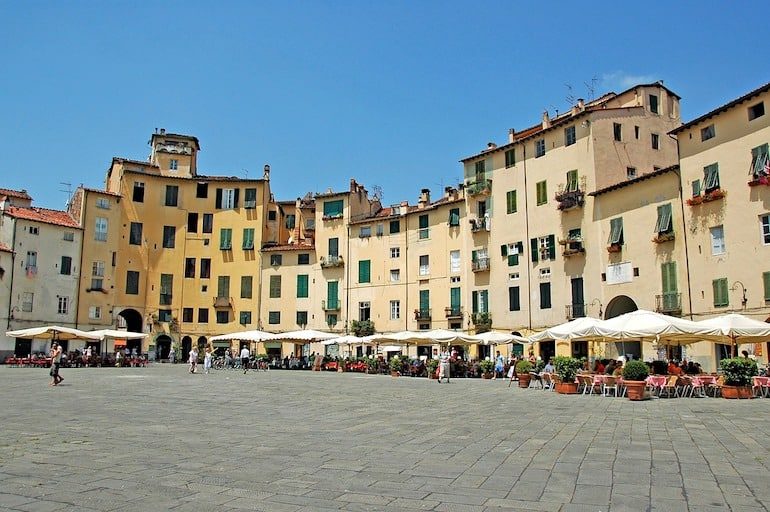 Before leaving Lucca, stop by the National Museums of Villa Guinigi and Palazzo Mansi. The Villa Guinigi museum, a refurbished villa from the 15th century, holds Italian masterpieces from a span of artistic traditions, from the ancient, to renaissance, to the neoclassical. The gallery inside Palazzo Mansi features original tapestry collections from the Mansi family, as well as post-19th century art collections. If you love nature as well as art, stroll through the botanical gardens (which are open during the summer months) just below Porta Elisa before ascending back up to walk the urban walls. 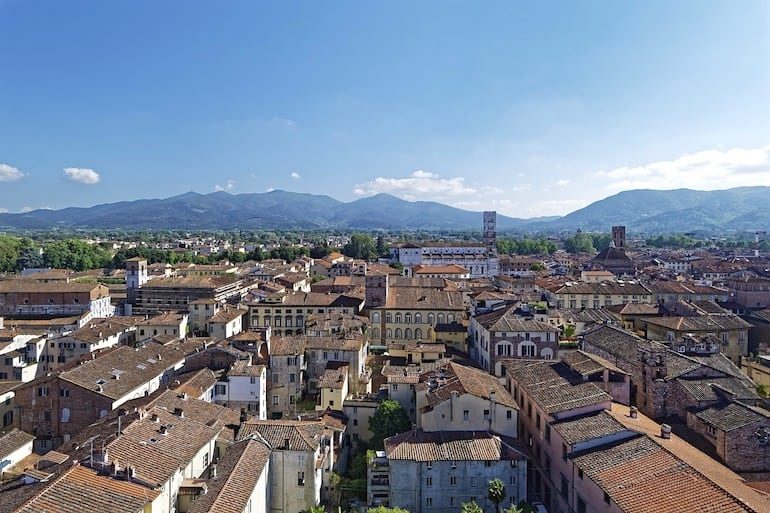 Besides the architectural sights to tour around Lucca, the city also hosts annual festivals dedicated to music, comics, and film. Every summer, the Festival Puccini produces Puccini’s operas and animates Torre del Lago. Lucca’s Comics and Games Festival (held in October), attracts national and international audiences who are passionate about comic books, films, fantasy games, and cosplay. In April 2019, Lucca will have its annual Film Festival, which will feature screenings, exhibitions, and conferences about cinematographic culture.

Lucca may be small, but it is densely compacted with artistic and architectural treasures and remains a cultural hub for annual festivals. If you’re looking for a short weekend getaway from Rome or traversing through Tuscany, Lucca is a worthwhile destination.