The other night I was invited to a friend’s house for an impromptu dinner. I arrived at his palazzo around 11pm and even waiting on the street I could hear Bellini’s opera ‘Norma’, the aching cry of Maria Callas wafting from his open shuttered windows. These balmy nights render Rome so smug, ever conscious of her effect on the romantic. His apartment is the stuff of centro storico fantasy: polished wooden floors, high ceilings and trussed timber beams, vintage lamps, Persian rugs, a Renaissance tapestry on a whitewashed wall, antique sofa and provocative art of lovers kissing. He has a glass of wine and a plate of prosciutto and burrata – arguably the most sensual of cheeses – waiting for me on the table while he checks in the kitchen that the pasta is al dente and not troppo cotta – a fate that can definitively ruin an evening for any Italian. 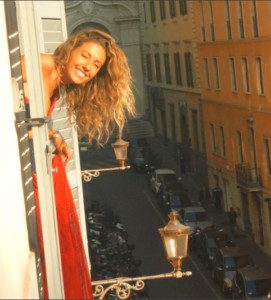 Over dinner of steaming plates of pesto linguine we speak of Gabriele D’Annunzio’s classic book Il Piacere (The Pleasure), the story of an aesthete living in Rome in 1880 with a hunger for the decadent and the exquisite experience of being in love with two women. The conversation segues swiftly to my friend’s past lovers. He denies having a current ‘flirt’, as they call it here, stealing our English term, however, his telefono flashes incessantly throughout the evening and after two years living in this city, I’ve learnt to take la verita’ as merely a version of the truth. The Italians who tell you they are seeking an affair of the heart that is clear and direct are probably lying. They love to play. They appreciate the art of flirtation, whether through a well-crafted (and timed) text message or uno squardo, a ‘look’, from a stranger passing you in the piazza.

This elegant friend of mine, who dons linen trousers, loafers and vintage tailored jackets with a silk foulard in the pocket, is, like many of my friends here in Rome, a fusion of the traditional and the modern. I’m reticent to oversimplify ‘the Italians’ as a collective group – but we’re expats – it’s what we do, particularly in a city as mythical to the foreign eye as Rome. Every time I’m almost convinced that it is foolish to define Italians as having a common demeanour or sense of morality, I find myself in the company of yet another local who personifies the I-have-seen-the-world-yet-I’m-irrevocably-Italian archetype.

They are in no rush to marry or have children and yet both sexes have a clear idea of the type of woman who is ‘da sposare’ (the ideal woman to marry). They find flaw in how their country functions, however, remain fiercely devoted to their cuisine and will gladly eat cornetti and pasta every day of the year. They believe the ‘dolce vita’ is a tourist’s naive perception of what is in fact a chaotic and arduous lifestyle. And then when there’s a public holiday 95 percent of the city, irrespective of socio-economic class, takes an extra day off work for a long weekend by the beach in the family’s seaside residence, feasting on ubiquitous dishes like buffalo mozzarella, cakes made by someone’s mother, or other delights Anglo Saxons would place firmly in the realm of the gourmet. They speak decent English after the requisite holiday or work experience abroad, yet will hardly ever consider watching a film without Italian dubbing. They never go to church on Sundays but there are still a few things like sex or homosexuality or abortion that are not discussed with nearly as much candour as in other countries. They follow our celebrities, our music, our TV shows with a certain reverence for all that is categorically cool and modern, yet at the end of a night out on the town, you will find young Italians wrought with nostalgia, all singing Jovanotti, Vasco, Lucio Battisti or even Pino Daniele in unison.

Locals often say, “Rome would be wonderful if it weren’t for the Italians”. But I adore these people with their contradictions; their lust for all that is foreign and their loyalty to (almost) all that is Italian. I wouldn’t want to live anywhere else in the world.