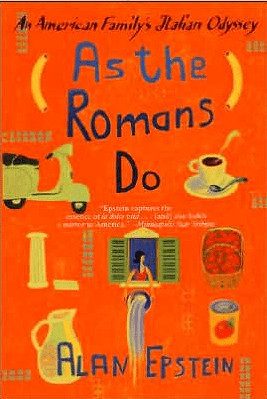 I didn’t really need to meet Alan Epstein in person. The interview was a pretext. I could easily have written this article merely referencing his book As the Romans Do. It’s not as though the book has just come out either; it was published in 1997. But when I read his story of an American man who fell desperately in love with Italy and decided to move his family to Rome, I was dying to know whether over a decade later he still lived here and, more importantly, whether his ardour for the city had waned. One critic labelled the book “a love letter to Rome”, however, the elaborate detail in which Epstein writes about the Romans’ sex lives, families and eating habits, shows that even then, he had more than just a rose-tinted day-tripper perception of the Eternal City. After two years living here, I’m still entranced yet like any girl in love, I want to know if it’s going to last. And on meeting Epstein, the answer was a resounding ‘si’. While he is quick to admit that not everything in the book still holds true today, I would argue that for any foreigner struggling to understand the mentality of this city, this book is just exceptionally relevant.

Each chapter deals with a different facet of the Italians and life here in Rome, from ‘Latin Lovers: Real Men Don’t Wear Sneakers’ – a study of the inimitable charm of the Italian men – to ‘Business, but Not as Usual: Money Isn’t Everything’ and ‘What Makes Romans So Sexy? Close Encounters of Every Kind’.

So if you’re struggling to assimilate culturally or simply curious as to how long an affair with Rome can last, pick up a copy and know that, at least for this author, the vita in Roma is still dolce.