Rome gathers for the first time 170 sculptures by Antonio Canova from all over the world, portraying the love story between the artist and Rome

Under the name “Eternal Beauty” the Museum of Rome in Palazzo Braschi is hosting over 170 works by the eminent Venetian sculptor Antonio Canova (Possagno, November 1st 1757, Venice, October 13th 1822) and some contemporary artists.

This exposition, framed within an installation of great visual impact, tells in 13 sections Canovian art and the context that the sculptor found when he arrived in the city in 1779 at the age of 22. For those who don’t know him, Canova is known for being one of the greatest representatives of neoclassical art and the most famous after Bernini. 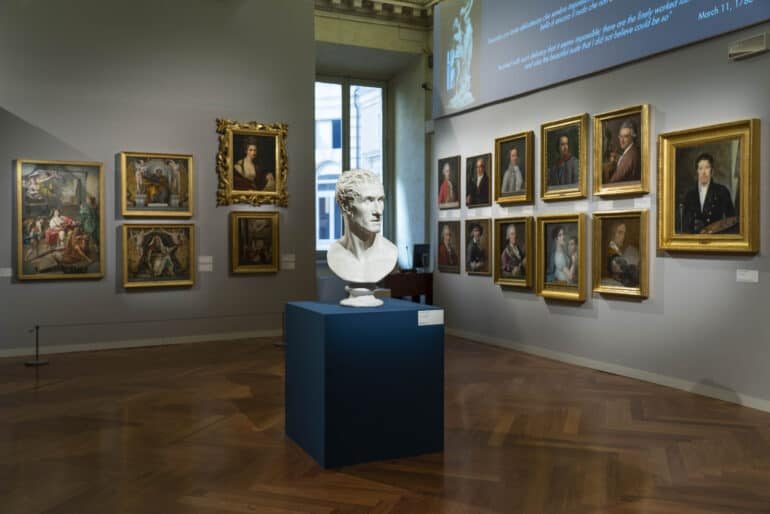 Marble sculptures but also drawing, sketches, models and plaster casts follow one another in the museum rooms in order to retrace the itineraries that Canova followed with the aim of getting to know Rome and grasp its mysteries.

The storytelling of this fascinating relationship between the artist and the Eternal City has been possible thanks to important loans such as those from the Hermitage of St. Petersburg, the Vatican Museums, the Capitoline Museums, the Correr Museum of Venice, the Archaeological Museum of Naples, the National Academy of San Luca and the Antonio Canova Museum of Possagno.

Among these wonderful works that unveil the love story between the artist and the Eternal City are “Cupid and Psyche”, “Hercules and Lica”, “The Penitent Magdalene”, “Perseus Triumphant” or the giant busts of Pope Clement XIII and Pius VII. In fact, the latter was the one who granted him the title of Marquis of Ischia during his period in Rome as general inspector of Antiquities and Fine Arts of the Papal States.

The curator of the exhibition, Giuseppe Pavanello, has granted these giant and pure marble sculptures with an atmosphere as magical as them. Amid the mysterious rooms, one can find angels that rotate and emanate a celestial aura thanks to the latest technologies and also huge mirrors that allow to appreciate each and every tiny detail of every piece of art. But the most special part can be found in a room full of candles that represent what Canova wanted for its sculptures: to be observed through artificial light. It is known that at the end of the eighteenth century, he used to show his works to his guests, by night, in his atelier in Via delle Colonnette.

The exposition also counts with two rooms that host the collaboration of famous Italian photographer Mimmo Jodice, that reinterprets through 30 exquisite shots Canova’s marbles in a new way that enhances their majesty but also their excitement and dynamism.

Reservations are required by telephone before visiting the exhibition and the museum, contact the Call Center on +39 060608 every day from 9.00 to 19.00. Use the Print @ Home to print the purchase receipt or ticket in digital mode to be presented to the access control, at the booked time, without going to the ticket office.