‘Cinema history divides into two epochs: Before and after Roma Città Aperta’, decreed Otto Preminger. In other words, step aside Hollywood. Yet Pigneto’s link with cinema happened by chance. Come 1944, Cinecittà’s equipment, bathroom taps included, were loaded as loot onto 16 goods wagons and shipped to Nazi Germany. Under the Allies, the studios became a barracks, then a refugee camp. To save on film-sets and cast, Roberto Rossellini hit on an ingenious expedient: he filmed recent and even ongoing events in situ. (Some takes pre-date Liberation, the director being forced to change house nightly as the district was searched by Fascist police.) For actors, he used real people who’d often witnessed pieces of the script firsthand, even suggesting them in the first place. No postcard stereotypes here, but life as lived, observed with ‘a tough dry-eyed gaze’, to quote the director. As Renzo, his son, remembers 70 years on, ‘My father described himself as a seamstress sewing Italy’s torn fabric back together again. His aim was to make ‘un film utile’, reminding the world how Italians had also fought and died resisting Nazi Occupation.’ No more so than in Pigneto where a whole street, Via Fortebraccio, was given over to sheltering Allied prisoners.

Film – even in the 21st century – rarely gets more authentic. Railway lines targeted by the Allies from the air and, as in the film, by local partigiani on the ground are clearly shown. So also is Sant’Elena church, though its priest of the time actually died along the tracks behind while trying to help returning Italian soldiers injured during an air-raid. Aldo Fabrizi’s character – Padre Pietro – bears more resemblance to one don Morosini. A fellow prisoner recalls: ‘Imprisoned in Regina Coeli, I met don Morosini after an SS interrogation session, his bloodied face resembling Christ’s after the Flagellation. Eyes shining with the light of his faith, he blessed the execution squad saying, ‘May God forgive them, they know not what they do’. As in the film, 10 of the Fascist execution squad deliberately fired into the air. 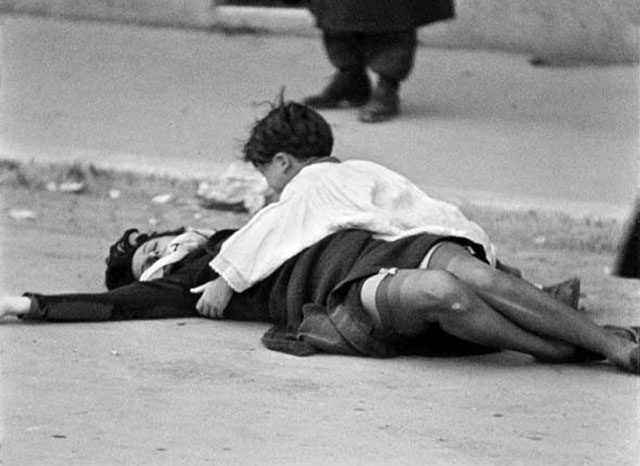 Another ‘film-set’ of itself starts where present-day tram 5 stops: between ‘Friend’s café’ and a Bangladeshi grocer, Via Montecuccoli is now an urban oasis of peace and quiet, cooing of doves prevailing over the rumble of Via Prenestina’s traffic. Again hit rewind, and the pavement in front of house 17 is where Pina/ Anna Magnani was machine-gunned down after seeking news for her vanished husband, Francesco.

In some ways, the film was too realistic for its own good. Renzo Rossellini points out how initially it was not well received. Manfredi, a Communist and Don Pietro, a Catholic priest, had been given equal prominence, so upsetting both sides of the same liberation struggle. Then the film was taken to Cannes, winning the 1946 Palme d’Or,’ before being shown in New York, one cinema giving it a run of a year and a half. World opinion regarding Italy stood corrected. World cinema would never look back. The post Roma Città Aperta era had begun. 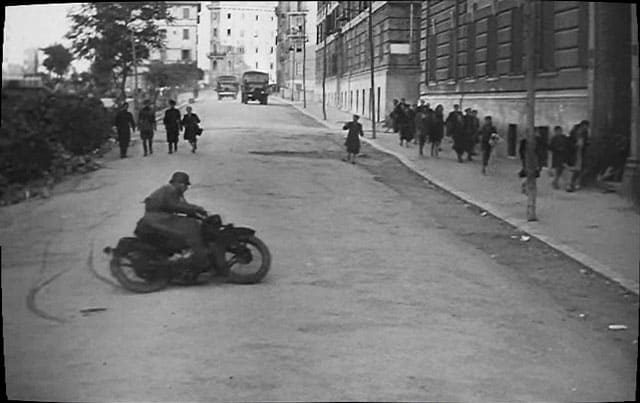 Pigneto, an incarnation of the nitty-gritty, was to cement itself as a set for other neo-realist directors. ‘With its low houses, its cracked walls, Pigneto appeared in all its granular majesty, a poor humble side-street, lost in sunlight, in a Rome that is not Rome’, to cite Pasolini. For his depiction of ‘Ragazzi di vita’ in ‘Accattone’ he chose Via Fanfulla da Lodi. Overlooking it, (courtesy of a giant mural) Pasolini’s eye still presides. Other films are Vittorio De Sica’s ‘Il Tetto’, Monicelli’s ’Un Borghese piccolo piccolo’ and ‘Bellissima’ by Visconti. Then there’s ‘Il Ferroviere’, a very ‘Pignetian’ subject, the area having been partly built by a railway-men’s co-operative. Equally familiar is the railway-man’s wine-bibbing, ‘osterie’ flourishing then as now.