All travelers to Rome are pilgrims. You’ll wander long distances on her cobblestoned streets and no doubt explore some of the sacred spaces to be found on every corner of the city. How many of Rome’s 973 Catholic churches will you see? Perhaps you’ll start with the Pantheon, Rome’s oldest and once pagan church, and finish with the world’s largest Christian Basilica, St. Peter’s. The Jewish ghetto of Rome is one of the most beautiful hidden treasures of the city. And take a moment out to see the first Protestant church in Rome, St. Paul’s Within the Walls.

So, why not take it one step further and consider staying in a convent or monastery? You’ll find your accommodation spotless, situated in an enviable position, and even better – it won’t break the budget. There may be a few rules to abide by, such as curfews and silence at certain hours! By choosing to stay in a convent or monastery, you’re not just giving yourself a unique spiritual-cultural experience in Rome. You are also supporting a religious community and their good works for the local poor and homeless.

Tips to keep in mind

Decide if you’re looking for a convent or a guesthouse. In the first option, you become a lodger in the residence of the order, and religious life goes on around you (daily Mass, prayers and other holy and domestic duties). The opportunity to have this view into religious life is a great honor. You may attend a Mass or prayer hour here or there, but with no obligation. It’s very calming for the soul! Alternatively guesthouses, while still operated by religious orders, are more focused on the needs of pilgrims and tourists (perhaps with better facilities such as individual bathrooms, air-conditioning, wifi etc). Each property recommends emailing rather than phoning well in advance for bookings, especially if your group is large or you’re traveling in peak season. Breakfast is included but lunch and dinner may also be requested in advance.

My first home in Rome was only two minutes’ walk from the Pantheon, with the Benedictine Sisters of Charity. For my first month I stayed in this secure and spotless convent which is open to visiting students and pilgrims. I loved staying here, not only for its central position (and the hairdresser around the corner) but for the sweet sisters who made such warm and welcoming hostesses. The convent had a curfew of 9.30pm [now it is 10.30pm except for Saturdays (11.30pm)] which made it complicated to adapt to the Roman way of dining from 8pm onwards, let alone going out dancing! However, as luck would have it, the Mother Superior was particularly accommodating for me and my love of football (soccer). Twice during my month-long stay, AS Roma played at the Olympic stadium and Madre allowed me to re-enter long past curfew, even letting me into the convent herself. 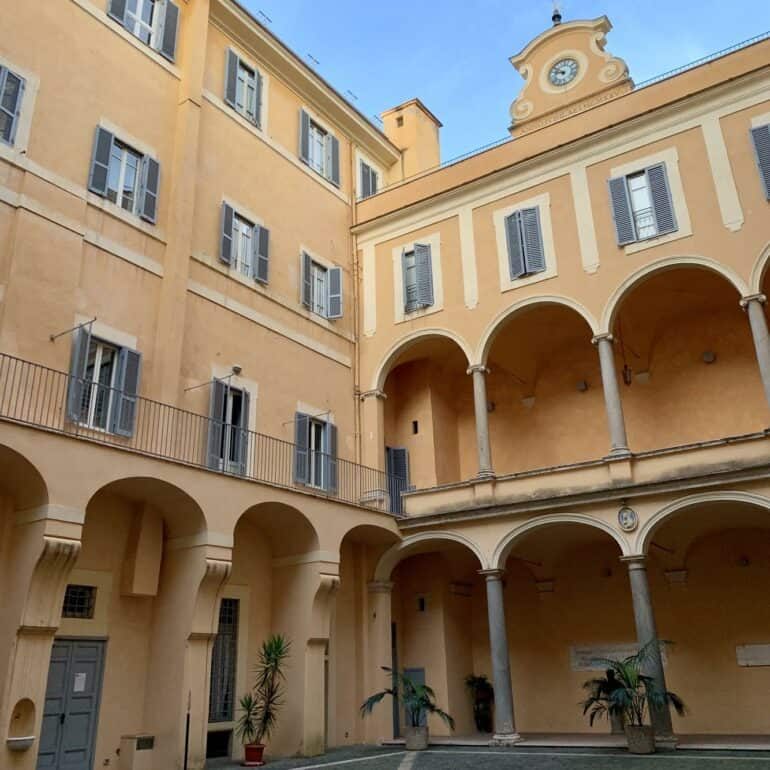 Sister Serafina will likely be the one to greet you warmly as you walk into this bright, modern guesthouse, only a minute’s walk from the Torre Argentina Cat Sanctuary. Every room is fitted with an ensuite and guests needn’t be concerned with curfews. There are none. There is however daily Mass offered in the pretty frescoed chapel and a theater used regularly for performances. 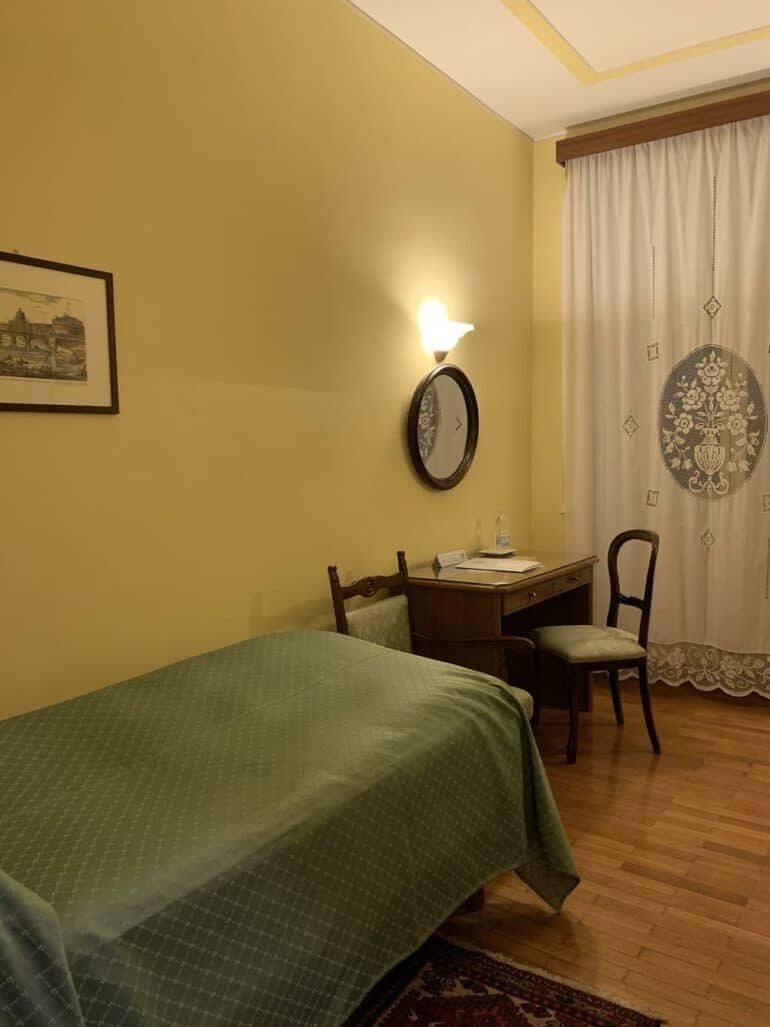 It’s difficult to imagine a better-placed convent in the city than this elegant palazzo facing onto the Piazza Farnese. Mother Gertrude and the Brigidine Sisters – with their striking habits – continue the tradition of warmly welcoming pilgrims to their house, just as they have been since the 1300’s. Swedish St. Bridget died here in 1373 and was made a saint by Pope Boniface IX in 1391. Pilgrims are encouraged to take part in the spiritual life of the sisters, and also make the most of the library sitting room and terrace with bell tower which overlooks Piazza Farnese – perfect for your evening aperitif. 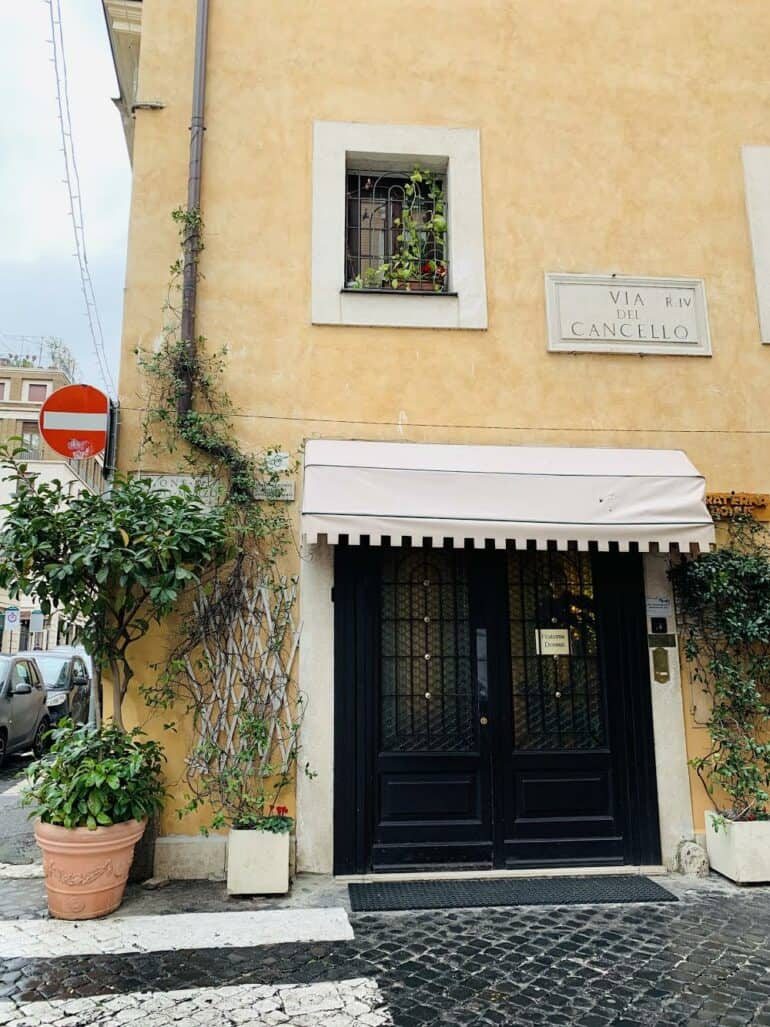 The sisters of Fraterna Domus are well-known locally for their restaurant which is open year-round (except for Thursdays). If you don’t stay, at least drop in for a hearty pasta lunch to give you the energy for an afternoon of exploring the backstreets between the Tiber and Piazza Navona. Sister Cecilia enjoys giving tours for guests and they give food to the poor who knock on the door night and day. 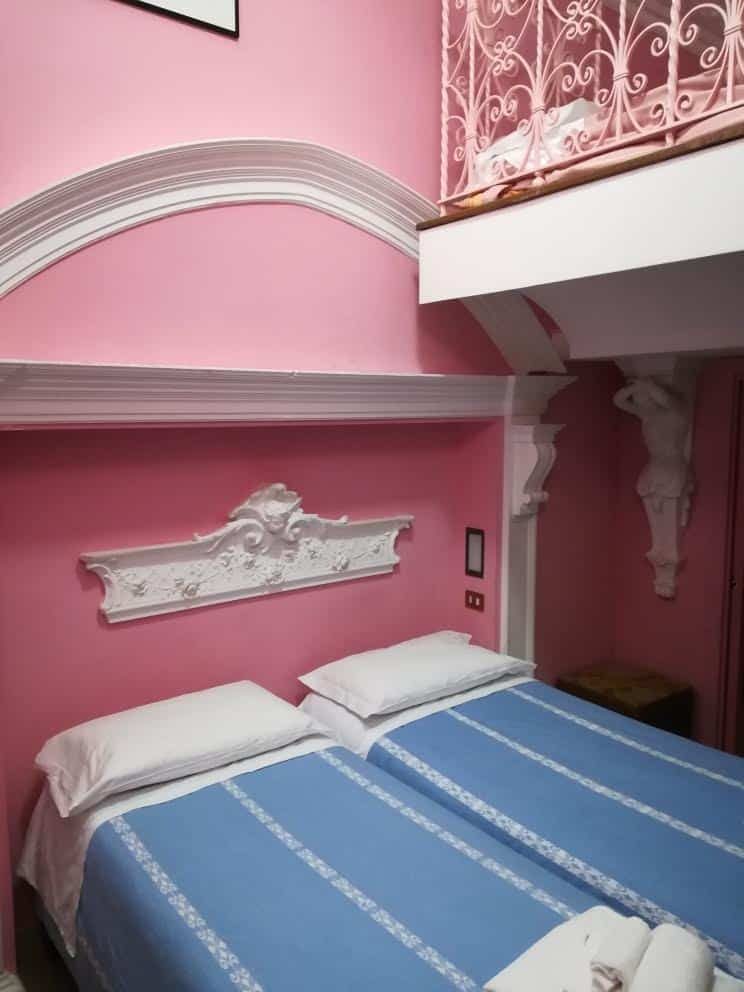 This finely decorated religious guesthouse boasts 40 rooms across five floors, some with views of Piazza Navona and the dome of St. Peter’s. Parish and school groups make regular guests and many students from local Santa Croce University stay for lengthy periods. Guests can participate at prayer times and make use of the chapel. 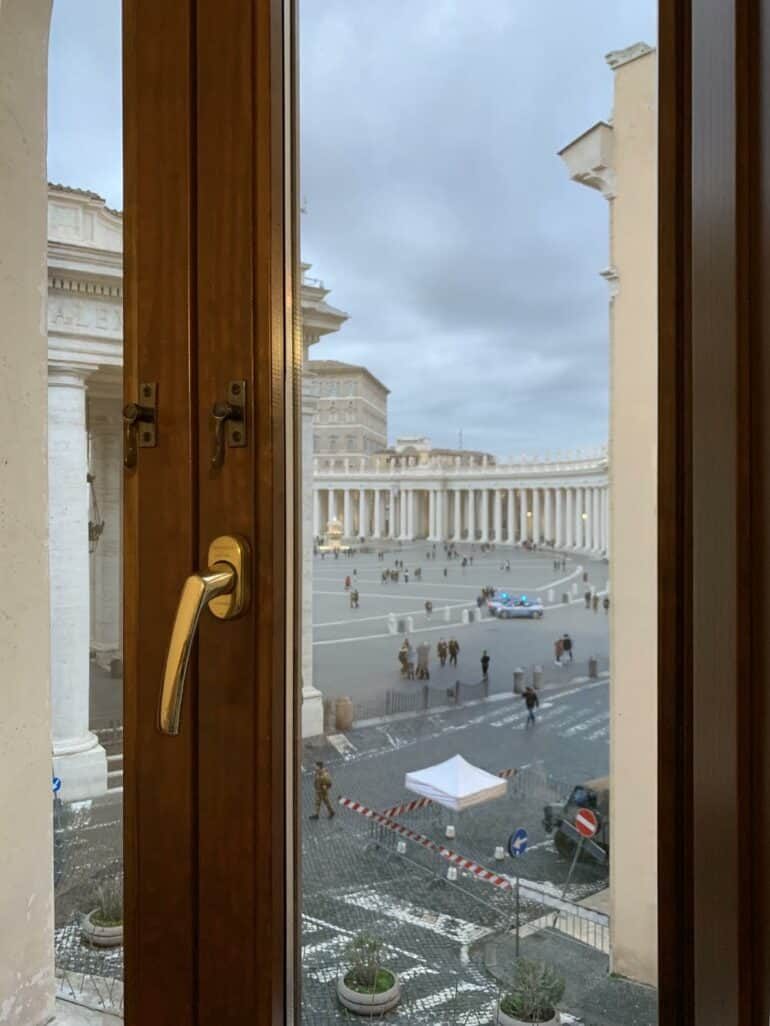 With typical Franciscan hospitality, Sister Grazia welcomes pilgrims as well as many families with children recovering in the local Bambino Gesù hospital. Their front door can be seen from St. Peter’s Square and many of the rooms (including the dining room) face onto the colonnades. The community of Franciscan sisters has been here for over 100 years, offering young people the opportunity to discover their spiritual life as well as feeding the poor on Tuesdays and Thursdays. One touch that I noted was they’ve made electrical outlets available where the homeless can reach them to charge their phones. 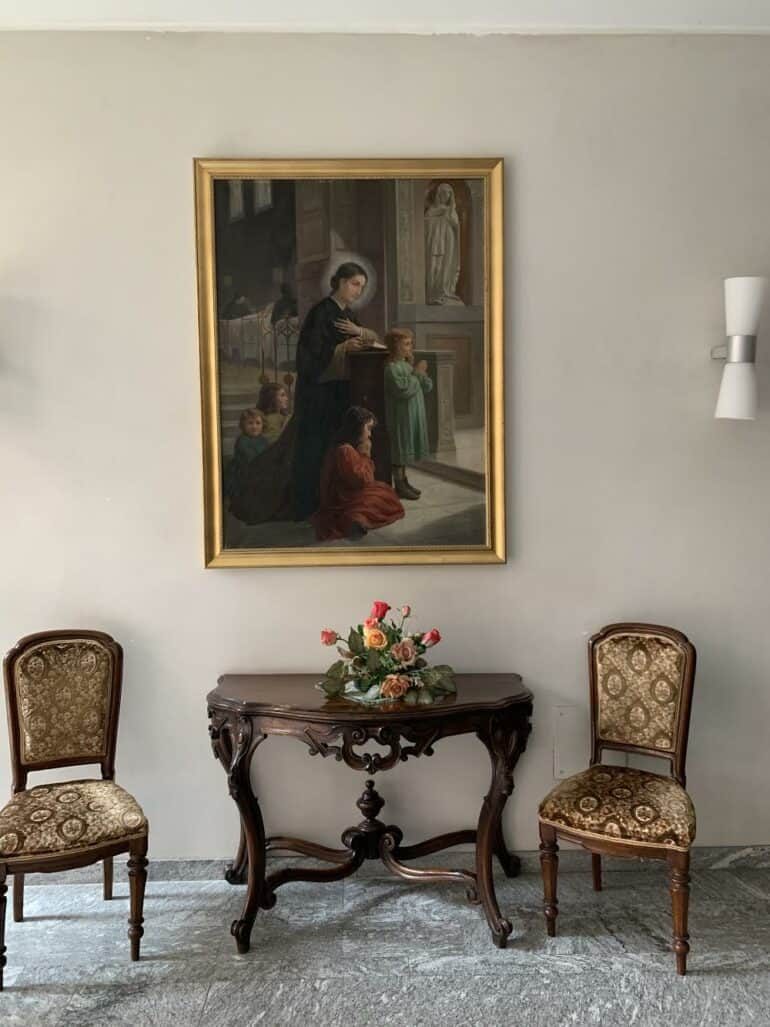 The Sisters of Maria Bambina take excellent care of guests to their convent which boasts sublime views over St. Peter’s Basilica. The panoramic terrace is the ultimate spot to see the Pope at midday on Sundays. This spotlessly clean, safe, and cheerful guest house has been previously recommended to me and I can see why. Pilgrims and sisters alike may take part in the daily prayer life of the convent. Mass is offered daily, except Sundays when one can visit one of the many surrounding churches, such as St. Peter’s! Amongst the conference rooms, there is even one decorated with Swiss Guard pictures. Like the Casa Santo Spirito, the sisters give a particular welcome to families with locally hospitalized children. 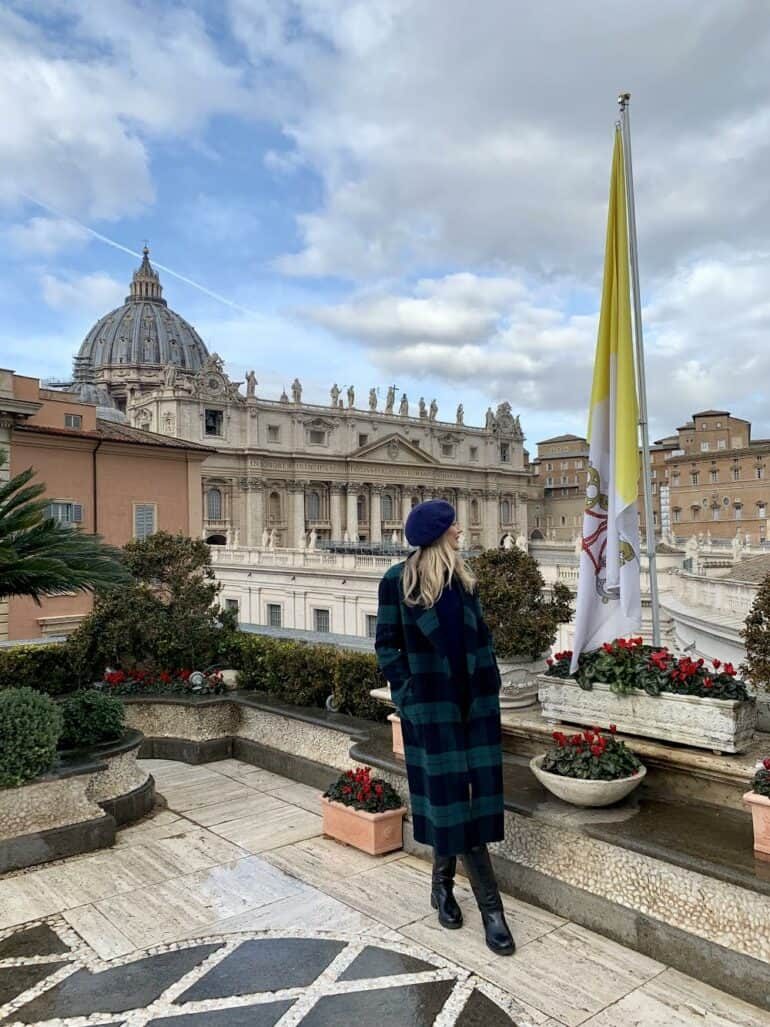 Established in the premises of an Augustinian monastery, the Residenza Paolo VI was inaugurated at the beginning of the Holy Year 2000. Far from a monastic lifestyle, the 4-star residence situated on the Vatican-Rome border provides an elegant haven. Sitting on the terrace, you can almost reach out and touch Bernini’s columns. Some rooms and suites offer a unique view of St. Peter’s Square and Vatican City, which you are perfectly placed to explore. The spirituality, culture and tradition of Rome is on your doorstep.