The interaction between art, science, and new technology

For its eighth edition, the festival – which focuses on the interaction between new technology and art – shows the vertigo of virtual illusions.

Vertigo, that’s exactly what the visitors will feel. The same vertigo that dreams are able to create. Don’t be afraid to go inside the rooms – completely in the dark – where lightning pieces of art are hidden. As you open the first curtains, that childhood feeling of being afraid to go in the dark will come back. You are welcomed by strange moving stars named Instant of Visibility realised by Ivana Franke. The artist invites people to lose themselves, and very quickly they can feel as if they’ve been hypnotised by the inaccessible constellation, floating in a universe between imagination and reality. 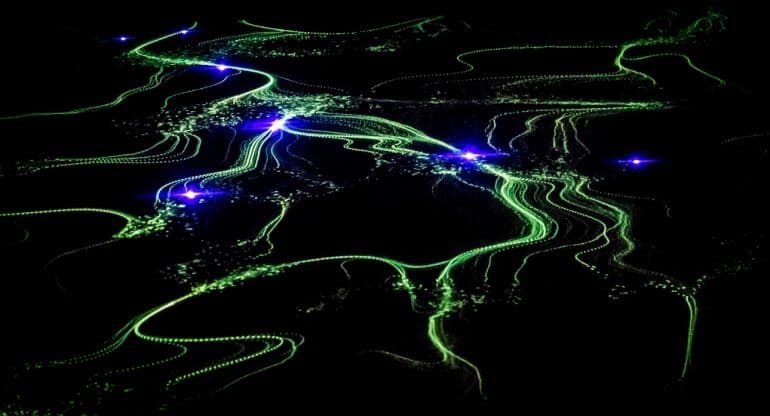 Few steps later, your body will feel more relaxed by the idea of being in the dark: eyes are wide open, ears focused on the silence and you will breathe with the same rhythm of your moves. It’s the perfect moment to meet Robert Henke, or at least his Phosphor which can be a map of the neuronal system, and at the same time an interpretation of the deep sees.

But suddenly, after one dark room after the other, you will be catapulted into the real world again, and your first desire will be to go back into those dark rooms. It’s the perfect moment to visit the installation of Jean Michel Bruyère / LLFKs and Matthew McGinity, Delphine Varas and Thierry Arredondo: La disparition du Fils. Put your 3D glasses on and go inside the piece of art. You will find yourself in the middle of a 180° screen which gives you the feeling of falling in the infinity of a vortex. Vertigo again. The good one. The one you have when you dream.

Digitalife 2017 is a world based on frames, but not just the frames that take you to a path of knowledge and communication, a world of frames that contributes to redefining our identity, or even our identities. This exhibition is a perfect cocoon, a parallel world, a place where we won’t know for sure what we’ll find before going in, but a place we won’t want to leave in the end.