What’s great about the Forum Pass is that along with access to the new walkway, it offers the chance to take in Rome’s most important archaeological sites with a single ticket purchase. If you’re happy to appreciate the Colosseum from the outside (and this is easily done, plus you won’t have to wait in line to get in), the Forum Pass means you can see Trajan’s Column and the Imperial Forums up close and personal instead.

And, for visitors in wheelchairs or people who may have difficulty on the uneven pathways of the Roman Forum, the new walkway section from Trajan’s Forum to the Curia Julia provides an easier on-the-ground experience. The elevator is located on Via dei Fori Imperiali above the Forum of Minerva – on purchasing your tickets at the office you can ask to be shown how to access it.

If you’re a ‘slow tourist’ like me, pack a picnic and take most of the day. If you’re on a big sightseeing schedule, you can scamper through over a morning or afternoon. 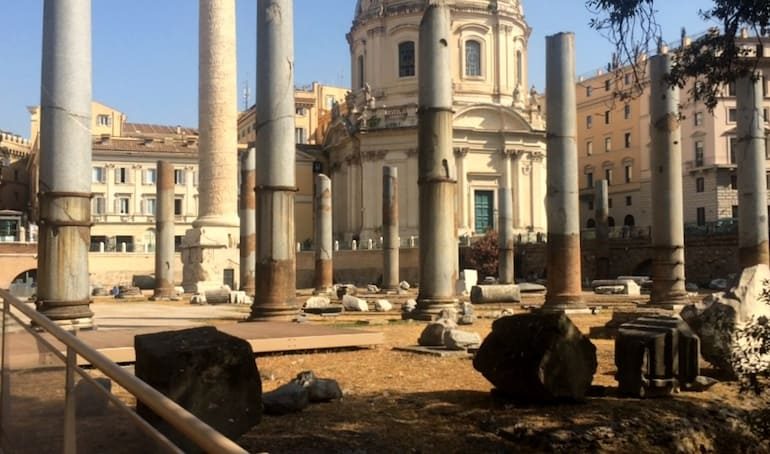 The ticket office at the foot of Trajan’s Column sells exclusively Forum Pass tickets, so pick up yours here. Due to the newness of the pass, you might even find there’s little or no waiting time. By starting with the Forum of Trajan, the last of the imperial forums, you’re beginning a journey back through time. The walkway follows a path that leads to the original Roman Forum – the centre of the Roman world – then to the Palatine Hill, one of the seven hills of Rome and the birthplace of the city.

At the start of the walkway, Trajan’s Column rises high above the forum dedicated to the emperor of the same name. The exceptional relief carvings on the column describe Trajan’s victory over the Dacians. ‘Forums’ began as simple gathering places and markets that grew into sophisticated social, religious and commercial centres. They were also areas to display the wealth and success of the empire – and its individual emperors and politicians. 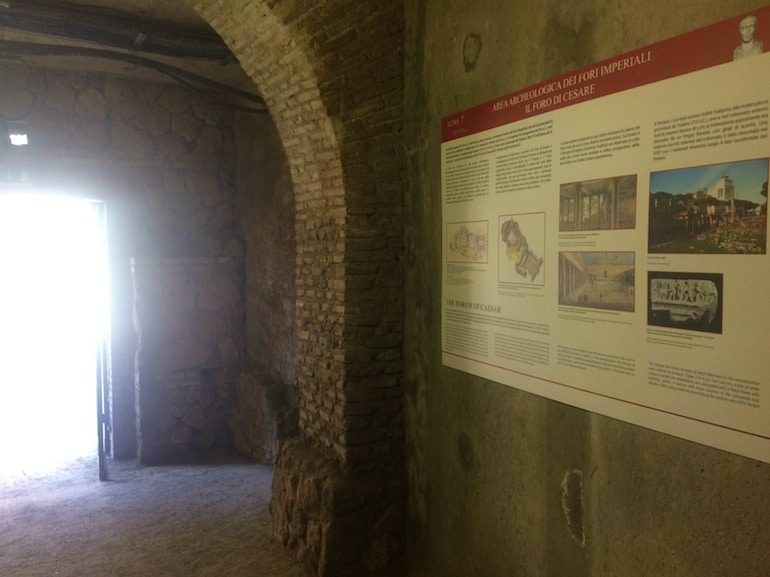 The walkway then passes beneath the road – and the information panels here provide a little extra context for visitors. After all, the forums are fantastically photogenic, but it’s not always obvious what they were in ancient times.

Dream of a glorious past 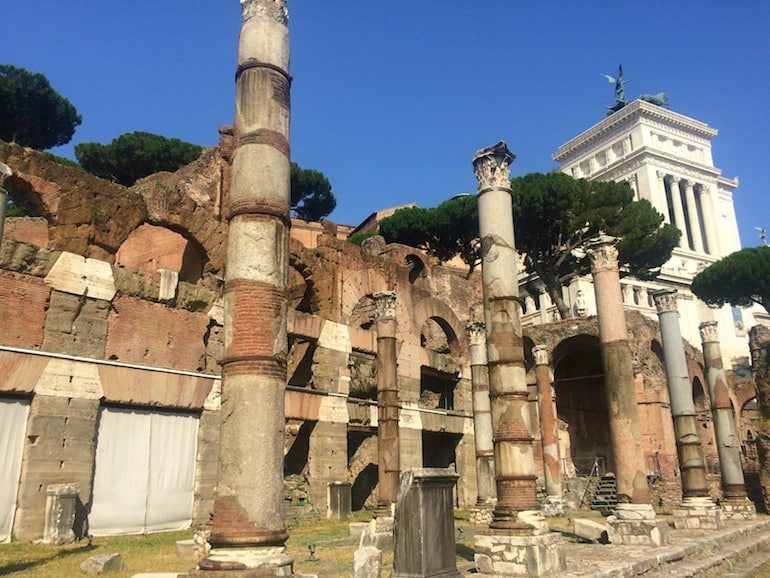 The darkness of the cellars gives way to the sunken area of the Forum of Caesar nestled below the Capitoline Hill. The path continues through forums dedicated to emperors Augustus and Vespasian (also known as the Temple of Peace), then to the Forum of Minerva – the area constructed to connect the imperial fora to the great Roman Forum.

Entering the Roman Forum alongside the solid structure of the Curia Julia – once the meeting place of the famous Roman Senate and dating from 44 BCE – you are now at the heart of the Roman world.

The land of the Roman Forum began its life as a swamp, eventually becoming the downtown city centre and focal point of the vast Roman empire.

There is much to see in the Roman Forum. Visitors can simply take their pick and wander among temples and basilicas built to worship foreign and Roman gods, as well as to house the other important activities of life – commercial, legal and political. 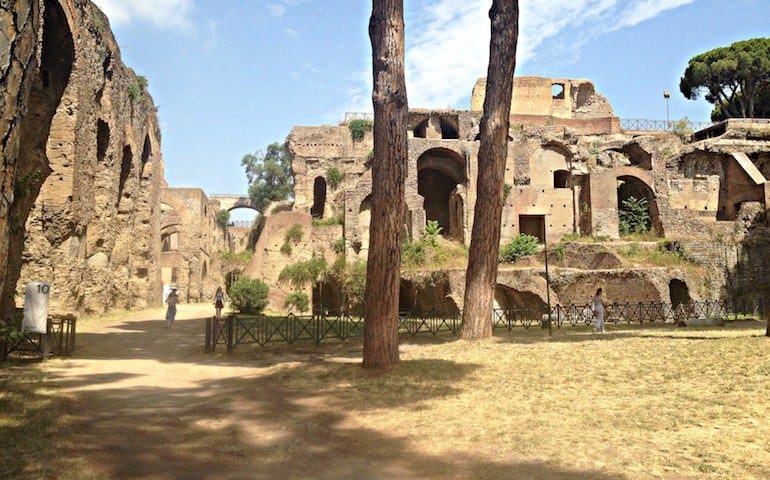 The Palatine Hill is a tranquil green space amidst the dusty ruins of Rome’s ancient world. There are a few ways to reach the hill, but it’s a pleasant walk to enter from the Roman Forum by the trees near Basilica Julia.

If you did bring a picnic, the Palatine is where to find a spot under a tree to eat pizza al taglio or sandwiches – but even just a sip of cold water (available at fountains all over the hill) will taste divine up here among the cypress after walking through the forums in the sun.

The Palatine Hill is the birthplace of Rome and continues to hold a sense of magic. Important temples and the hut of Romulus, the legendary twin who founded the city, were maintained here. The sacred goddess temple of the Magna Mater, “the Great Mother” is located on the western side.

During the Republic (around 500-44 BCE) the Palatine was prime real estate, covered with the elegant homes of senators and aristocrats. Later, from the 1st century ACE, it was where the emperors built their marbled palaces. 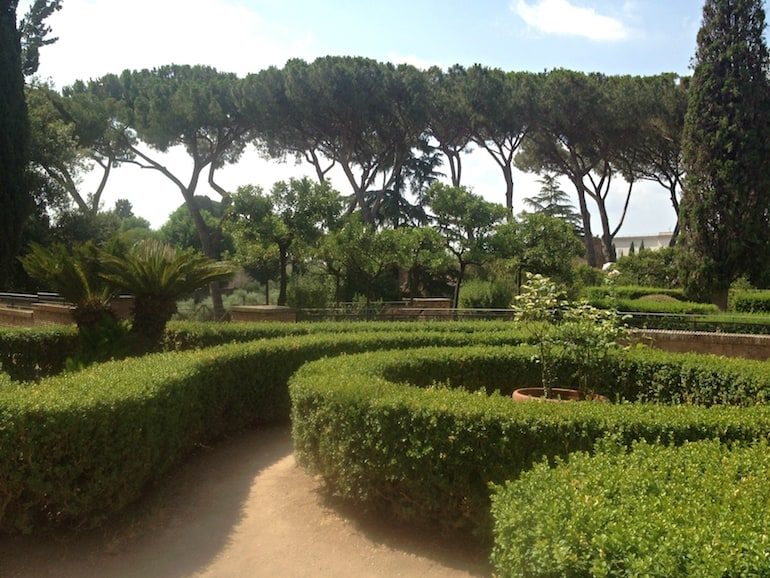 If you’ve already explored Rome, you’ll be familiar with the idea that it’s a city of many layers. Here on the Palatine, you’ll also find evidence of the powerful families who occupied the hill at different periods, including the Frangipani during the 11th and 13th centuries and the Farnese family in the 17th century.

It’s at the delightful Farnese gardens that most visitors will stop to take in the sweeping view over the Roman Forum and beyond to the imperial forums. From up here, it’s easy to appreciate that you’ve walked in the footsteps of emperors.

Note: Some buildings in the Roman Forum and Palatine Hill require the ‘Super’ ticket to enter and may have varied opening times.