With soaring temperatures this summer there is no place cooler to hide than in the secret world beneath the streets of Rome. Explore the catacombs and crypts of the city’s most significant monuments, and unearth some of Rome’s best-kept treasures. 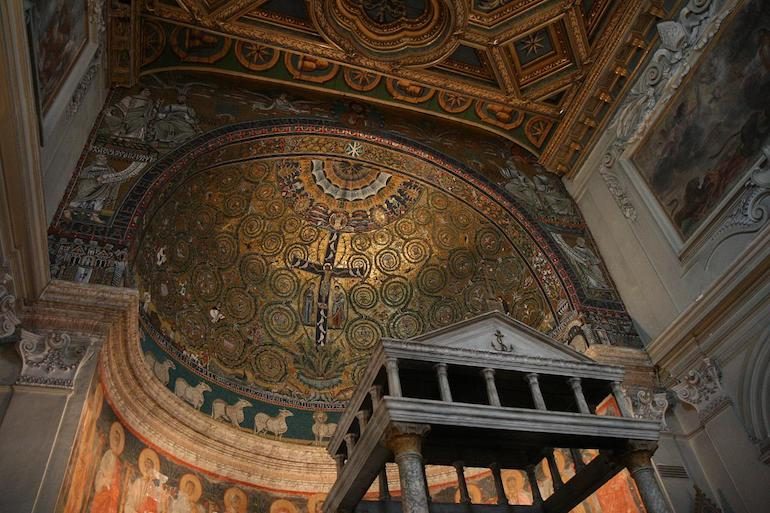 Often overlooked by the nearby Colosseum, San Clemente is a hidden gem that is definitely worth a visit. This three-tiered complex consists of an 11th century Basilica that was built on top of the pre-existing 4th century ”domus ecclesiae” (a secretive meeting room for early Christian worshippers) of martyr San Clemente. Go deeper under the Church and you’ll find a vault from the 3rd century AD. This Mitharic sanctuary consists of stone benches, surrounding an altar that was used during Mitharic rituals, a mystery cult of Persian origin. 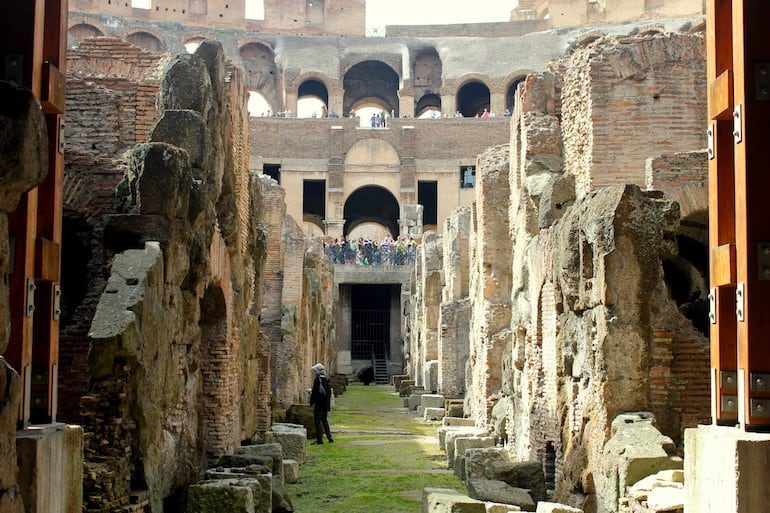 Underneath the world’s largest amphitheatre lie the tunnels and chambers which hosted the mechanisms that made the spectacular battles of the Colosseum possible. The recently discovered hypogeum, from the Greek word for “underground”, is a labyrinth of rings that emulate the oval shape of the arena. Behind the scenes, a vertical winch called a capstan was pushed by slaves to elevate lions, crocodiles and bears into the arena. Walk in the footsteps of gladiators, with a tour group that explores the underworld of the Colosseum. 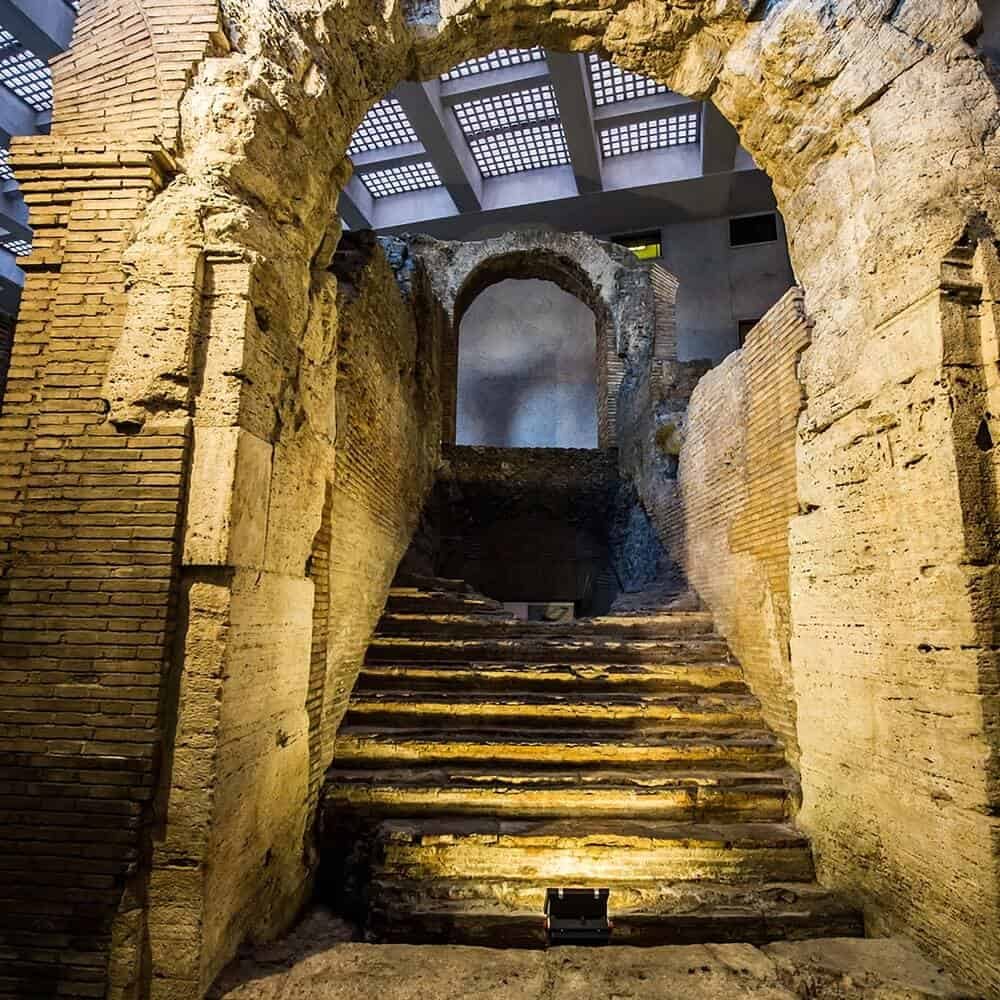 The ruins of the Domitian Stadium (declared Unesco World Heritage Site and subjected to the indirect protection of the Ministerial Decree of April 7th 1954) are located under Piazza Navona at about 5 meters below the street level. The archaeological area is all that remains od the only masonry athletics stadium know in Roman history. 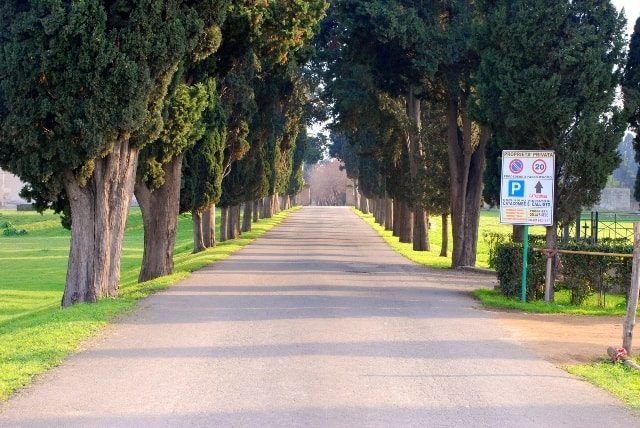 Possibly Rome’s most famous catacomb, this site extends almost 20 km and was the burial place of more than 10 martyrs and 16 popes. As the official catacombs of the Roman Church, the crypt of the popes was known as “the little Vatican” and you can still see the Greek markings “MPT” on two of them for “martyr.” You can also see burial place of Saint Cecilia, the patron saint of music, buried here for five centuries until her remains were transferred to a church in Trastevere. 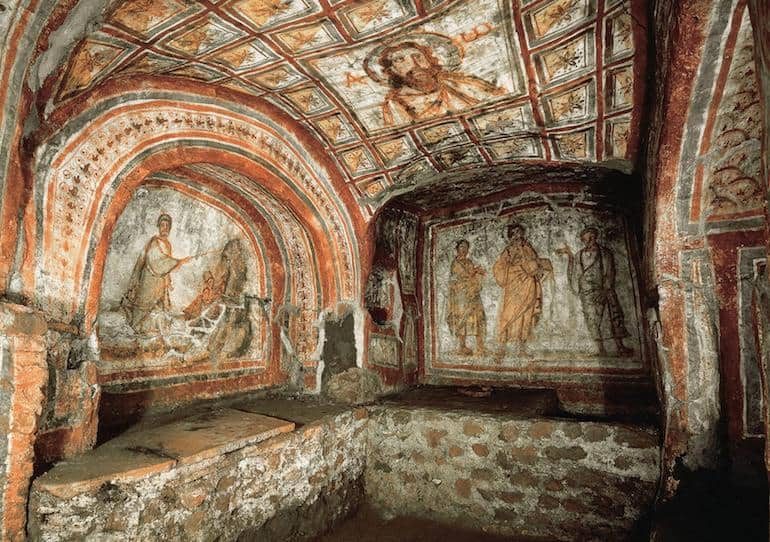 Rome has an array of underground tombs, built as cemeteries for the Christian and Catholic communities between the 2nd – 9th centuries AD. The Domitilla Catacombs are the oldest burial networks in the city and the only site to house real ancient bones. The maze of underground caves and vaults spread over three levels, extending 30 meters into the ground and reaching a total length of 17 km. Access to the passageways is through a 4th century subterranean basilica, which leads to a fascinating 2nd century fresco of The Last Supper.

read more about the catacombs of Rome: www.romeing.it/guide-to-the-catacombs-of-rome 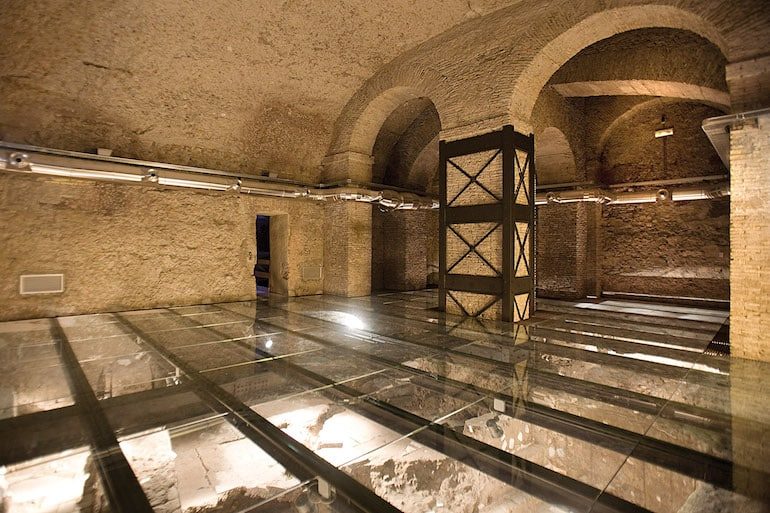 Recent excavations under Palazzo Valentini led to the discovery of the original ancient Roman palace, 7 meters below street level. Enjoy a different underground experience, with a three-dimensional experience of the palazzo: this tour features digital projections of what Palazzo Valentini looked like at its peak.

Hadrian’s Crypt at Santa Maria in Cosmedin (Mouth of Truth)

Escape the long line of visitors queuing up to put their hand in The Mouth of Truth by exploring Pope Hadrian’s Crypt. The basilica shaped crypt is located underneath Santa Maria in the Cosmedin Church, in Piazza Bocca della Verita. It was constructed in the 8th century to store the relics taken from the catacombs by Pope Adrian I. This small underground site is definitely worth a visit. There is no entry fee but a donation is suggested.

The Crypt of the Capuchin Friars 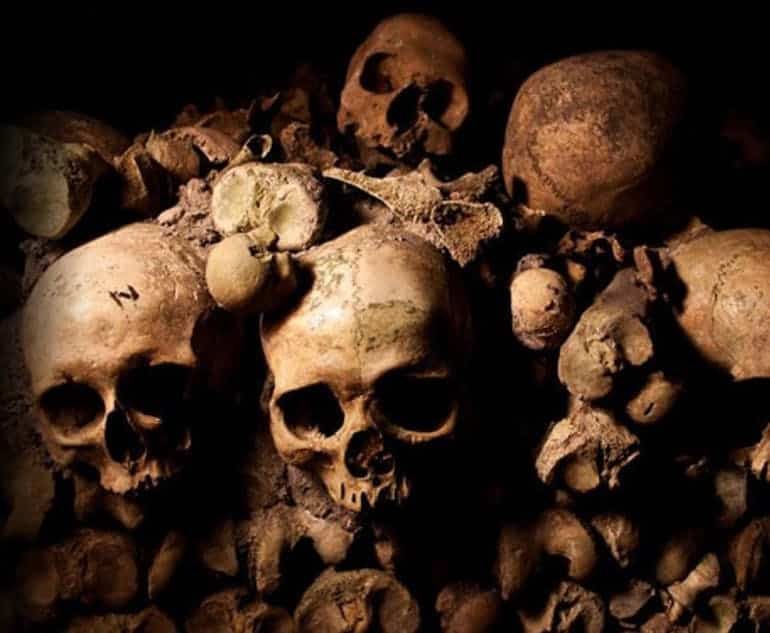 “What you are we were; what we are you will be” is the spooky reminder of the inevitability of life that greets visitors upon entering the Crypt. By far the eeriest site in Rome, this Crypt is made up of the bones of 4,000 Capuchin monks. After visiting the convent and museum, walk towards the dimly lit hallway, where a multitude of messages are conveyed. This spooky corner of the city is the ultimate underground experience. 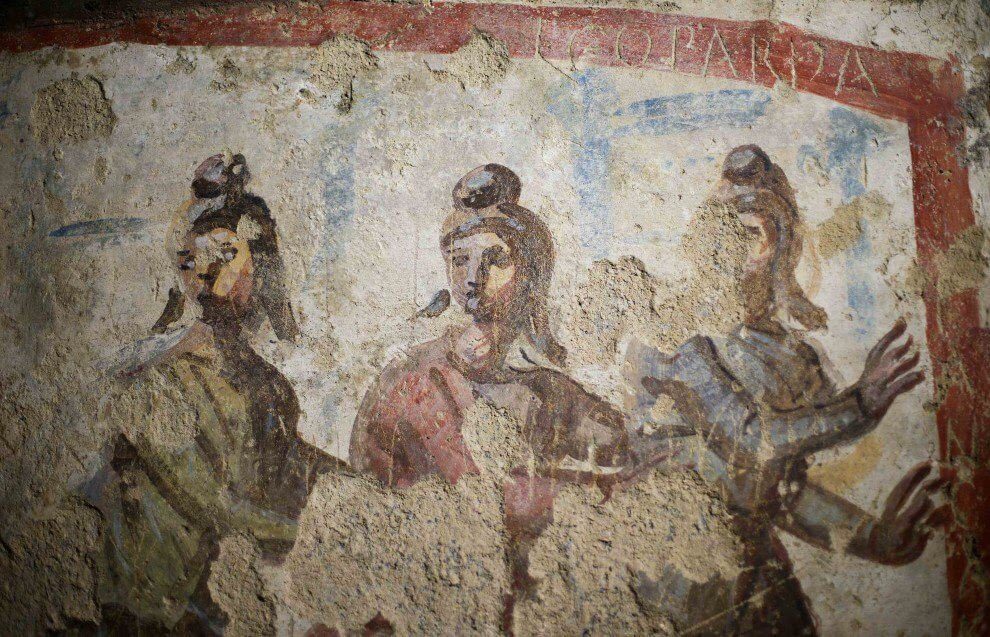 Run by an order of nuns, these catacombs were named after the woman who owned the land in which they were built and were known as the “regina catacumbarum”, or the queen of the catacombs. They are famous for housing the oldest image of the Virgin Mary in existence. There’s also a chilling view point where you can look down and see the three levels of grave sites dug further and further into the Earth to accommodate the dead.