From 27 March to 27 June 2015, an exhibition dedicated to landscape photography by Luca Campigotto opens at the Galleria del Cembalo in Rome, in collaboration with Bugno Art Gallery of Venice, offering a comparison between spectacular natural sceneries and deeply urbanized environments, mostly shot by night.

“I love the heroic dimension of landscapes. The shameless strength of the atmosphere, the beauty of the light. I keep on stirring in a mythical and confused imaginary and catching on camera my own amazement, determined on pursuing beauty”. This is how the photographer describes his shooting.

Luca Campigotto’s images are those of a traveller who recalls the emotions described in the stories of other famous travelers of the past, overlying or alternating them with visionary suggestions coming from the world of cinema or cartoons.

From the Strait of Magellan to the never ending flatlands of Patagonia, from Morocco to the Road of Heroes on Mount Pasubio, from Easter Island to the icy Lapland, the photographer shows the peaceful and contemplative dimension of wild and hidden regions. The strength of the light projects rough and harsh scenarios into heroic views, transforming every documentary perspective into a poetic sight. The images recall the spirit of the places and almost with cathartic intensity give the observer the urgency of developing an authentic ecological conscience. 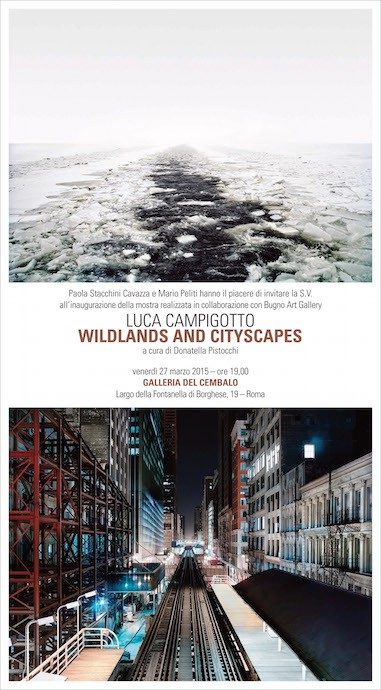 The photographs of New York and Chicago, instead, melt together in a sort of Gotham City reconstructed by the memory, often soaked in a vitreous light and in an atmosphere which is sometimes colourful and sometimes wrapped in soft nuances. From the bridges on the East River to the Empire State Building, from the elevated underground to the theatre “Chicago”, as in a sentimental and visionary travel, each of these shining images seems to be the scene of a movie set.

The exhibition Wildlands and Cityscapes inaugurates on Friday 27th, on the same day of the presentation at the Campidoglio (Rome’s City Hall) at 5 pm of the book by Luca Campigotto Rome. An empire at the roots of Europe (FMR Editions). Furthermore, a selection of images from the book will be on display at the Istituto Centrale per la Grafica (ICG) in Roma, Via della Stamperia, 6.