Many are the names, painted in white, on the mailboxes hanging on a gate in Via Prenestina, 913, Rome. On the side, a yellow sign says: “Metropoliz – Winner Of The Ethical City Contest 2018.” Tall brick walls covered in colorful murals celebrating peace divide Tor Sapienza – a neighborhood on the outskirts of the east of Rome – from Metropoliz, the mestizo city.

Two steps inside the gate and the scenery changes: from the dusty squalor of Via Prenestina – one of Rome’s main traffic arteries – to a collage of colors and artistic themes. Here, 200 people – 70 of them children – from Peru, Ecuador, Eastern Europe, Africa, the Middle East and Italy, all live together as “Metropolizians”.

In 2009, dozens of people from diverse cultural backgrounds came together to occupy this structure – previously a Fiorucci salami factory – united by the same desperate need for a roof over their heads and a way to combat poverty.

The walls and spaces around the building are now covered with murals and artistic installations. Metropoliz, in fact, hosts MAAM, il Museo dell’Altro e dell’Altrove (The Museum of the Other and the Elsewhere), the third biggest contemporary art museum in Rome, where visitors can touch, take pictures, and engage with the art with few restrictions.

At the entrance, an old Eritrean woman eats her lunch sitting on a white plastic chair. In front of her, a big wooden box reads “Entrance – 2 €”. She is Mama Litai, the guardian of the city. Black tattoos decorate her skin. For centuries, in the Orthodox Christian communities of Eritrea, young girls used to get cross tattoos on their foreheads as symbols of beauty. “If you’re looking for Carlo, he is in the dining hall” she says, “ go straight ahead and then on the right. It is easy to find by just following the sound of the people chattering.”

Every meter along the perimeters of Metropoliz’s walls which lead to the dining hall, boasts a new sight, a new skin color, a new art piece. Finally, the visitor reaches Piazza Perù, where the majority of the Latin American community lives. In the distance, children play on a soccer field. In a corner, some laundry drying in the sun dangles in the wind.

The chattering and giggling coming from the kitchen invade the dining room, where every Saturday Metropolizians and outsiders eat together. In this kitchen everyone cooks anyone else’s food: the Roma sometimes cook couscous, Peruvians cook Eritrean food, the Italians enjoy it all.

The corridor towards the dining-hall is plastered with images and colors. Hanging from the ceiling are numerous art pieces, many of them carrying a strong political message. At the end of the corridor, an artist installs her new piece, surrounded by three exuberant Roma children who are helping her out. “My name is Andrea,” one of them says “and she is Christina and she too is Christina. Two Christina’s! We live here, we go to school nearby. We are helping this artist to create this thing. Carlo is eating now”.

Andrea points her finger towards the dining-hall, where Carlo Gori is sitting on a chair, speaking and gesticulating, caressing the head of a Roma child. He is an artist and a citizen of Metropoliz. To the Roma kid’s calls he gets closer. “I bet you want to know more about this place”, he says. “The first thing one has to remember, is that Metropoliz is with the “z”. The “z” of Zorro. This is not only a city of the future, dedicated to everyone’s rights. It’s also a place in which all of these people came and took their rights on their own when nobody wanted them to. When you don’t have a residence, you have no rights.” Gori walks slowly, he is not in a hurry. In Metropoliz time seems to slow down.

“We call Metropoliz a Mestizo City because it’s the home of so many different people. We have a real beauty of a population. Or as most would think these days, a real ugly population. Because these are the ugly, the dirty, the poor, those who all bother us a bit”, he says. 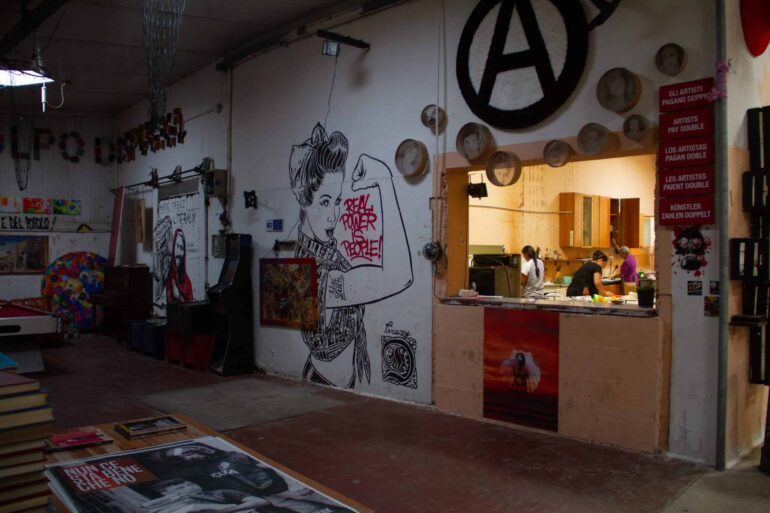 Years ago Gori was called by Blocchi Precari Metropolitani, an organization behind numerous squatting and housing projects in Rome, to be a mediator between the citizens of Metropliz and the district of Tor Sapienza, which was famously resentful toward poor immigrants setting in its neighborhood.

“Usually people choose inhabitable spaces for their occupations. I don’t know, a school? Offices? Here we had to do everything from scratch”, says Gori while strolling next to a giant fried egg lying on the floor, an art piece called Monument to a fallen, by Salvatore Cammilleri.

Metropoliz is at the top of the list of the evictions planned by the Municipality of Rome. “Do you know what the police do when they want to kick you out of squatting? The first thing they do is to destroy the walls in order to make the place uninhabitable. So we had to find a way to protect the walls. This is how the museum was born”, Gori says, “there are more than 500 artworks between these walls. Some of these walls are worth more than 150.000€. If they destroy them, they become the bad guys”.

A brain-child of Giorgio De Finis, anthropologist and current director of MACRO Asilo – who successfully applied a similar museum model to one of the major capitoline art spaces – MAAM acts as a barricade for the inhabitants of Metropoliz. The artists offer their time to decorate the museum’s spaces for free, yet finding themselves immersed in a lively multicultural space, a living organism, an incubator of ideas, a launching pad towards the moon (https://youtu.be/R55p-aI0jr0), leaving culturally and humanely enriched. MAAM is also a bridge that connects two opposite poles of the city: the beautiful and the ugly; the usually segregated world of art, and poverty; the neglected outskirts and everyone else.

Gori walks up the flight of stairs that brings to the playroom where Metropolizian children play and study. “In the beginning, you couldn’t live in this place even if you wanted to. There were rats running on your feet.” Now the space is a luminous room. A giant green blob painting slides down from the wall inundating the floor. Painted frogs color the big windows. These are the first artworks ever created in MAAM.

Two young girls and a boy are doing their homework with a volunteer. A couple of days a week someone from nearby housing projects or neighboring organizations spends time helping Metropolizian children with their homework. Sometimes the parents also receive help in sorting out Italian bureaucracy, driver licenses, and other documentation.

On the ground floor, Gori walks through the remaining bits of what was once the slaughterhouse’s abattoir. Upstairs some children giggle and chitchat in Spanish and Italian, stomping their feet while chasing after a ball. On the ceiling, old slaughterhouse chains and machinery intertwine with pieces of contemporary art. A huge mural decorating the entire room depicts a row of dead pigs hanging by their feet. But at the end of the wall, the artwork depicts the pigs as able to free themselves and fly away. The artwork by the two Spanish artists Pablo Mesa Cappella and Gonzalo Orqìn, is called La Cappella Porcina (The Porcine Chapel). 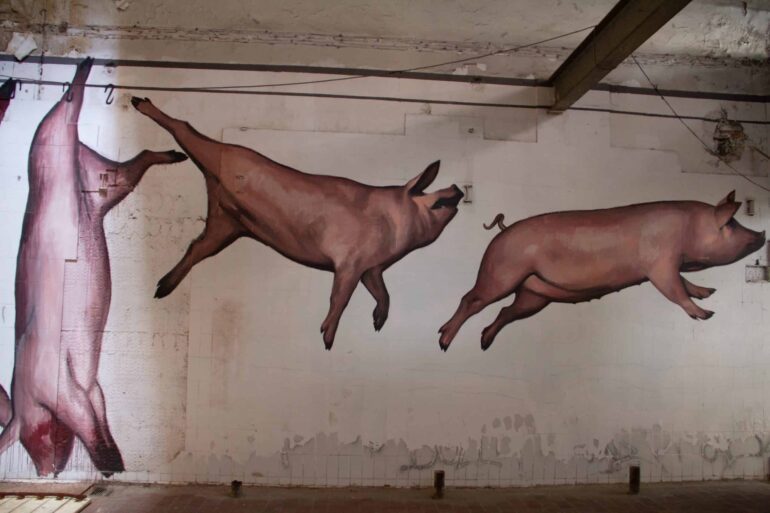 “In this mural, the pigs undergo the reverse process…” says Gori. “Now, here, in Metropoliz, the pigs are all of those who arrive here, without a job, without a home, without a life. When this was a slaughterhouse the pigs came in alive and came out dead. Now we hope they’ll arrive like this, and leave flying, taking with them a newfound dignity”.