An underground movement of caring artistic individuals in Rome has created a hub of social centres in occupied disused venues, theatres and cinemas.

‘When injustice becomes law, resistance becomes necessary’. They came to create a place to socialise open to all and to combat the loss of jobs in our recession-blighted consumerist society. The result is self-funded unparalleled venues home to some of the most unique and stimulating concerts, club nights and events in Rome. In a legal grey area, many live with the fear of closure or eviction like the sad fate of Kunsthaus, infamous occupied multi-disciplinary art centre in Berlin in 2011.They encourage direct and radical democracy where people can feel like citizens of an alternative society that seeks change. Decisions are made in a shareholders’ meeting, ensuring every occupant equal decision-making power, with the low costs of all activities contributing to the continued life of the centre. Social centres in Rome are a hotbed of cultural and riotous growth and an energised inspiring movement that fights to help where the government has failed. 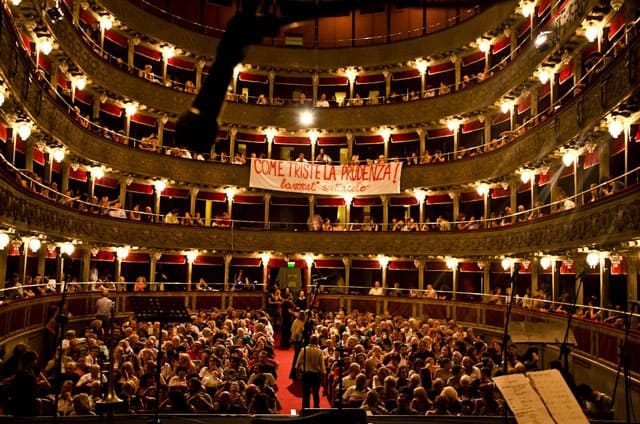 Dubbed ‘theatre of misery’, a group of musicians and actors with a common purpose decided to take over this breath taking 18th century theatre and former opera house going to disuse on 14th June 2011 after a state organization that sponsored Teatro Valle was shut down due to budget cuts for the arts. Now the word on everyone’s tongue for this venue is ‘spectacular’. The unforgettable theatre has four tiers of velvet-covered boxes wrapping the entire back wall with a viewing gallery below. It has been brought back to its former glory thanks to diligent members who gave loving care to such a historically important building implementing a cultural revolt against bureaucracy and lack of government funds for artistic endeavours. The project has grown to encompass a program of music (everything from Balkan and grunge to tango nights), art, theatre, cinema, workshops and artistic training. Their grand arching project works with numerous businesses, artists, musicians and actors. You can become a member of the Teatro Valle Foundation for the Common Good, which has a board of directors who oversee the events, reshaped constantly by current events. They have created a political party called Agorà and say that the city ‘has poured into them’ as a result. It allows free movement of ideas and opinions in an open informal platform accessible to everyone. They are also developing a partnership with universities and performing arts education programs in high schools. Teatro Valle; a wondrous venue and a council that cares. 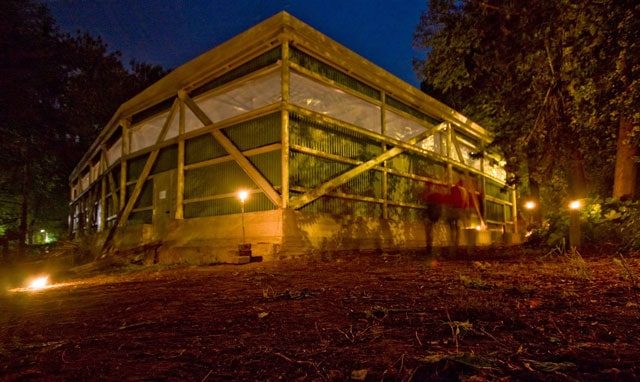 In 2004 Angelomai came to being when an abandoned boarding school was occupied to help 25 families and many artists in need of emergency housing. What followed was the opening of a cultural laboratory for artists to mix ideas and discuss worldviews and events, an experimental space for contemporary art, music, cinema, theatre and new ideas. However Angelomai was evicted and commenced a period of nomadic existence. Far from loosing momentum they were spurred to create a musical super group born within the old walls of the original building called the Angelo Mai Collective and the training facility Bluemotion run by performers, artists and musicians with workshops for all ages. In 2009 they found their current home between San Giovanni and the Caracalla bath ruins and called themselves Angelomai ‘Altrove’ (Elsewhere). A vastly diverse venue has resulted, a corrugated steel factory-like building with some of the most avant-garde and unique concerts and events in Rome for affordable prices, from David Lynch inspired video concerts and dubstep infused reggae to an Afro-classic orchestra. In the summer months a garden path littered with candles behind the main building leads you past a living room style bar with real fire to a park area turned open air dance floor and bar. In 2011 they founded the Wish Republic, a community aid company where no boundaries exist, celebrated through music where their diversity and artistically progressive philosophy is shown in its full light. 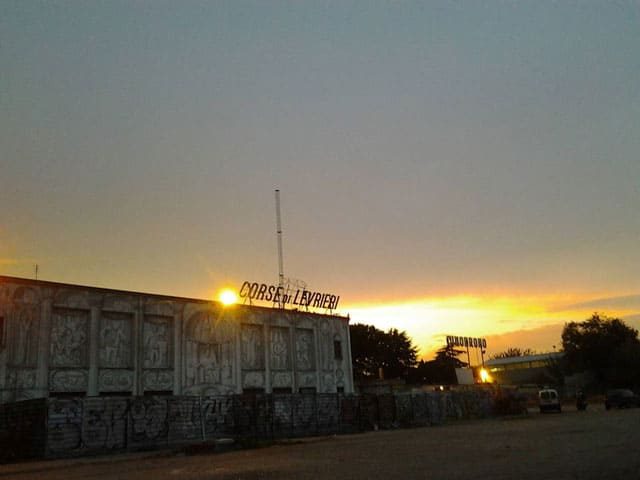 They call themselves a community for an insecure metropolis, taking the attack on protestors by police at the G8 summit in Genoa (2001) as a watershed event. The creation of Acrobax in 2002, an occupied ex dog race track (in Italian ‘cinodromo’) has inspired a great wave of participation and a free flow of contrasting ideas, keeping the public informed about acts of repression and neo-fascism with events aimed at educating people about these atrocities and at the same time remaining creatively exploratory. While remembering past events they have created a new platform; ‘income for all, no war’ regardless of your background. They have created a front to fight against small privatisation and a lack of opportunity for workers that reaches into the very fabric of our modern society. Acrobax’s multi-faceted, culturally aware complex includes; live concerts and DJ club nights in their huge open plan dance hall, workshops and talks, a rehearsal area for alternative bands, recreational activities (basketball, volleyball, football and more) skateboard park and a traditional trattoria (pizzeria every Wed 8pm-12am and bio-trattoria every Fri 8pm-12am). Hidden from the main street in San Paolo at the back of a car park, a massive satirical mural complete with 3d columns and arches by infamous clandestine graffiti artist Blu adorns the façade and leads you to the fun. After Acrobax, nightlife in Rome will never seem the same. 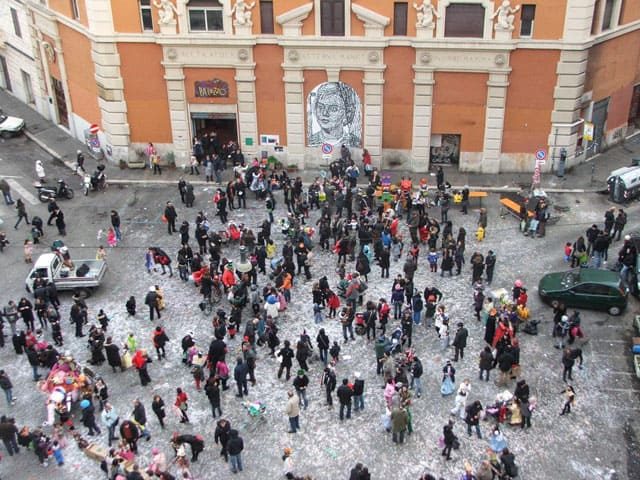 What is legal is not always right. So claim the organisers of Nuovo Cinema Palazzo, spurred into being as a revolt against an allegedly illegal opening of a casino in the studenty area of San Lorenzo, close to Termini station. This resulted in a ‘place where all is possible’, an active guardian figure over the occupied premises to curtail gambling and alleged Mafia infiltration, seen as a front as a way to ‘clean up dirty money’ from illegal practises. Dozens of artists, technicians and workers in the cultural sector have returned the space to its original function: that of a cinema and a theatre with a strong interdisciplinary vocation. Shows, concerts, film screenings, rehearsals, workshops for children and adolescents, readings, debates and seminars created in cooperation with universities and other cultural institutions have given rise to a social and artistic centre that has improved the quality of life in the neighbourhood and in the city. Nuovo Cinema Palazzo opened on 15th April 2011 and named their main cinema space after Vittorio Arrigoni, an Italian writer and pacifist killed by a Palestinian terrorist faction in Gaza on the same date. Ten months after occupation the civil court recognised their claim that Piazza dei Sanniti where they are based is an historic landmark and so has special legal protection prohibiting gambling houses, echoed in their much loved motto: CasiNO! 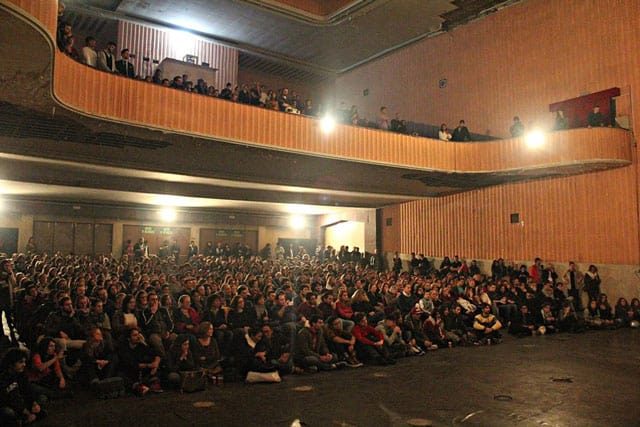 At the end of 2012 a concerned local group took over this run down cinema in Trastevere after a real estate developer wanted to turn the cinema a three-story parking lot. I’m happy to see the hip and trendy youth moving back into this gorgeous but often over packed and touristy area. The occupiers have become avid conservationists and want to convince the municipal authorities of the architectural and cultural importance of this cinema. I have to hand it to them, these guys are organised. Their website and events calendar is slick and instantly intriguing, with screenings of indie cult favourites like Stanley Kubrick’s 2001: A Space Odyssey or Machete by Rodriguez, original gigs like slap happy funk or a guitar and cello duet, progressive DJ sets, lectures, workshops and public assemblies. They strive to be open to all visitors, supported by the locals, Italian directors and actors and Rome’s architectural community. The audacious retro-tastic sign out front leads you in to the deluxe spacious 50’s theatre with gigantic screen and ample seating, making you feel like you’re back in the classic era of cinema. 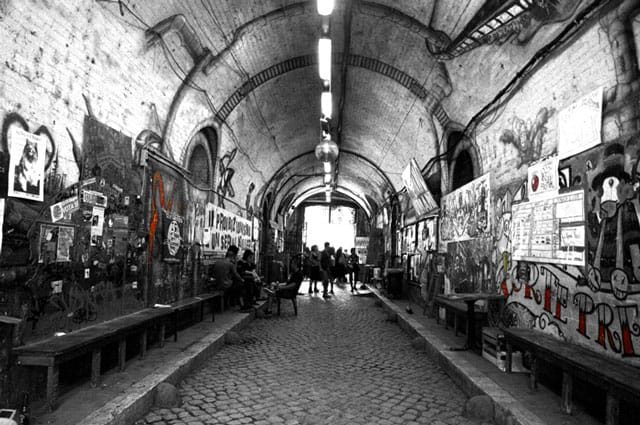 Within an ex-military fort including numerous rooms, outdoor spaces and former stables, edgy Forte Prenestino is one of the more unusual and special social centres in the city using their extensive grounds for concerts, film festivals, shows, DJ sets and exhibitions. It is a place to socialize with an exchange of ideas, energy, and vision that is strongly anti-fascist, anti-racist and anti-prohibitionist, a free association of individuals united by shared planning and common ethics. The complex was left to decay but was occupied and remade into an underground lover’s paradise. Forte Prenestino has been independent and self-managed since 1986, a maze of connecting tunnels clad with graffiti lead to the multidisciplinary spaces that include; a cinema, pub ‘12detutto’ with live gigs of rock, metal, rap, reggae and dance, a drama theatre, a permanent exhibition area, a tattoo and piercing studio, a tea room with treats, drinks menu, video projections and DJ sets (Wed-Fri 7pm-1am, Sat and Sun 5pm-12am), children’s entertainment by artistic company Tuttisuperterra and bio food market TerraTerra with direct relationship between producers and consumers where the consumer is seen as an involved co-producer (every first and third Sunday of the month). Waiting for legal permission that will never arrive, Forte Prenestino believe it’s best to stay on the frontier of society. Those who get too comfortable in life fall asleep, and here they prefer to keep their eyes open.