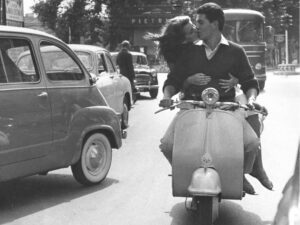 “Where does this myth come from?!” she shrieks, wheeling her bicycle down the cobblestone lane as I walk beside her. “Latin lovers indeed! Ugh!

Maybe they were at the time of the Roman Empire but not in 2011!”

I hope this doesn’t ruin your Roman holiday. I hope you haven’t just spent hundreds of euro on a Christmas present for an Italian in the naive but Hollywood-induced hope they are going to give you the most appassionato Natale of your vita. That is to say… it’s not impossibile but let’s start the new year with some candour: the fact is, if we generalise (and we must because it’s more fun this way), foreign men say Roman women are high maintenance and acerbic, while foreign women (who are, on the whole, more vocal about their anthropological findings) report that Roman guys cheat, play games, don’t make an effort or turn out to be disappointing in the bedroom.

It must be added, however, that these same ex pats are madly in love with the city of Rome and rarely speak of that affair waning or leaving one unsated. But if you are after a more tactile amore in the eternal city, my Christmas present to you this issue is a brief guide to dating in Rome; first the bad news, then the good.

For any female reader, don’t ever believe their ‘status’. There is always someone waiting somewhere, whether it’s the wife, the jealous (and justified) girlfriend, the lover in Florence or Milan, or the high school sweetheart in their hometown in Puglia or Sicily.

A friend of mine had a wonderful relationship with a lovely young Roman. After about a month he confessed he had just recently ended a long relationship. After three months he said, “Actually, we’re still together but I want to leave her”. After she’d given him her heart, he finally added, “Actually, we’re married.”

At an aperitivo recently, two foreign girls met for the first time and casually recounted their weekend by the sea with an Italian. They soon discovered, not only was he seeing them both but he was also sending them identical text messages.

And increasingly I seem to be hearing comments such as “I didn’t think I’d come to Italy and have to tactfully teach someone how to kiss!” Or “I’m so sick of guys taking me to exactly the same romantic spots in Rome and having to pretend it’s my first time! I’ve seen the damn keyhole – basta!”

Meanwhile, romantic and frustrated foreign males have turned to me in exasperation declaring, “They won’t even chat to you at a bar, they stand there tight-lipped, looking you up and down and not even cracking a fake smile to be courteous. Why are Roman girls so angry/suspicious/sad?” Allora, are you depressed yet? Don’t be. There’s still hope. When I first came to Rome I met a very savvy American woman. She’s still waiting for her Italian partner of many years to propose but they have a young son together and seem very happy. I remember the first time I asked her for advice on Italians we were hiding in the Hotel de Russie courtyard and she sipped her Prosecco and concluded dreamily, “They can break your heart and lie and flirt and make you long for the simplicity of men back home. But then, just when you’ve lost all hope, Italians will say one line, one compliment, send you one text message and it’s the most beautiful thing you’ve ever received and you remember why you adore them.”

My closest Italian female friends are anything but pesante. And the men here aren’t all cheating mamma’s boys. I’ve spent this entire year with an Italian who spoils me, is honest, isn’t married, jealous or possessive, and takes me down south to his pasta-making mamma and his sweet papa’, who, incidentally, shares all the housework equally with his wife. He brings me breakfast in bed almost every morning; he lets me go to dinner alone with other males then gives me a lift on his Vespa afterwards to make sure I get home safe; and he takes me to a different town in Italy almost every weekend. Of course, I can become invisible when his soccer team is playing and we’ve had enough fights in Italian to render my use of the imperative almost flawless. But hearing ‘ti amo’ for the first time from someone who means it, is like nothing you’ve ever experienced.

And I hear there are others out there like him; lurking in alleyways of Campo Marzio, gliding by on vintage bicycles in Monti and just waiting to fall deeply in amore with a foreigner like you.

Want to read about real life dating in the Eternal City? You can find my ramblings on this subject in How to Flirt and Compliment in Italian and in 7 Deadly Dates or in What to Cook an Italian Lover.