After the hell of a weekend at work, I finally had the time to relax and spend a couple of days with my Macedonian friend Elena who was in town for a long weekend. I was feeling guilty for ignoring her during her first days in Rome and I really wanted to make it up to her with an underground tour of the city, as she already had plenty of time during the previous days to visit the touristic part by herself. It wasn’t a marathon, though, thus the first day started slowly with a tasty brunch at my place, followed by a coffee with my mother at Dagnino, the Sicilian bar under Piazza della Repubblica elegant Porch. 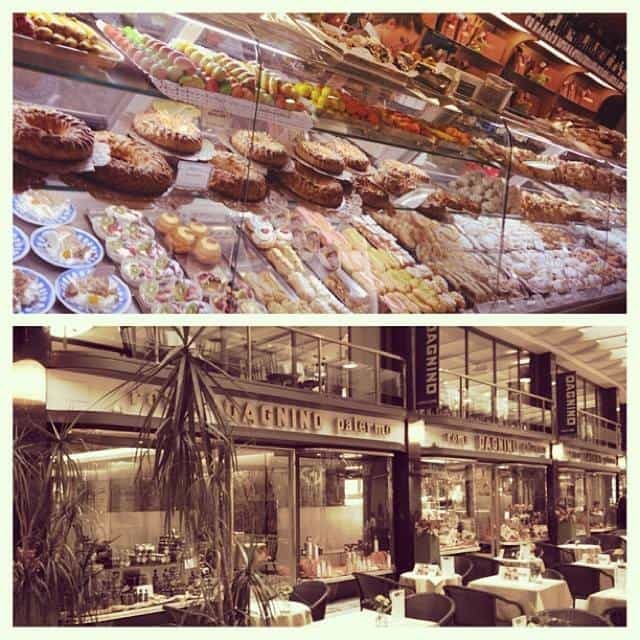 From here we walked towards San Lorenzo, which I figured it out being the proper point of departure of any underground tour of the capital, since all Romans in their teens, all undergraduates coming here studying from all over Italy and all Erasmus students coyly start discover the other side of Rome from this neighbourhood.

San Lorenzo is the neighbourhood where a certain kind of counterculture first appeared, the neighbourhood of the first independent radio (Radio Onda Rossa) which is still the voice of many people somehow linked to this district (from students to immigrants, from musicians to independent artists, together with many different political groups) and no matters how many left-anarchist-squat-alternative places, unconventional shops or groundbreaking art galleries are now active in town, you will always come back to San Lorenzo now and then attracted by its decaying and spree charm (partially founded on its political and countercultural scene, which is still proudly alive). 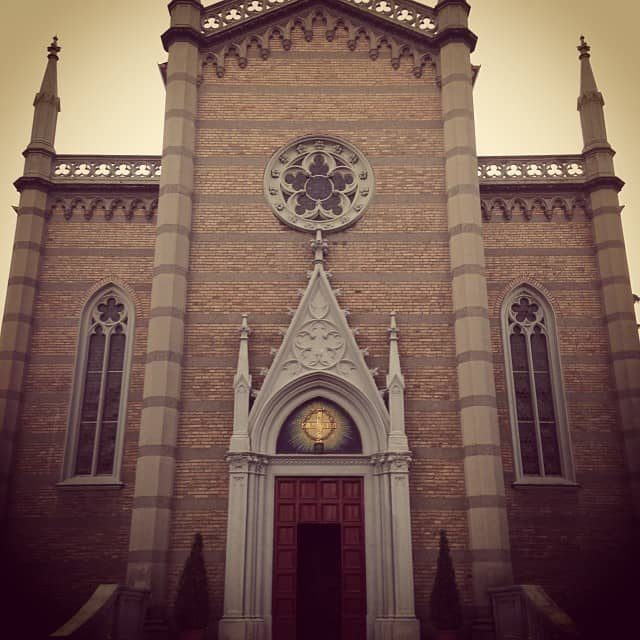 According to your degree of “underground-ness” you can start your exploring tour picking a place out of a range which goes from Bar dei Belli (a.k.a. the official meeting point when you are going out in San Lorenzo) and Marani (a bar with a very romantic ivy-covered cloister where you can hide from the chaos of the neighbourhood) to Dread Lion Pub (where you can often find a ska-reggae dancehall warming up the night) and the 32 (for the most politicized and the no-frills cuisine lovers). Those places are San Lorenzo’s reliable anchorages and you go there to enjoy from the fact that they never changed (and never will); but San Lorenzo is also a neighbourhood to re-discover, ‘cause you will always find, close to your certainties, a new interesting place to unearth. And that was exactly my goal!

We started with a walk through Villa Mercede park, up to the public library and back. I’ve been always fascinated by public libraries; wherever I moved, I got my library card during the very first days, as I definitely can feel more connected to a town and its community while hanging a book that passed through many hands before mines. And this library will be always one of my favourites, ‘cause it has a beautiful park around and it is always crowded by interesting young people. 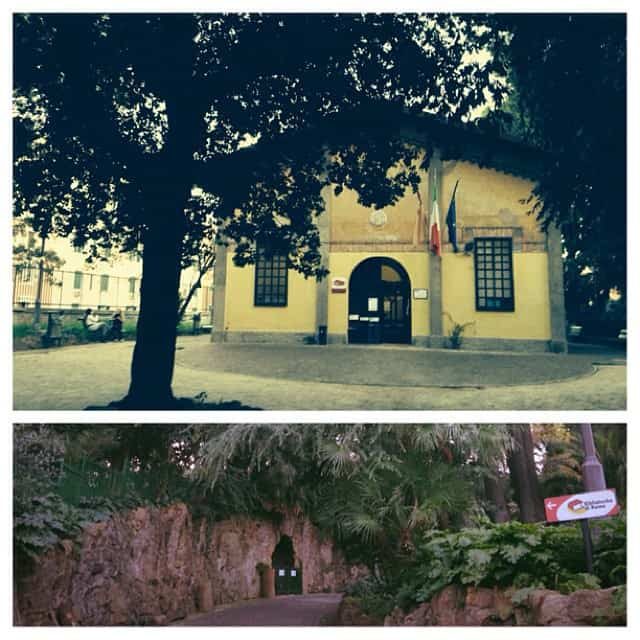 Going out from the park, we proceeded along via Tiburtina until the alley of the ancient chocolate factory Said where I was planning to have a hot chocolate and buy some pralines for a very special present. Unfortunately it was closed, so after ten minutes spent admiring the elegant and so vintage furniture inside the old warehouse now transformed into a chic chocolate shop and longing for chocolates with the nose stuck on its window, we moved forward and reached the core of the neighbourhood: via dei Volsci and the new square (I call it new square as I am old enough to remember when the most crowded meeting point was still the adjacent market square). 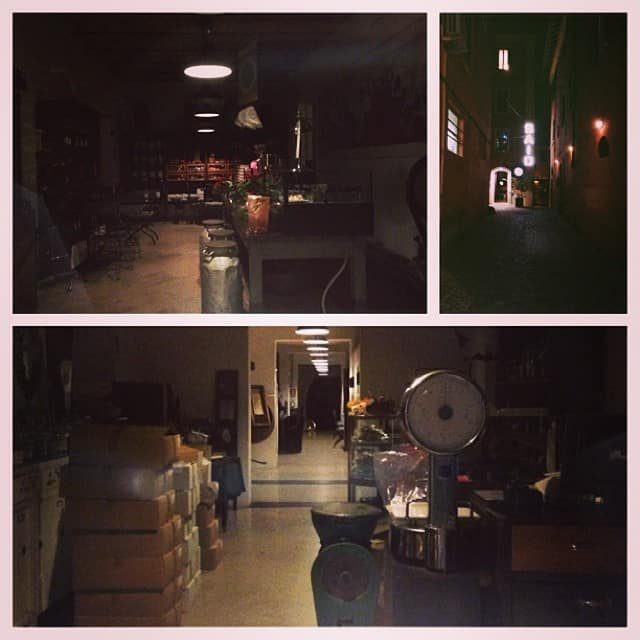 Few meters from the new square, there is a nice and colourful bookshop / tea room called Giufà, specialized in comics and graphic novels but selling many other kinds of independent books. Here I finally found the very special present I was looking for and, after another friend stopped by, the three of us sat down to drink a cup of spicy green tea.

From here, we went down along via dei Sabelli and admire the whole “Graffiti Convention” area [www.romeing.it/the-graffside-of-rome-san-lorenzo] and even if it was too dark to properly enjoy it my friend was amazed.

As we had a table booked at the Pastificio San Lorenzo but we were still waiting for another friend to join us, we went visiting the Fondazione Pastificio Cerere, which is in the same building of the restaurant as they are both part of the same renovation project of this old pasta factory (as a token of San Lorenzo industrial past). The factory was built in the first decade of the 20th century and then abandoned in the 1960s. Through the years it has been converted into artist’s studios, art galleries, photography schools and graphic studios; it organizes educational projects and residences for young artists and curators, as well as a rich program of shows, conferences, workshops and studio visits. The exhibition running now is nothing extraordinary, but the Fondazione Pastificio Cerere is always worth a visit for its yard, the most beautiful outcome of the reuse and renovation of this industrial building (I’ve never been inside the lofts upstairs, though…). 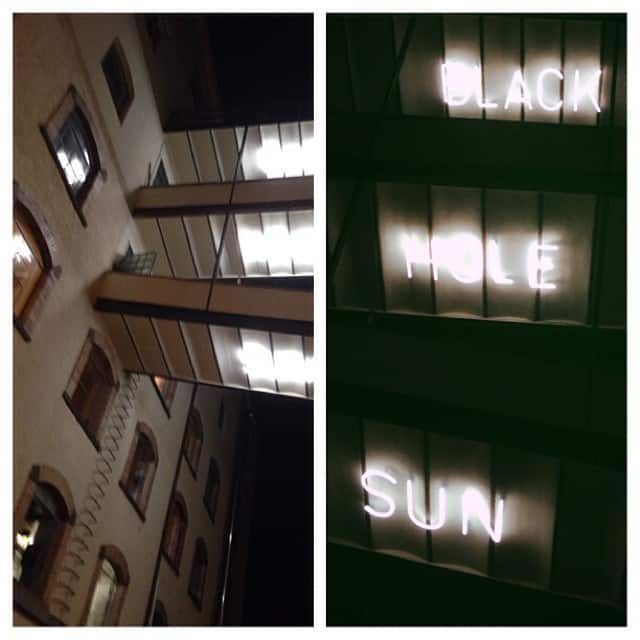 Finally it was dinner time! I was waiting for this moment since I tried their cappuccino of potatoes, egg and mushrooms at the “This is Food” festival and I was very excited ‘cause the Pastificio San Lorenzo menu is very promising. My friends all ordered pasta (assuming by the name of the restaurant that it was their specialty), while I went for a couple of fish appetizers: a tartare from the sea and a codfish, red pepper and coffee sandwich. While waiting, they gave us a taste of couscous with almonds (the welcome of the Chef) and, after we were waiting no more than ten minutes, three portions of anchovies en croute de pain and wild fennel to apologize for the delay (so kind!). No need to say, the dinner was delicious and the waitress was so lovely with us we wanted to lie on those couches sipping Malvasia wine forever. 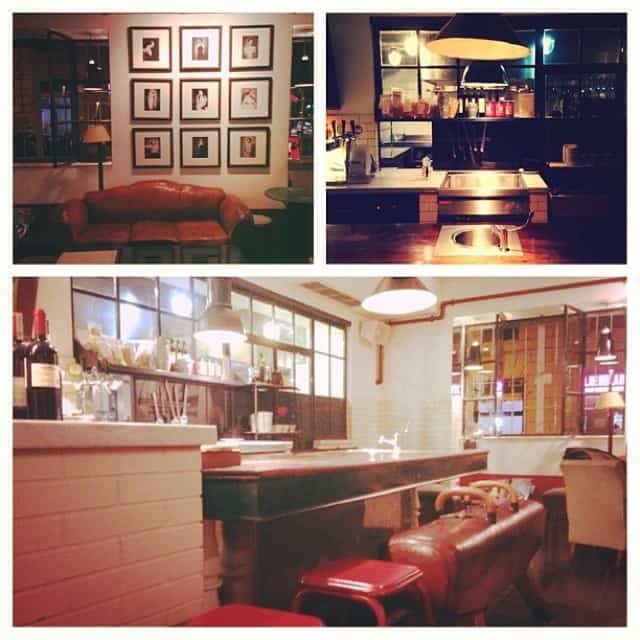 After that, we started feeling tired, too tired to hang out drinking and dancing in some of the most historical underground venues in Rome, so we head to the Nuovo Cinema Palazzo, the place that the real estate speculation wanted to transform into a casino, but that is still a cinema and a very active cultural centre thanks to the effort and the energy of many artists believing in its countercultural active role, first among everyone the actress Sabina Guzzanti. Unfortunately the documentary movie of the night was in Italian language and my Macedonian friend is still at the “Io mi chiamo Elena” stage, so we skipped the movie and resigned ourselves to call it a day. But -without doubts- a very special one.