My passion for cinema and adventure recently led me to discover the first amusement park devoted to the art of cinema in Italy, Cinecittà World. Famous Italians such as Oscar-winning set designer Dante Feretti, as well as the award-winning composer Ennio Morricone, were among those involved in the creation of this new and unique theme park.

The park’s entrance itself is a tribute to the silent film Cabiria, one of the first major blockbusters filmed in Italy, shot in 1914 and featuring John Pastrone and Gabrile D’Anunzio. The entrance designed by Dante Ferretti is a giant portal in the form of the monstrous god Moloch’s mouth. Once past the massive portal, the main street of Cinecittà world brings you back to the 1920’s in New York City, an era iconicized by prohibition, gangster and swing dance. If you want to try a new look, the Barber shop in the park provides clients the opportunity to transform their hair or beard into styles from the early 20th century. On the same street and in the same 1920’s era you can find the “Charleston Club” a pizzeria with a la carte menu options from the Waldorf Astoria in New York City. (I recommend eating at the end of the visit if you want to try all the rides at the park.) 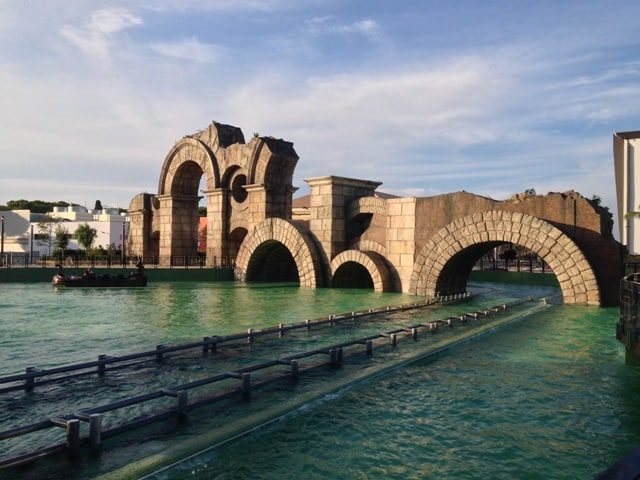 I began my visit with the fantastic water ride dedicated to ancient Rome and modeled after a large Roman building of the first century. The ride is blend of both a classic rollercoaster and a thrilling water park experience. “Altair” a spaceship that looks like it just touched down on planet Earth transports you to space and lets you experience 360 degrees of ‘interstellar travel’ .

I continued my tour through “Ennio’s Creek”, a western village that is set to the music of Ennio Morricone. The most spectacular set of the park “Erawan” is next, a unique set where the adventure films of the fifties are immortalized by the elephant god Erawan. The statue is surrounded by tropical plants and features a jungle soundtrack. At the back of the magnificent elephant is a “Drop Tower”, where I tried the free fall adventure, a pure adrenaline experience. The “Sognolabio” area, specifically designed for children, offers family friendly amusements with the “Spuzzaincubi” floating ships and water guns game and the “Macimescolo” pedal ride.

The center of the park is dedicated to Dino De Laurentis, the founder of the studio and boasts a real submarine ‘Eagle IV’. There are also large theaters that have reproduced Fellini’s and Rossellini’s studios from the historical headquarters of Cinecittà in Via Tuscolana. The most striking attraction is Theatre 2, with an atmosphere inspired by the black and white Thriller and Horror genres. A fantastic backdrop of Dante’s inferno illustrated by Dorè, sets the tone as you continue your journey to the “Free Fall” ride: a trip to the last circle of Hell.
With more than twenty games and several restaurants along the picnic area, Cinecittà World has become the new address to experience a journey through the eternal city of Rome and it’s cinematic masterpieces.
Both Cinecitta Studios on Via Tuscolana and Cinecittà World of Castel Romano provide new perspectives on the history of the eternal city, the world of the cinema and the wonders that film sets can create.