This exhibition is being jointly produced by the Azienda Speciale Palaexpo with the Städel Museum in Frankfurt, the Moderna Museet in Stockholm and the Guggenheim Museum Bilbao.

Soldiers, Shepherds, Rebels, Partisans, Painters, Modern Painters, Reds and White are the Heroes and New Types painted by Georg Baselitz between 1965 and 1966 in total solitude, while immersed in a fully-fledged furore of expression. For the first time a major monographic exhibition brings together a conspicuous number of these paintings, which are considered to be a kind manifesto of Baselitz’s painting and to mark a milestone in the history of contemporary art. 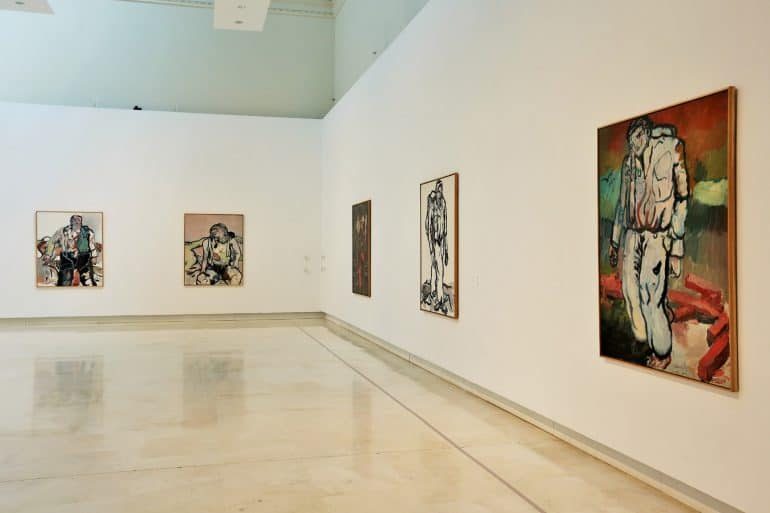 Raised in the German Democratic Republic but moving to the German Federal Republic before the construction of the Berlin Wall, the artist worked on this cycle at the age of twenty-seven on his return from Florence, where he had spent six months on a study grant. Painted with vigorous brushwork in which colour, line and figure achieve a strength and intensity that sees them almost vying with each other, the pictures portray a totally new kind of hero.
Doffing the positive image associated with the rhetoric of war and postwar propaganda, Baselitz’s Heroes display fragility, precariousness and inconsistency. Giants in tattered uniforms, they stand out starkly, wounded and vulnerable, against a backdrop of rubble. Yet this feeling of despair is attenuated by the image of an ointment, by the presence of an implement such as an artist’s palette, or by the gesture of picking up a small cart or a shred of countryside as though to protect the seeds of some future crop.
A tragic failure and a sign of hope: precious ambiguity expressed by a young man born in Germany before the collapse of Nazism and who went on to witness his country being split into two halves at each others’ throat, yet unable to find a valid model for society in either.
In addition to showcasing almost the entire cycle of Heroes or New Types, the exhibition also hosts a selection of drawings and woodcuts on the same theme, together with the earliest examples of Baselitz’s so-called “fractured” paintings of 1966 in which the artist experimented with reorganising the image that preceded the season of upturned paintings.
And lastly, tracing an ideal path of continuity between past and present, the exhibition winds up with a selection of paintings from the Remixcycle on which Georg Baselitz began to work in 2005 and which herald the series of Heroes and New Types dating from 2007 and 2008.
The exhibition is devised by the Städel Museum in Frankfurt and is produced in conjunction with the Palazzo delle Esposizioni in Rome, the Moderna Museet in Stockholm and the Museo Guggenheim Bilbao. The richly illustrated catalogue with new, state-of-the-art interpretations is available in Italian, English and German.