Jim Dine’s exhibition at Palazzo delle Esposizioni is the most comprehensive retrospective of his work shown in Italy yet. The exhibition, simply titled ‘Jim Dine’, showcases the artist’s works from 1959 to 2018. There are few artists who maintain a humorous, light-hearted spirit over a 60-year career, which makes this retrospective a delight. Dine described this exhibition as an autobiography of his life: “a great life”, filled with “a lot” of laughter. Don’t be afraid to crack a smile – this is art to have fun viewing. Kids are sure to enjoy this sun-soaked artwork as much as, if not more than, the grown-ups.

Dine had an extraordinary artistic career, beginning in the early 1960s when he was still in his 20s. He developed his craft within the dynamic artistic milieu of 1960s’ New York, where he was friendly with art-world movers and shakers like Jasper Johns and Robert Rauschenberg. At the tender age of 29, Dine was among artists selected to represent the United States in the 1964 Venice Biennale. That year, an American artist won the Golden Lion, and European critics worried this marked the end of Europe as the world’s preeminent cultural powerhouse. Fifty-six years later, with this exhibition in a Roman museum (itself a collaboration between an Italian curator, Paris’ Centre Pompidou and an American artist), one might suggest that America’s artistic achievements only enrich European culture. 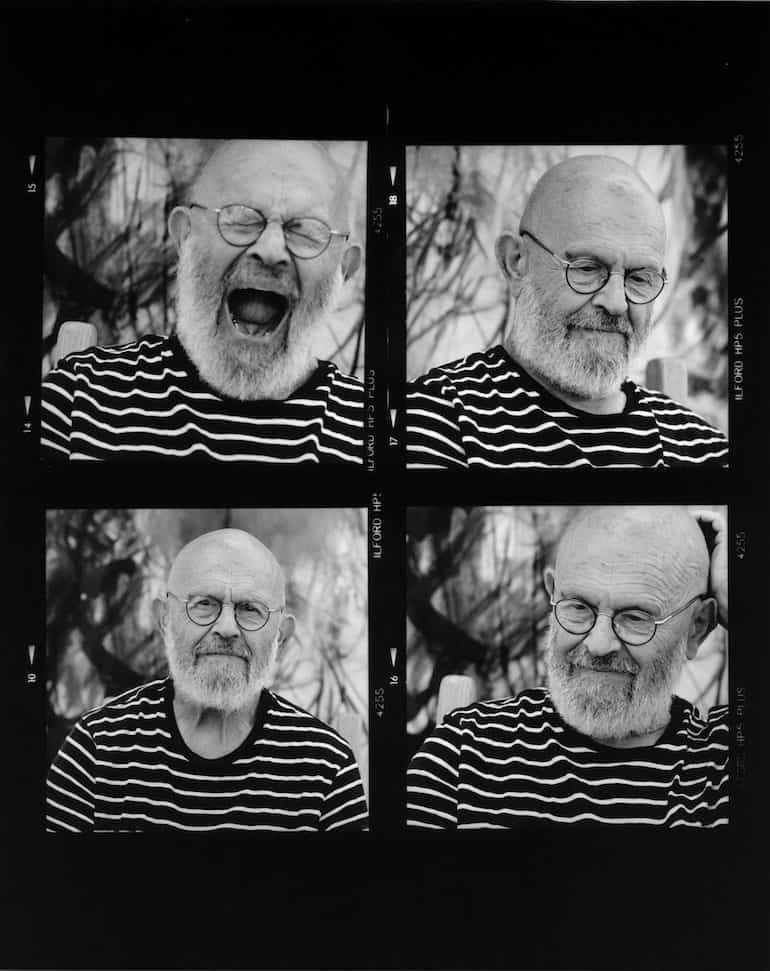 Room 1 opens with a timeline of Dine’s artistic career, spanning 60 fruitful years. The most exhilarating segments of his autobiography detail life as a young artist in New York’s rich art scene; once success was assured, a consistent upward career trajectory makes less gripping reading. Photos from Dine’s ‘Happenings’ performance pieces play on TVs opposite the timeline. Make sure you listen to the headphones beside them, even if only briefly; hearing Dine’s wacky stories from his early performances makes clear how a comedic impulse has informed his whole career. Dine’s early Head paintings lend a sombre note to this section of the exhibition. The Head paintings, made in 1959, when Dine was just 24 years old, show a young artist of great skill attempting to find his own style.

By 1961, Dine had his style secured; from this point onwards, his work possesses the humorous perspective he’ll remain remarkably faithful to for the rest of his career. Rooms 2 & 3 showcase Dine’s paintings from the early 1960s. Many of the paintings in these room incorporate domestic objects in charming ways. The Studio (Landscape Painting), 1963, sees a shelf mounted to the bottom of a rainbow, but you won’t find a pot of gold here; just empty glasses, mugs and espresso cups, filled with paint. Find yourself reflected in the mirror of Dine’s White Bathroom, 1962, alongside towels on a towel rail, toilet roll and a hook that, we’re told, is for a washcloth. Make sure to look behind the mirror, inside the bathroom cabinet mounted on the canvas, for a glimpse of more toilet roll, ready and waiting for the visitor to ‘the bathroom’ who needs it. Black Shovel, also from 1962, sees Dine take a turn toward darker humour. A painted shovel is mounted on a canvas, also painted black, but the tip of the blade is just digging into earth, stored in a window box below. There’s a joke here somewhere about artists ‘digging their own grave’. Considering these pieces were produced while Dine was in his mid-to-late 20s, they demonstrate Dine’s remarkable self-confidence in his own ability to innovate.

Room 4 showcases more pieces of Dine’s from the 1960s alongside works from the early 1970s. Astute visitors will spot reoccurring motifs from these decades; expect to see household tools, bits of clothing and rainbows repeating like obsessions in various sculptures and paintings. 1965’s Another Ribbon Machine finds rainbow ribbons framing a piece of industrial aluminium, like the drapes of a circus tent surround the ring. The complete effect is delightful, and humour is generated from these odd objects – which should grate against each other – coalescing so charmingly. Although Dine has often been lumped in with the Pop Art movement, his works don’t really correspond with those of Warhol or Lichtenstein. Dine seems to read more as an American descendant of the European avant-garde; shoes below paintings and air-ducts springing from landscapes have a Dadaist playfulness to them.

Room 5 demonstrates Dine’s consistency in output from the 1970s until the present day. Here, visitors will first see the use of the heart motif which gains dominance throughout his later work, alongside colossal sculptures of household objects. The repetitious use of hearts, as simple as those girls draw on notebooks for their crushes, make evident Dine’s commitment to a loving optimism. Only Room 6 disturbs the light-hearted tone: this small selection of darker works, made from the 1980s until now, indicate an artist who occasionally wrestles with his mortality.

The exhibition’s finale is truly grand: Room 7 and 8 stretch across an expansive hall to showcase Dine’s largest and brightest sculptural pieces. The long corridor of Room 7 is lined with heart motif paintings and punctuated by the most rainbow-drenched of all Dine’s sculptures. As exhilarating Room 7 is – and it really is, full of giant paintings of red hearts, and fluorescent paint-soaked tools, hanging from colossal structures – a cynical eye might read the crowded curation as better for Instagram than for art lovers. Expanding at the corridor’s close is Room 8, where Dine’s Pinocchio sculptures of the previous two decades gather below his poetry. Dine’s poetry delineates his own commitment to retaining a youthful open-heartedness, even while facing old age.

If you’ve been waiting for a reminder that art can be fun (and funny!) go and see Jim Dine’s exhibition at Palazzo delle Esposizioni. Adults will appreciate the irony and kids will enjoy the novelty. Keep your eyes peeled for events which correspond with the exhibition; Jim Dine is reading his poetry on 18th March and there’s a performance of John Cage’s Sonatas and Interludes for Pianoforte on 27th March, among others.