There’s a new addition to the industrial complex below street level of the former Biondi Mills in Ostiense… The latest project of legendary Alessandro Procoli of The Jerry Thomas Project and Paolo Bertani and Leonardo Di Vincenzo (formally of Open Baladin and L’Osteria Birra del Borgo) is Latta.

The new partners all started around the same time about 10 years ago and have been redefining the drinking culture and landscape in Rome ever since. Open Baladin – the 1st craft been bar in Rome (with 50 on tap) was surprisingly well-received by an audience who knew very little otherwise, as the world of craft beer in Italy at that time was relatively unknown. Which was also the case (but for cocktails) with the opening of The Jerry Thomas Project – the first speakeasy in Italy.

With diverse backgrounds – Procoli’s expertise is cocktails where Bertani and Di Vincenzo’s area of concentration is craft beer – their parallel paths finally came together. And with Latta, they have joined forces to create yet another revolutionary concept in Rome.

Inspired by the 1950’s American soda companies and taking into account the two biggest trends in the beverage world right now (natural, low abv beverages) Latta was born. The concept is totally original but simple. The Roman word for can, Latta proves that you shouldn’t judge a book by its cover (or in this case, container). Making high quality drinks and food easily accessible and affordable in a casual, cool setting, Latta reinvents the wheel and breaks those stigmas surrounding canned beverages–which until now have always been associated with low-quality contents. 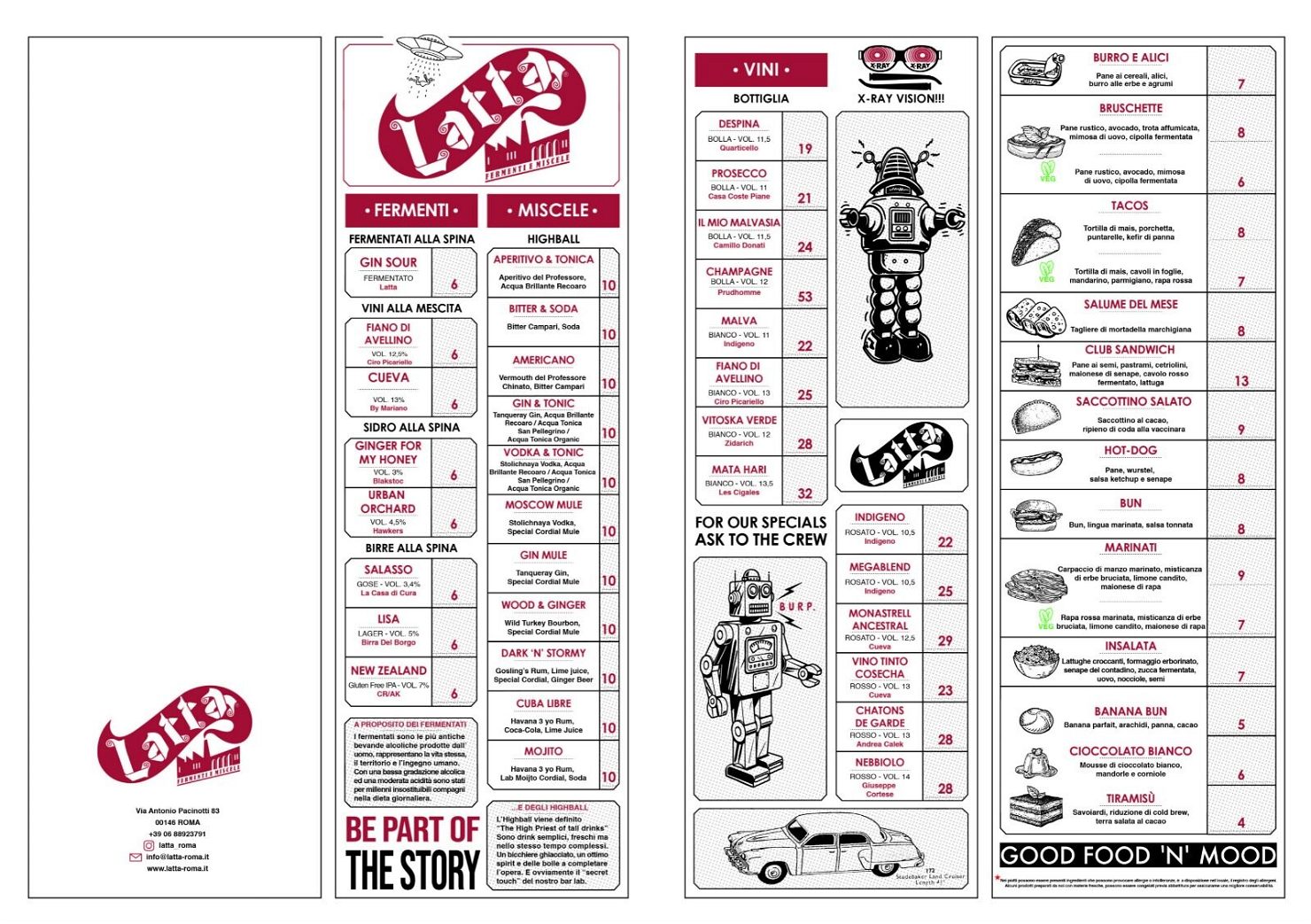 Latta’s mission is to create provocation, showing people that there are still new and different ways to make things that already exist. On the drink list are beers and ciders on tap, natural wines (including an interesting selection of bottles from La Cattiva, Paolo and Leonardo’s very own vineyard in Puglia), highball drinks and a little something they call fermented cocktails (ferementati alla spina). Currently on the menu is the Gin Sour Fermentato – using ingredients and the fermentation process for beer to mimic the taste of gin. A drink that challenges people’s perceptions and senses.

The food menu, created by innovative chef Marco Moroni, is also something quite unique. Inspired by pub food, this is a modern street food version only with the highest quality ingredients and a Roman twist. From hotdogs and club sandwiches to tacos of porchetta, lingua (beef tongue) buns, and coda alla vaccinara, you can sample the most delicious, classic Roman dishes (also available to go).

In Latta, they have created a sort of comfort zone where people are safe to experiment. The interiors, designed by B15A, are minimal, industrial and beautiful featuring aluminum and metal elements throughout and boxes (inspired by the works of American artist Donald Judd) containing their live botanicals.

Although already open for business, there are two phases for Latta…maybe three. ‘Part One’ is the canning of cocktails, which is already in motion. ‘Part Two’ will be the opening of their “Fermentation Lab” where you can actually see them at work in the fermentation process (which Di Vincenzo actually has a PhD in). What’s in store for ‘Part Three’ of their project? Hopefully to one day create a small factory and go into distribution.

But all you need to know right now is that Latta is open from 18 – 2am every day of the week except Monday. And the kitchen closes at 1am so it’s great for a quality late-night snack. Their current soundtrack is indie rock and light electronic and there are three rooms (all with different vibes) seating about 100 inside with an additional 150 in their massive outdoor area – opening soon!