A photographic journey of the 1950s and 60s in Italy, told through over 250 pictures

“Can you imagine my face, when instead of a pair of skis I was looking for in my parents’ home I found these photos made by my father?” – shares Silvia Di Paolo, daughter of Paolo Di Paolo. “It took more than 20 years to convince him to show these photos to the world.”

Paolo Di Paolo was born in Larino, Southern Italy. He moved to Rome at an early age and soon became one of the greatest photographers who captured the country that was being re-forged from the ashes of the Second World War. In addition to being a photographer for “Il Mondo” magazine, where he published more than 500 photos, he also portrayed Hollywood stars and key personalities of Italian art, fashion and cinematography world “for pleasure”.

The exhibition itself is divided into different sections. The first section titled “Society/Rome” showcasing Italy, and in particular – Rome emerging from poverty and illiteracy of 50’s. In the second, “Society/World” section are presented beautiful shots made during Di Paolo’s trips to Japan, Iran, Russia and United States.

The photographer became known for his portraits of artists and intellectuals, which he arranged through personal connections. All of them are presented in the third “Artists/Intellectuals” section. There you can find rare photographs of film director Pier Paolo Pasolini visiting the Monte Testaccio in Rome, smiling Mimmo Rotella creating one of his décollages in Piazza del Popolo, Lucio Fontana at the Biennale, Giuseppe Ungaretti with a cat and actress Kim Novak ironing in her room at the Grand hotel.

Exceptional is the focus named “La Lunga Strada di Sabbia”, a reportage on the summer holidays of Italians during 1959, by the duo Paolo di Paolo and Pier Paolo Pasolini. The reportage was for the Italian magazine Successo, directed by Arturo Tofanelli. A journey through the summer holidays around the entire Italian peninsula, from Viareggio to Sicily. As you stare at these photographs, you’re taken back to the the end of the 1950s in Italy, you can already breathe the air of the 60s, the tide changing. One of the most iconic images is the one portraying Pasolini walking along Cinquale beach in Viareggio, observing youngsters swimming in the sea.

Also in the “Artists/Intellectuals” section you can find Italian artist Giorgio De Chirico together with Gina Lollobrigida, Salvatore Quasimodo with Anita Ekberg and many others. With each of them Paolo Di Paolo created strong relationships which made all his photos sincere and unique.

“Many of his photos remained unpublished because they were so intimate that it would have been inappropriate to give them to the newspapers” comments Silvia Di Paolo. “ Like those of Yves Montand in Rome”. Indeed, extremely beautiful captures of Simone Signoret and Yves Montand kissing at the Aventino caught the eye of the visitors.

Bartolomeo Pietromarchi, Director of MAXXI Arte, noticed, that “Di Paolo masterfully captures moods, characters of well-known and anonymous faces with vanity and truth”. Indeed, the most attractive and unexpected photo sequences, definitely, became the one of Marcello Mastroianni and Faye Dunaway expressing mutual tenderness. Paolo Di Paolo commented: “These are not photos of a scene from a film. They came out of the boredom of a grey afternoon during a break in the film “Lo Chalet”. Faye Dunaway was sleeping. I said to Marcello: wake her up with some caresses”. After, this man gently touched her face. The actress woke up surprised, in disbelief. And she returned him the caresses with unexpected sweetness. It is the sequence of the birth of a great passion”.

A particular group of pictures is dedicated to Italian actress Anna Magnani. “It was one of the special photoshoots I made. You can feel her strength through photos, can’t you? Luckily for me, I was the only photographer she allowed to photograph her with her son” – proudly comments the photographer. 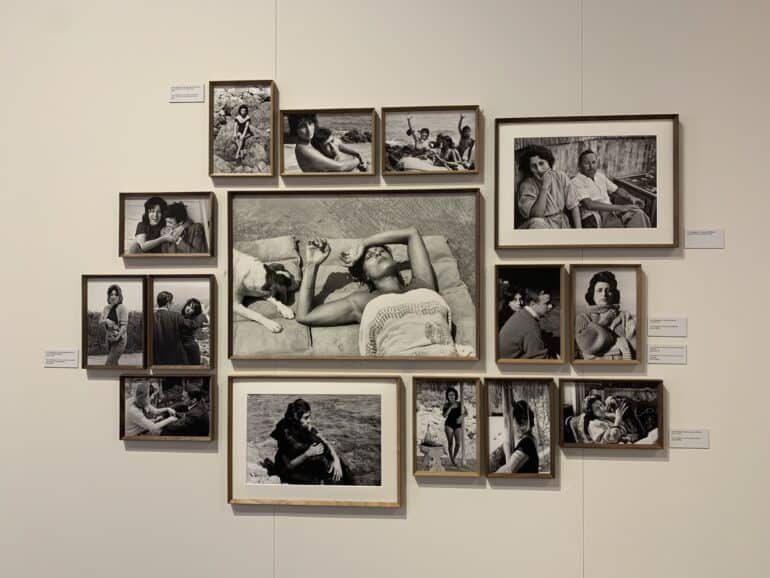 In “Mondo Perduto” of Paolo Di Paolo the visitor will get a chance to enjoy unpublished photos of Brigitte Bardot, Federico Fellini, Alfred Hitchcock and Grace Kelly, to name a few. Thanks to Alessandro Michele, creative director of Gucci, Bartolomeo Pietromarchi, Giovanna Melandri and curator of the exhibition – Giovanna Calvenzi over 250 of Di Paolo’s photographs will be exhibited in MAXXI museum of 21st Century Arts.

This team has done an amazing work worth visiting. The exhibition “Mondo Perduto” of Paolo Di Paolo is on air in MAXXI from April 18th until June 30th.