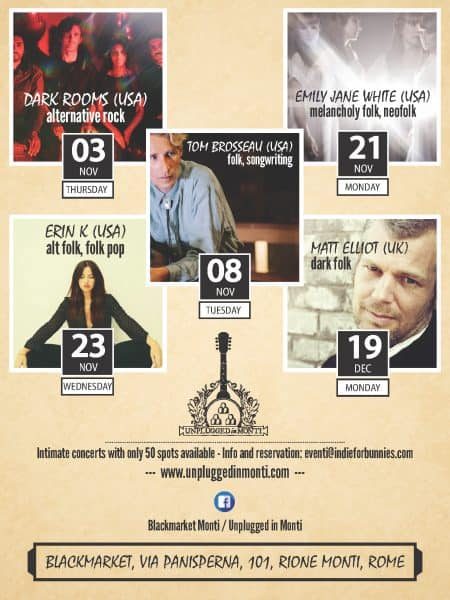 Music lovers and those who frequent the hip indie scene in Rome, will be glad to hear that Unplugged in Monti has a fresh line up of musical talent planned this November.

Dark Rooms will rock the stage on November 3, Tom Brosseau will grace the stage on the 8th, Emily Jane White on the 21st and Erin K will be the grand finale on the 23th. Tickets must be reserved in advance (see website for details.)

Daniel Hart is an innovative composer and visionary violinist. In the past few years, he has composed film scores and commercials, even toured with St. Vincent and Radiohead. But most recently he has created and lead his own band, the moody and ambient Dark Rooms. Hart isn’t overwhelmed by a loud ego, but he has a quiet confidence. With a strange magnetism, his live performances leave crowds with a haunted feeling.

Tom Brosseau is a folksinger and songwriter from North Dakota. He comes from a working family with a musical background. He is set to release his new album North Dakota Impressions, the 3rd record of a trilogy following on from Grass Punks (2014) and Perfect Abandon (2015). The trilogy visits life from a local perspective, taking the listener on a journey that doesn’t clip along uniformly on some common interstate, but treads at its own pace on a rural route. More glances, more investigations and introspections, more light, more dark. Memories, imaginings, longings for a place, a home. North Dakota Impressions is a hopeful album.

Emily Jane White is a musician, songwriter, and poet from Oakland, CA. She began performing under her own name in 2003 and released her first album “Dark Undercoat” in 2007, with “Victorian America”, “Ode to Sentience”, and “Blood/Lines” following. White has cultivated a dedicated audience in Europe and North America. “They Moved in Shadow All Together” (2016), Emily’s fifth album, was recorded at Tiny Telephone studio in San Francisco,CA, and New and Improved studio in Oakland, CA, between December 2013 and September 2015.

“Witty, humorous, and a breath of fresh air…It’s a great example that even though femail voices can be angelic, these women are real women; they feel emotions like love and lust like the rest of us and aren’t afraid to sing about them…” – Mary Chang, There Goes the Fear

“It reminds me of early Suzanne Vega vibe wise with more of the wit that Kirsty McColl used to bring to things – there is definitely some decent humour to be had…” 0 Steven Bained, Unsigned Band Review

The Order of Malta Keyhole