The Basilica of St. Clemente is an unparalleled experience here in Rome, especially if you are on the hunt for that unique site not everybody goes to. In spite of its close proximity to the Colosseum, the church of St. Clemente is little known to tourists. My personal reasons for recommending this as a must-see are countless, starting from the breathtaking byzantine mosaic in the upper abyss of the church, which features the cross symbolizing the tree of life, with twelve doves as the apostles of Christ. 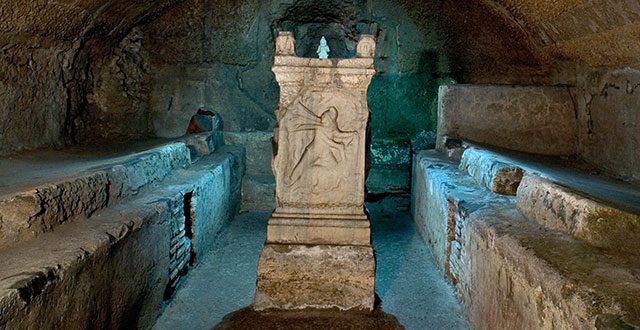 Be sure to visit the two lower levels; on the first you will find the fourth century Basilica, which was undiscovered until the late 18th century, after it had been covered with gravel around 1,100 after Christ. Then go down to the bottom level with its remains of an ancient roman house in brick from the first century after Christ and which was transformed into a Mithraeum between the second and third centuries.

Don’t forget, the first underground level also holds the tomb of St. Clement, the fourth Pope in history after St. Peter, St. Linus and St. Anacletus, and the tomb of St. Cyril, the founder of the Slavonic literature.

Admission to the excavations: €10

The Best Underground Sites of Rome