Fendi: the family-run atelier encapsulating the glamour and elegance of Rome

Since opening as a small shop for leather goods on Via del Plebiscito in the historic centre of Rome in 1925, Fendi has prevailed as an internationally renowned fashion house, encapsulating the glamour and elegance of the Eternal City. Championed by Alda Fendi, one of the five daughters to take over the family-run atlier in 1946, the brand has grown a reputation beyond high fashion, establishing a presence in art, architecture and luxury hospitality. Nowhere is Fendi’s expansion more evident than in the Italian capital. From the Fendi headquarters in the rationalised neoclassicism of the Square Colosseum, to Zuma, the rooftop bar and restaurant of Palazzo Fendi, to Alda Fendi’s most recent commission, the modern masterpiece by Jean Nouvel, Palazzo Rhinoceros.

The Palazzo della Civiltà Italiana, also known as Colosseo Quadrato (Square Colosseum), was built in 1937 to host the Mostra della Civiltà Romana during the 1942 World Fair. In 2015, Fendi moved into the dazzling geometry of this iconic Fascist building, housing five floors of offices in six rows of loggias, with the ground floor reserved for Fendi’s permeant art collection and rotating exhibitions. This gallery space, which is free to the public, shows work of internationally renowned Modern and Contemporary artists, including the Italian Arte Povera artist, Giuseppe Penone.

Alda Fendi has commissioned a number of works by Giuseppe Penone, two of which can be seen at Fendi HQ and a third, Foglie di Pietra (Leaves of Stone) can be found at Largo Goldoni, in front of Palazzo Fendi. This work was gifted by Alda to the capital city, a donation which represents her passion for philanthropy projects and artistic investments. Over the last few years Fendi has restored several of Rome’s fountains, notably the Trevi Fountain, and was the main sponsor of the Italian pavilion at the 2017 Venice Biennale.

The magnificent Palazzo Fendi stands at the intersection of Via del Corso and Via dei Condotti, a central position which is emblematic of Fendi’s unprecedented presence in Rome’s luxury shopping streets. The interior of the flagship boutique is a feast for the eyes: opulent glass and marble staircases are juxtaposed by installations and artworks by emerging artists. The second and third floors house exclusive suites reserved for guests of the Fendi hotel. However, the fourth floor is open to the public and is truly a hidden gem. Zuma is an exquisite high-end Japanese restaurant and bar, with spectacular views of the Spanish Steps and Villa Medici. It is well worth a visit – even just for a cocktail! 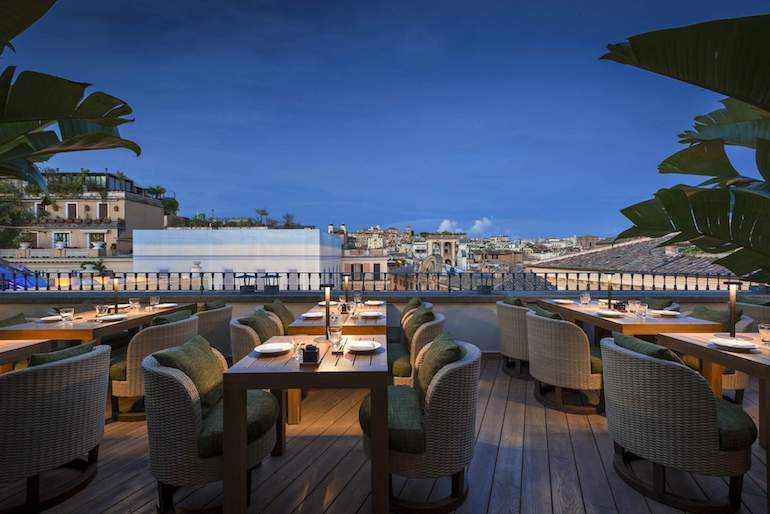 In 2001, Alda Fendi established Fondazione Alda Fendi – Esperimenti, a non-profit arts foundation, which stages exhibitions and performances by internationally renowned artists, actors and musicians, under the creative direction of Raffaele Curi. In 2009, the foundation acquired the 17th century Palazzo Rhinoceros, a six-story structure which stands between the Mouth of Truth and the Arch of Janus. Alda Fendi chose this location both for its historic importance and artistic legacy.

Archaeological evidence indicates that this quarter of Rome, known as Velabro, was the earliest Roman settlement, which Alda claims is “where Rome was born.” Prior to the renovation by Pritzker Prize-winning, Paris-based architect Jean Nouvel, the Palazzo was home to a number of artists, including Italian artist Ennio Tamburi (1936-2018). I visited Ennio Tamburi’s studio space in Palazzo Rhinoceros in 2016, just as the first marble slabs were being moved by Jean Nouvel’s renovation team. Ennio Tamburi told me he was excited about Alda Fendi’s vision, to mix contemporary art with the richness of Rome’s cultural history, allowing fresh air into the antique walls and courtyards of the Palazzo.

“Our space is not like other art spaces in Rome: we want to do something counter-culture in our palazzo, to give freedom to art and to take inspiration from the culture of the street,” Alda Fendi

Sadly, Ennio Tamburi never lived to see Alda’s finished project, however I do not think he would have felt let down. The masterpiece of modern architectural design by Jean Nouvel, respects the multiple layers of history of the Palazzo in Velabro, leaving walls bare and encompassing the original tiles. The complex now houses twenty-four luxury apartments, available to rent through The Rooms of Rome, a restaurant by Caviar Kaspia, on Terrazza Rhinoceros, with a 360 degree view and a rotating exhibition space, which most recently collaborated with the Hermitage Museum to showcase a sculpture by Michelangelo, Crouching Boy, 1530-34, lit by candles and accessible any hour or the day or night, due to the hotel concierge.

In front of Palazzo Rhinoceros is the 5th-century Arch of Janus. Alda Fendi has commissioned the cinematographer and lighting designer Vittorio Storaro to create a permanent illumination scheme for the arch, in front of which she has installed a life-sized resin sculpture of a rhinoceros designed by Raffaele Curi. The Rhinoceros represents the Ancient Roman idea of strength and unconventionality – a unique blend of old and new that can be seen by passers-by day and night!