Every time you turn a corner in Rome you stumble upon another ancient temple or Renaissance masterpiece but have you ever wondered what lies beneath your feet? Acres and acres of tombs! Rome is home to a vast underground maze of catacombs carved out of the soft, volcanic tufa stone that surrounds the city.

There’s a myth that during their persecution, Christians used the catacombs as a secret place to bury their dead but in reality the location of the catacombs was well known. Poor Christians simply couldn’t afford to be buried in their own private grave so they would arrange to have their bodies carried down into these tunnels, laid out in a sarcophagus or shelf in the wall and sealed over to await the Last Judgment…or the inquisitive eyes of archeologists.

Begun in the 2nd century A.D. these 60 burial sites were extended deeper into the earth as they filled up with bodies one layer at a time. In the 6th century more familiar church cemeteries took their place and the entrance to the catacombs were often blocked up to prevent them from being looted.

Possibly Rome’s most famous catacomb, this site extends almost 20 km and was the burial place of more than 10 martyrs and 16 popes. As the official catacombs of the Roman Church, the crypt of the popes was known as “the little Vatican” and you can still see the Greek markings “MPT” on two of them for “martyr.” You can also see burial place of Saint Cecilia, the patron saint of music, buried here for five centuries until her remains were transferred to a church in Trastevere.

CLICK HERE TO BOOK YOUR CATACOMBS OF ST.CALLIXTUS GUIDED TOUR

This cemetery, named after the martyr St. Sebastian, who is buried here, was originally called “ad catacumbas”. According to the widely acknowledged explanation, the name signifies “near the hollows”, because of the mines of tuff located in this area. The name was later used generally to indicate all subterranean Christian cemeteries. The tour of this catacomb, which has second-century pagan tombs along with Christian chapels, will take you down a staircase studded with pieces of sarcophagi with imperial seals. Underneath the church, you’ll see an area with three decorated pagan tombs with some very attractive frescoes and a floor mosaic. It is believed that both Christian and pagan funerals were held in the elaborate central chapel, the vault of which has acanthus and lotus-leaf stucco decorations. The Chapel of Symbols has early Christian symbols carved in it. Up another staircase is a dining room for funeral banquets. The graffiti date back to the second century. 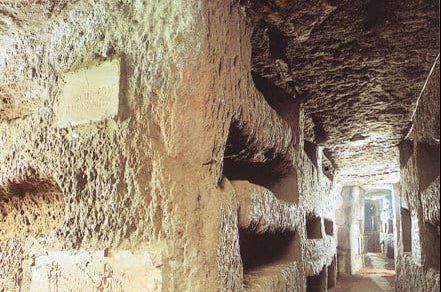 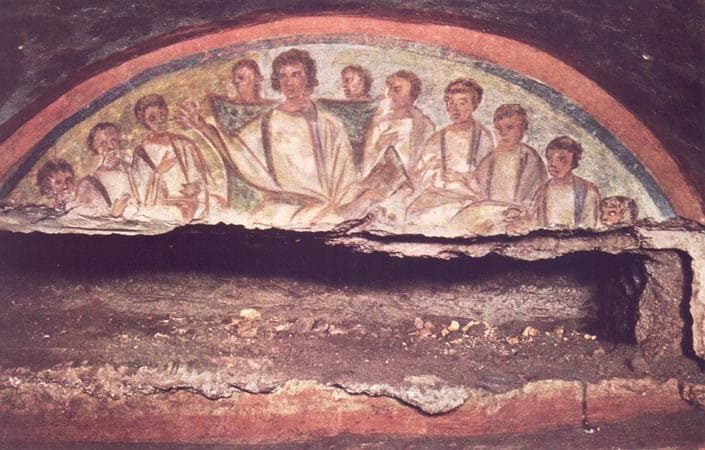 Rome’s oldest catacombs are the only ones that contain an ethereal sunken basilica through which you can enter the labyrinth below. Built in the 4th century, the basilica was abandoned in the 9th and not until 1870 was it reconstructed. You can visit the tombs of the martyrs Nereus and Achillius and gaze upon the most extensive inventory of catacomb paintings which includes an image of the Last Supper. They are also the only catacombs that still contain bones.

Run by an order of nuns, these catacombs were named after the woman who owned the land in which they were built and were known as the “regina catacumbarum” or the queen of the catacombs. They are famous for housing the oldest image of the Virgin Mary in existence. There’s also a chilling view point where you can look down and see the three levels of grave sites dug farther and farther into the earth to accommodate the dead.

The Best Underground Sites Of The Eternal City