A few Christmases ago, I was invited to a pranzo di Natale. The event of the year for many Italian families, it was an honor to join this typical Christmas lunch. Picture three generations of a large extended family gathered at the table (plus me), getting increasingly louder and more cheerful, and slowly eating themselves in a food coma. Boy, I imagined I was going to eat a lot, but the grand total of food served (and eaten!) was truly astonishing. Italians invariably complain that the amount of food at celebrations is too much, yet without heaps and heaps of food a party just isn’t a party. In this sense Italians are definitely my kind of people. 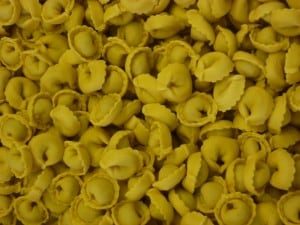 One must-serve course at the Christmas lunch table is cappelletti in brodo (‘little hats’ in a meaty, clear broth). Even though cappelletti are originally from Emilia-Romagna, you’ll see them at many Roman holiday tables too. They are tiny pasta cushions stuffed with a mixture of ground meats and a pinch of Parmigiano. The store-bought version is widely accepted, since cappelletti require a maddening patience only nonnas still seem to have.

And then the broth. Seemingly simple, it takes actually quite some time to get the flavor just right. After the soup is served, the boiled meats that went into the brodo are served separately.

For four persons (easy to double):

Put all ingredients in a large pot and add cold water until just covered. Bring to a boil, turn the heat down and let the broth simmer for about two hours. Remove the scum that forms at the top.

Strain the broth, add extra salt to taste if needed. Let the broth cool and skim the fat on the surface. Discard the vegetables, pick the meat. (These bits can be used in the broth or in other dishes).

Before serving, reheat the broth. Add the cappelletti to the broth and let boil for around 5 minutes. Serve piping hot. Add some Parmigiano Reggiano on top to taste.