What to do in Rome at Christmas

‘Tis the season to be jolly, and here in Rome jolly doesn’t even begin to explain the level of yuletide cheer and spirit you’ll feel after completing our top ten list of Christmas must-do’s.

Nothing says Christmas like Christmas trees, and nothing says Christmas in Rome like the mother of all Christmas Trees located in Saint Peter’s square. This year the Christmas tree comes from Andalo, a city situated in Trentino, in the north of Italy. The inauguration of the tree will take place on December 10th at 5pm.  Another option is the 25-meter-high Christmas tree in Piazza Venezia, adorned with 300,000 lights, which will be inaugurated on December 8th by the new Mayor of Rome, Roberto Gualtieri. The tree becomes a symbol of the fight against food waste: at the base of the tree there will be 17 gift packages, as many as the number of goals that FAO has given itself to fight hunger in the world.

Indulge in Panettone or Pandoro

By now you have probably noticed the colorful boxes of large round cake-bread stacked in every available corner of Rome’s supermarkets, pasticcerie, and even the local “cinese.”  Although it is considered perfectly acceptable by Italian standards to go hard on the panettone or pandoro of your choice before, during and after Christmas, be advised: not all panettone and pandoro were created equal. Here are some of the best places to purchase pandoro and panettone in Rome:

Don’t act so surprised, Rome has its fair share of festive holiday rinks for ice skating, even if the weather in December is rarely close to freezing. Rome’s Christmas ice skating rinks are usually in the following locations:

Christmas wouldn’t be complete without the star of the show (Baby Jesus that is, not Santa Claus). To get your fill of nativity scenes for a lifetime, check out the 100 Presepi in Vaticano, the most traditional Christmas exhibition in Rome, or peek into the major churches to see the various forms of Christmas Nativities. For example, inside the Basilica of Santa Maria Maggiore there is one of the oldest nativity scenes in Rome, built in the XIII century by the great sculptor Arnolfo di Cambio. 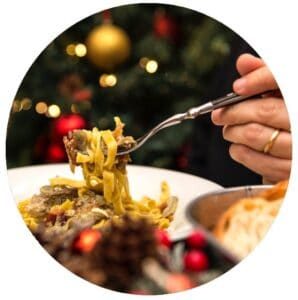 Enjoy Christmas lunch at a restaurant

This year you will be able to celebrate Christmas or New Year’s at a restaurants, but only if you have the Super green pass. According to the latest DPCM, from December 6th 2021 to January 15th 2022, only people vaccinated or healed of Covid will have the permission to go to restaurants. Check out all our suggestions for the best places to have a Christmas lunch in Rome.

One of the best ways to spread some holiday cheer is through music. However, for those of us who were not given the gift of song, caroling is out of the question, nor would we suggest caroling around Rome for that matter. Thankfully, the Gospel Festival hosts a series of holiday concerts guaranteed to lift your spirits.

See above. Music = Merriment and Holiday cheer. Attend a free concert in one of the beautiful churches throughout Rome.

Wander Around a Christmas Market

Christmas markets in Rome have always been part of the holiday fun, and they always bring in a certain joy during this time of year. Even if the Piazza Navona Christmas Market has been cancelled this year, you still have the possibility to choose between a wide range of options: from vintage to Japanese style, discover all the Christmas markets in the city!

It’s beginning to look a lot like Christmas, especially in the winding vicolos and side streets decked with twinkling lights and glowing orbs hung above. Take a stroll down these decorated stradas and admire the Christmas lights, taking in the festive holiday vibes. While you’re at it, try the chestnuts roasting on an open fire…

Via del Boschetto & Via Urbana

Catch a Christmas play or concert

This year the Natale all’Auditorium Festival offers a rich calendar of shows and concerts,  from December 4th to January 6th. The program includes more than 40 concerts of pop, jazz and rock music, together with the traditional Roma Gospel Festival, one of the most important gospel events in Europe, featuring some of the best choirs from the United States. A musical journey that will last more than one month, crossing various genres, from jazz to popular music, passing through swing and concert theater.

The Teatro dell’Opera di Roma offers many spectacles during the month of December. They start with Tosca, the famous Puccini’s opera, whose premiere will be played on December 4th. Then two ballets, Lo Schiaccianoci by Tchaikovsky (19 Dec-2 Jan) and Coppelia Suite, performed by the students of the Teatro dell’Opera dance school (15-17 Dec).

What’s closed in Rome at Christmas

The Vatican Museums will be closed on December 25th, while on the 24th and 31st they will be open until 3.30pm (last entrance 1.30pm). The Colosseum Archeological Park and the Borghese Gallery will be closed on December 25th and January 1st. As far as restaurants are concerned, many will be closed on Christmas Eve and Christmas Day (but not all, you’ll find many restaurants offering delicious Christmas Eve and Christmas Day menus, especially in the centro storico). While on New Year’s Eve restaurants are always open – but you should book in advance. Remember that according to the latest Government restrictions, from December 6th 2021 to January 15th 2022, only people with Super Green Pass (vaccinated or healed from Covid) will be allowed to go to museums and restaurants.

Check out the best NYE parties in Rome