..between redevelopment and gentrification

Did you know that Rome also has a Modern Colosseum? That not all bridges are in travertine and there is a (wannabe) amazing cultural centre of 25.000 sqm at the heart of Testaccio neighbourhood?

Ostiense and Testaccio are the areas of Rome where you can still find warehouses, docks, pavillions and industrial buildings, some of which are charmingly abandoned while others have experienced reconversions and ultimate makeovers; the perfect landscape for an urban safari!

The industrial development of this area started in 1870, when Rome became the capital of Italy. Thanks to the river (at that time navigable) and the railway from Roma to Civitavecchia (connected to Termini by the Ponte di Ferro in 1863), this part of the town was picked out to become the industrial centre of the newbie capital and consequently the area was rapidly transformed. 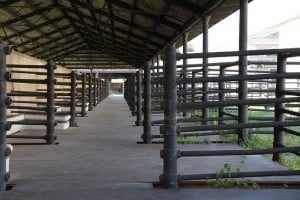 In 1890 the Mattatoio (slaughterhouse) was moved here from downtown, and was soon followed by many tanneries that opened along what we still call “Via delle Conce” (Tanneries Street). At the beginning of 20th century the industrial development of the area was pushed (and -at the same time- driven) by the construction of the Porto Fluviale (river harbour) followed in 1910 by more industrial buildings such as the Capitaneria di Porto (port authority office), the Dogana (customs) and the Mercati Generali (general markets), a huge complex of pavilions and warehouses now “on its way to reconversion” (i.e. nastily abandoned). In the same year the Anglo-Roman gas and energy company also moved to what later was called “Italgas area” (still now overshadowed by the undisputed symbol of Ostiense neighbourhood: the Gasometro -gas holder); the establishment of the energy company in 1913 brought about the construction of the first public electrical power plant: Centrale Montemartini, which now hosts a great museum (www.romeing.it/centrale-montemartini-museum/).

The heart of this industrial district was represented by the Magazzini Generali (general warehouses), built in 1915 under the supervision of architect Tullio Passarelli: a couple of huge warehouses from which several metal structures emerge majestically and extend to the river. Abandoned in 1945, they now host the Istituto Sicurezza Antincendi, a.k.a. the Firemen Training Centre, with classrooms, training spaces, cafés, a conference room and company lodgings.

Private entrepreneurs weren’t immune to the commercial appeal of the area. Among those who built their factories here are: Mira Lanza, whose buildings now host the Teatro India (the son of the more central Teatro Argentina, where you can enjoy the “Off-Broadway scene” of Rome), Molini e Panifici Biondi, which now has been reconverted into the most amazing complex of stylish lofts in Rome (therefore affordable only by several famous Italian actors currently living there), the Società Anonima Lavanderia Roma, whose building now hosts the Literature Faculty of Roma Tre University and the Vetrerie Riunite Bordoni, now hosting the office of Roma Tre University’s Chancellor.

PONTE DELL’INDUSTRIA or, as we all call it, PONTE DI FERRO (Iron Bridge) connects via del Porto Fluviale with via Antonio Pacinotti and with its industrial charm it surely is one of the most wonderful bridges of Rome. Pope Pio IX wanted to connect the new Termini station with the Roma-Civitavecchia railway line and a Belgian company was responsible for its construction between 1862 and 1863. Initially it was raised in the middle to allow the passage of freighters along the river but in 1911 it was partially reshaped and nowadays it’s meant for cars and pedestrians instead of trains. Under this bridge, on the right bank of the river there is one of the few cycling lanes of Rome, while on the other side there is a live music/cinema/theatre manifestation during the summer.

GASOMETRO (gas holder), or “Modern Colosseum” as we call it, is now abandoned. Actually there are 3 of them: two smaller ones built in 1910 and the biggest (92 meters high!), popular one built in 1937. It was used to collect the “gas for the city” (a particular gas mixture serving both domestic usage and town illumination), which during the ’60s was replaced by methane and therefore those buildings became useless. This extremely romantic industrial coliseum is made by 1551 iron poles and it is 63 meters in diameter! During the white night of 2006 the Gasometro became the Luxometro, an amazing LED installation by Angelo Bonello.If you missed it, you must watch this video: http://www.youtube.com/watch?v=IEGWO6MnTII

EX-MATTATOIO (former slaughterhouse): This vast, beautiful complex of wings and pavilions covers an area of 25.000 sqm in the heart of Testaccio neighbourhood. Designed in 1888 by Gioacchino Ersoch, it was destined to be a slaughterhouse and distributed meat until 1975 when it was abandoned. Now it hosts a police office, the Architecture Faculty of Roma Tre University, the contemporary art museum MACRO Testaccio (the son of MACRO in via Nizza), La Pelanda, another important contemporary art venue of the capital and a squat place called Villaggio Globale (where we all enjoyed the most of our dancing youth!). Within its warehouses is born the popular gay party “Muccassassina” (“Killer Cow”), and since 2002 the summer manifestation “Gay Village”, even if both nowadays have moved the party to other locations. From 2007 in this space there is also the Città dell’Altra Economia (town of a different economy), a project devoted to themes such as fair trade, organic and biological food, recycling, renewable energy and more. Overall the former slaughterhouse has been transformed into a great and eclectic cultural space within a beautiful industrial venue but its potential is greater still than the current fragmented and sometimes sleepy scene; let’s hope it will get more dynamic soon!