This article was originally published on March 5, 2018

A few years ago, when I stepped out of my apartment on the brisk morning of my first March 8th in Italy, I was greeted with an excited “Auguri!”, an Italian expression often used for birthdays and celebrations, by my beaming ten-year-old neighbor who was on his way to school. He noticed my confused expression and explained that it was “La Festa delle Donne” or Women’s Day. I smiled back and thanked him. I was aware of International Women’s Day, but had never been complimented so sweetly because of it.

Although this day, which supports gender equality and women’s rights, has been observed worldwide for over 100 years, it seems especially relevant this year. The end of 2017 and beginning of 2018 revealed much of the ingrained, and often ignored, misogyny that is still prevalent throughout society. Despite being dismissed in the past, after many cases of mistreatment, harassment, and abuse of women were exposed, women found an audience on an epic and global scale. The world watched as women across different industries, nations, and ideologies came together to support each other.

In Italy, a country that is often a little slower to change, which is also one quality we love about it, whispers of this global unification of women and desire for equality have been slowly growing. On January 20th, 2018 for instance, Italian women joined the crowd of international women and men who marched in reaction to global and political events at Rome’s second annual Women’s March. This is not the first time Rome’s women have stood up against what they perceive as unjust. 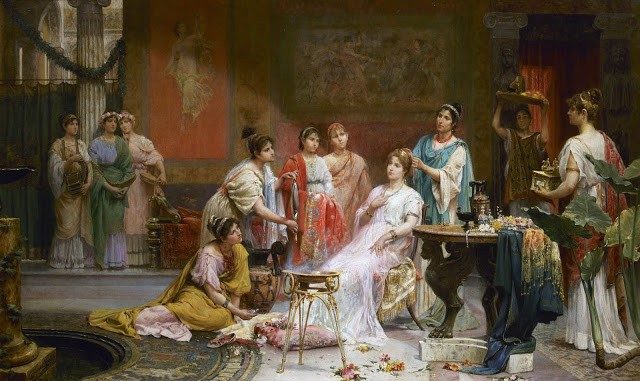 In 195 BC, the women of ancient Rome marched to repeal the outdated ‘lex Oppia,’ laws which controlled women’s appearances and limited their access to financial independence. Primarily, the laws prohibited women from buying and wearing too much gold or too many colors, especially the color purple, because it indicated status. In sucha patriarchal society, one where women were dominated by husbands and fathers, how a woman presented herself was often her only way to hold any power or autonomy. Refusing to be confined in this way, ancient Roman women from every social class banded together in protest and forced the senate to revoke these laws.

These courageous, passionate women from ancient Rome mirror the Italian women of today. When I asked several Italian and non-Italian women, what it means to be “una donna italiana,” it was clear that Italian women have admirable qualities that deserve to be celebrated, including intelligence, strength, determination, and assertiveness.

We must remember that Italian women have been facing deep-rooted resistance to gender equality for centuries. Women in Italy were only granted the same voting rights as men in 1945, the right to divorce in 1970, and the right to have an abortion in 1978. There are areas of Italy that are still fiercely attached to the idea that women should only perform the traditional female roles of cooking, cleaning, and raising children. Italian women have persevered and today, they have more life and career opportunities than every before. Now, more Italian women go to university and work in a range of professional fields. Even if Italians women’s lives are family oriented, they often are the main decision makers and run the household.

To celebrate ‘la donna italiana,’ let us revere and remember the eight inspiring Italian women below, who paved the way for Italian women today in the areas of education, science, politics, writing, and art.

Elena Cornarco Piscopia: first woman in the world to receive a university degree 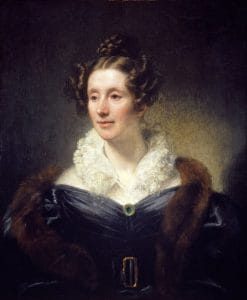 Born in 1646 in Venice, a daughter of a nobleman and a peasant woman, Elena Cornarco Piscopia had a natural aptitude for academia and became the world’s first woman to receive a university degree. After being denied the chance to study theology at Padua University because it was declared a man’s field, she applied again and graduated with a degree in philosophy in 1678. Elena also spoke seven languages fluently; Italian, French, Spanish, Greek, Latin, Hebrew, and Arabic, played three instruments; the harp, harpsichord, and violin, wrote original songs, and was well-versed in mathematics and astronomy. Toward the end of her life in 1684, she did extensive charity work for the poor. 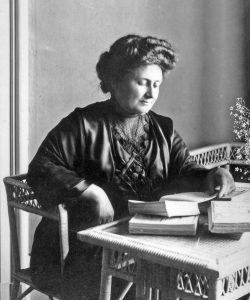 Maria Montessori, a doctor, educator, and entrepreneur, who lived from 1870 to 1952, created the philosophy behind the renowned Montessori school system. Growing up in Rome, she had a desire for knowledge, a trait that was not often encouraged in Italian women at this time. She graduated from medical school in 1896, becoming one of Italy’s first female doctors. Because she had studied educational theory and her medical practice focused on psychiatry and child development, Maria created an educational philosophy that emphasized children’s independence and individual growth. In 1907, she opened the first Montessori school, “Casa dei Bambine” in Rome. Today, there are over 22,000 Montessori schools in roughly 110 countries. Maria often publicly spoke and wrote about the need for more opportunities for women and is considered one of Italy’s most important feminists. 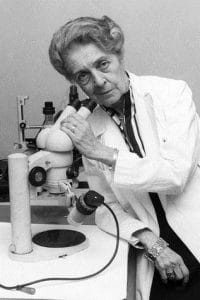 Rita Levi Montalcini, who died only six years ago at 103, was one of Italy’s top neurologists. As a young woman, she ignored her traditional father who tried to dissuade her from pursuing medicine. Later, she was forced to stop her research as a neurologist, because Italy’s leader, Benito Mussolini, banned Jewish people from academia. However, she continued studying science in secret, even after her family was forced to flee Italy when Germany invaded. After the war, she based her life and work in the U.S. and Rome. In 1986, Rita along with biochemist Stanley Cohen won the Nobel Prize in Physiology or Medicine for discovering the nerve growth factor (NGF). These findings have played an essential role in understanding different types of cancer and diseases like Alzheimer’s and Parkinson’s. 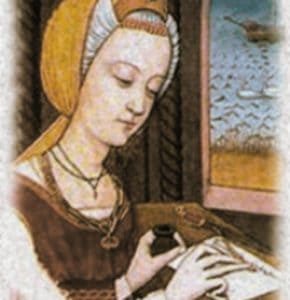 At the end of the 11th century and beginning of the 12th, Trotula was the world’s first female gynecologist. She grew up in Salerno, where she also went to medical school. Trotula was also one of the world’s first female professors and taught at her alma mater. As a gynecologist, she was ahead of her time, arguing that women should be given opium to relieve the pain of childbirth, despite the widespread belief that it was God’s will for women to endure such pain. 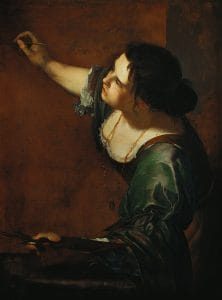 During the 17th century when art as a profession was restricted to men, Artemisia Gentileschi became Italy’s first recognized female painter. She is now thought to be one of the greatest painters of the period following the acclaimed Italian painter,
Michelangelo Merisi da Caravaggio. Among other limitations, women were not allowed to study life drawing, because it was deemed inappropriate for them to see naked bodies. Artemisia’s paintings focus on the female experience and are a response to and protest against the great gender disparities of her time and a traumatic sexual assault by a male art tutor. Later in her painting career, she received the recognition she deserved and was the first woman accepted into Florence’s most exclusive art
academy, “Accademia delle Arti.” 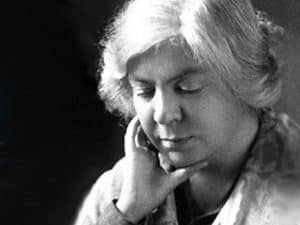 Born on the island of Sardinia in 1871, poet and novel writer, Grazia Deladda was the first Italian woman to receive the Nobel Prize for Literature in 1926. She is praised for her authentic writing, which described the picturesque life in Sardinia, but also did not shy away from the harsh difficulties that its poor faced. Grazia continued writing in Rome, despite having breast cancer, until her death in 1936. Her talented work and dedication to writing, put Sardinia on the literary map and has inspired countless other female Italian writers. 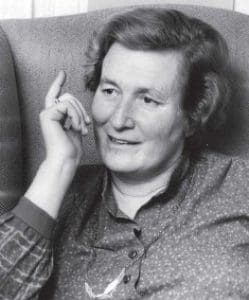 Born in 1927, Tina Anselmi who died two years ago, was a pioneering politician who became Italy’s first female cabinet member. Despite only being a young teenager when the war broke out, she actively participated in World War II resistance. After the war and before entering politics, Tina studied literature, taught in primary school, and was active in the teacher’s union. Following her many re-elections to serve in the Italian Chamber of Deputies, she was elected to be Italy’s first female Minister of Labor in 1976. Two years later, she became the Minister of Health. In government, Tina worked hard to establish equal pay and lobbied for fathers to be recognized as primary caregivers for their children, so that women and men could have equal opportunities.

Rita Borsellino: one of Italy’s most prominent anti-mafia activists 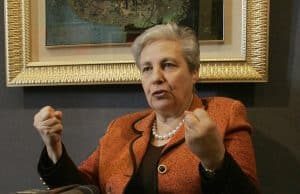 Still alive today, Rita Borsellino is a Sicilian politician and one of Italy’s most prominent female ant-mafia activists. Three years after her well-known brother, the anti-mafia judge Paolo Borsellino, was killed by the mafia in 1992, she formed “Libera.” This
organization works to dissuade the Sicilian youth from becoming involved in the mafia. Rita grew up with Maria Falcone, who also became an important anti-mafia activist in Sicily and whose brother, Giovanni Falcone, was also an esteemed judge who worked against and was later killed by the mafia. United by their tragic shared experiences, upbringing in Sicily’s capital of Palermo, and dedication to improving young people’s lives, Rita and Maria are two incredible women who are continuing their brothers’ work to combat mafia culture despite the major risks.

Remember to acknowledge and appreciate the women in your life this year on March 8th and for years to come!