On August 3rd 2013, the Via dei Fori Imperiali was closed to traffic. Now you can enjoy a leisurely passeggiata (stroll) straight through the Roman Forum without even needing a ticket. This mini guide will take you from the Campidoglio to the Colosseo through the heart of the ancient city, one of Rome’s most spectacular sights. 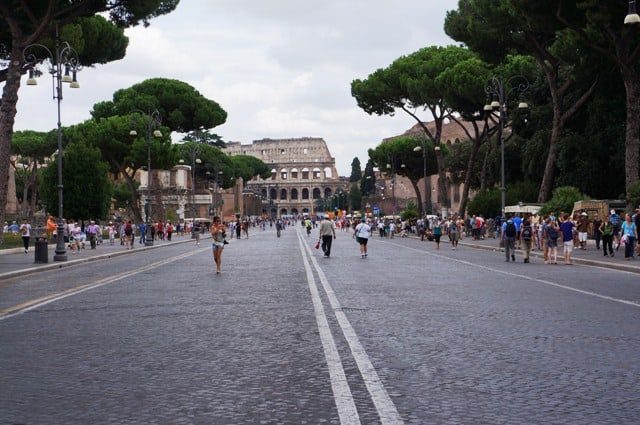 The Via dei Fori Imperiali was constructed in 1932 by Benito Mussolini to connect the balcony of the Palazzo Venezia (where he gave his speeches) to the Colosseum. Made famous by military parades and Audrey Hepburn and Gregory Peck’s scooter ride in Roman Holiday, archeological excavations on either side of it have revealed the full extent of Imperial Rome’s “downtown.” Mayor Ignazio Marino hopes to pedestrianize many more historic sites in Rome to create the largest archeological park in the world.

Imagine walking from one end of the Forum to the other, from Trajan’s Column to the Colosseo. Covered walkways and colored, marble floors connected the large public squares that held libraries, law courts, and museums. You would hear the splash of fountains, the speeches of great orators, and the shouts of merchants selling silk from China or spices from the Middle East.

Around you would rise marble clad temples similar to the Vittorio Emanuele Monument now overlooking Piazza Venezia. Their brightly painted friezes depicted conquests of the emperors they glorified. Bronze statues of gods and men would have shone in the sun, decorating the capital of the greatest empire in Western civilization. 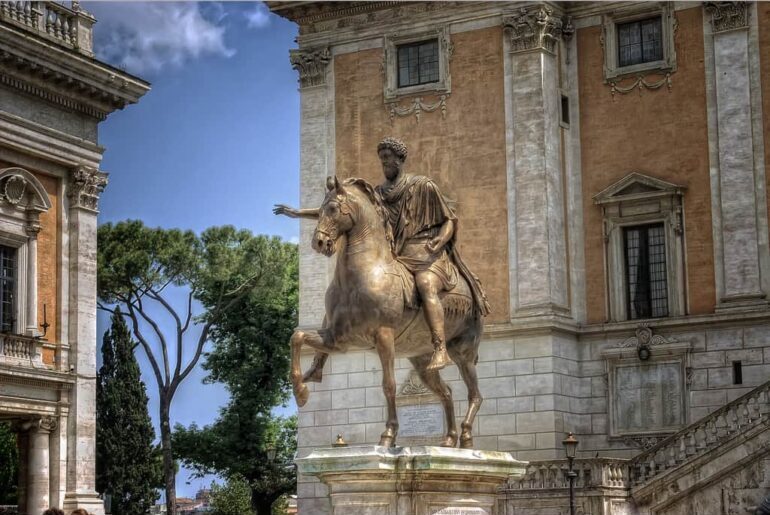 Start on the Campidoglio or Capitoline Hill, in the piazza designed in the 16th century by Michelangelo. This is one of the seven hills upon which Rome was founded and was the location of a great fortress where citizens fled in 386 B.C. to escape a sudden barbarian invasion that devastated the city. If it hadn’t been for a flock of geese whose squawking warned the guards of a secret night attack, Rome might have fallen to the Gauls that day. After paying off the invaders, Rome was hastily rebuilt leaving no time for city planning which explains why so many streets to this day are an un-navigable tangle of dead ends and twisting alleyways. Now the hill houses the Capitoline Museums and Rome’s senatorial palace rising behind the bronze statue of Marcus Aurelius, one of Rome’s greatest emperors.

If you are facing the statue, take the path behind him to the left to continue to the Forum passing a small statue of the mythical Romulus and Remus. These twin brothers were abandoned in the marshes to die but, rescued and raised by a wolf, they went on to found the city of Rome. You will come to an iron railing over which you can look down into the Forum and across to the Palatine Hill where Romulus crowned himself king in 753 B.C. 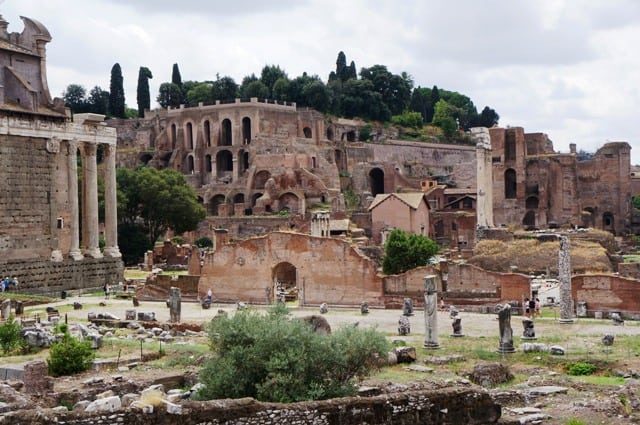 The Foro Romano was the political and administrative center of the Old Republic (started in 510 B.C.) and was also a cultural and social gathering place for the people of Rome as they left behind the reign of kings started by Romulus and embarked on a new democratic society governed by patrician Consuls, Tribunes of the Plebeians, and powerful military generals. 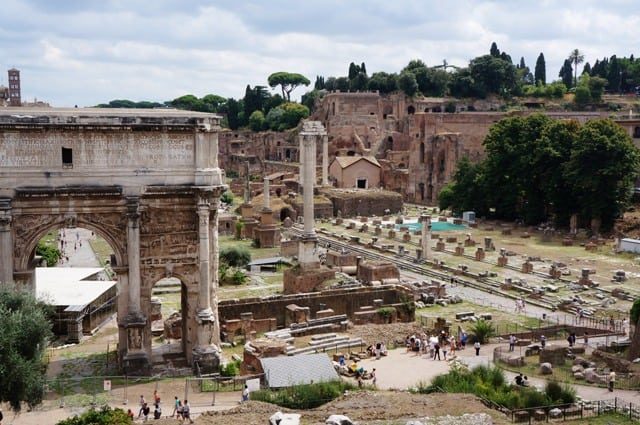 To your left is the Arch of Septimius Severus (212 A.D.) commemorating his victories in battle. To your right are the eight Ionic columns of the Temple of Saturn, the Forum’s oldest temple, (it’s base dates to 498 B.C.). Here, Romans celebrated Saturnalia, a festival held each December where master and slave switched roles and traditional morality was abandoned, a welcome distraction from cold winter days. Later Christians would organize Christmas at this time of year to replace this pagan custom, but some of the old traditions (like exchanging gifts, singing in the streets, and pine tree decorations) live on to this day. The Via Sacra (Sacred Way) was Rome’s main street stretching from Saturn’s temple to the Arch of Titus (80 A.D.) which rises in the distance at the far end of the Forum. Running parallel to the Via Sacra, its not a stretch of the imagination to see where Mussolini got his inspiration for the Via dei Fori Imperiali. 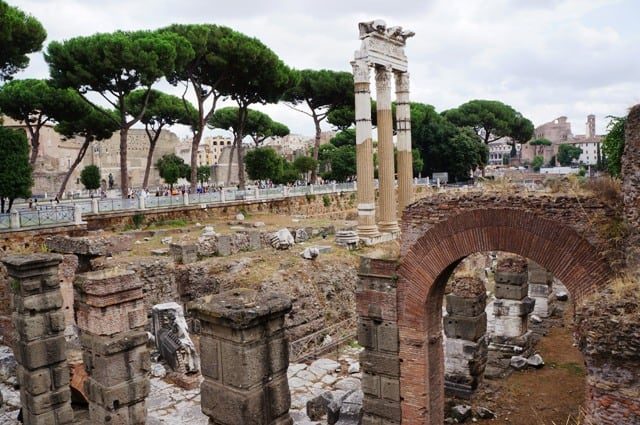 Continue down the road that curves to your left to the Forum of Julius Caesar.

The Forum of Julius Caesar

To accommodate the growing Republic and to put his own stamp on the city, Julius Caesar built his own Forum next to the original forum square. From here you can see the original ground level of ancient Rome, far below modern street level. The three columns standing on a much eroded base were part of The Temple of Venus Genetrix (46 B.C.) erected to remind Romans of Caesar’s supposedly divine ancestry. Inside would have stood a statue of Venus as well as one of Caesar and his mistress, Cleopatra (which the people did not find amusing).

By appointing himself supreme consul for life, Caesar changed the course of history. Even though he was assassinated by a group of senators in 44 B.C., their dream of returning Rome to a Republic was squashed by Caesar’s adopted son Octavian Augustus who, in 27 B.C., started the reign of Imperial Roman emperors that would last until the 5th century.

Continue onto the Via dei Fori Imperiali which cuts straight through the Imperial Roman Forums that were designed by Caesar’s successors during the first two centuries of Imperial Roman Rule known as the Pax Romana (Roman Peace). 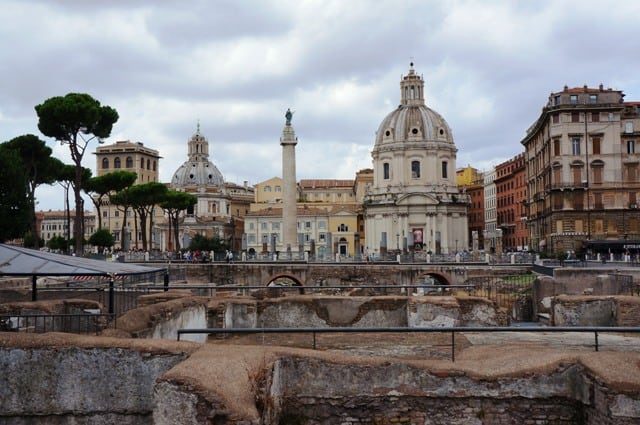 To your right is the Forum of Trajan marked at one end by Trajan’s Column, a tribute to the emperor’s triumph over Dacian barbarians. The details of the battle would have been colored and could be viewed from the balconies of a large basilica and temple that stood beside it. There is even a spiral staircase going up the inside of the column, accessible only to art historians by special request. A 16th century bronze statue of Saint Peter tops the column reminding us that the might of pagan emperors was superseded by the Catholic church.

Stroll down the street toward the Coliseum. On your left you will pass the hemisphere of Trajan’s Market and the Steps of the Temple of Mars Ultor (Mars, the Avenger) that Augustus erected in the center of his Forum to commemorate his defeat in 42 B.C. of two of Caesar’s murderers, Brutus and Cassius. Don’t miss the slender Forum of Nerva right before Via Cavour.

On your right you will pass more ruins of the original Roman Forum, the boxy Curia (or Senate Building) dating back to the Old Republic and the ‘hidden’ ticket office at the end to Via Cavour.

A 12 euro ticket will give you a closer look at The Temple of Vesta, The Altar to Caesar (where he was cremated), the Domus Augustana and other palaces on the Palatine Hill and entry to the Coliseum.

TIP: buying your tickets at this entrance will save you a long wait in the line to the Coliseum! 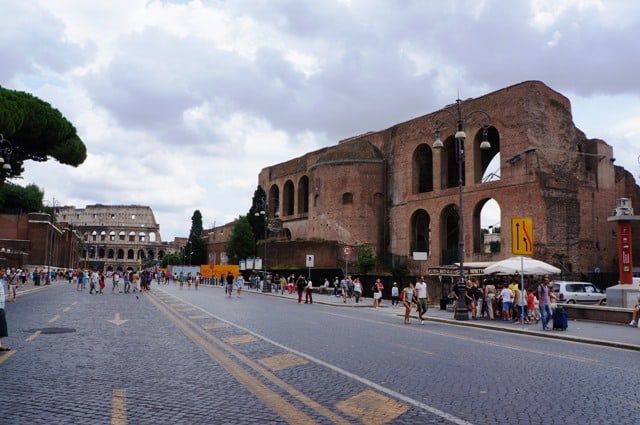 Continuing down the street, to your left rises the impressive Basilica Nova inaugurated in 312 A.D. by emperor Constantine after he defeated the building’s creator emperor Maxentius. The last of Rome’s great Basilicas and its biggest, its coffered ceiling (which can be seen through the large windows) would have been plated in bronze, its floors and walls bedecked in marble. Constantine was responsible for moving the capitol of the empire from Rome to Constantinople (now Istanbul) in the 4th century and turning a pagan society into a Christian one.

Beyond this lies the Forum’s most romantic temple, the Temple to Venus and Rome created by Emperor Hadrian in 135 A.D. in honor of the divine ancestress of the Julian family and the divine embodiment of the spirit of Rome herself. 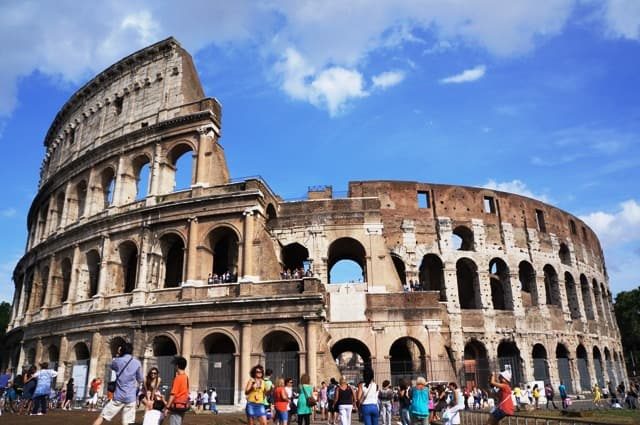 The Coliseum, the iconic symbol of Rome, has been standing for almost 2,000 years and represents a shrewd political move by its creator, Emperor Vespasian. Finished in 80 A.D. the Coliseum now stands on what used to be an artificial lake that connected the despised Emperor Nero’s Golden Palace to the already existing imperial palaces on the Palatine Hill. Where once stood a testament to imperial ego and grandiose self-importance, now stood the largest amphitheater in the world sitting up to 70,000 people.

The Coliseum was open every day providing rich and poor Romans alike with brutal and bloody gladiator games, all for free. Here is where they flooded the arena and staged naval battles, constructed forests, hills and small lakes to hunt wild animals captured all over the empire to be released through trap doors in the floor. Here is where famous gladiators and nameless slaves fought to the death to the cheers of the crowd until the 5th century when these violent ‘games’ were abolished.

The closing of the Via dei Fori Imperiali pays homage to Rome’s great past. What now lies in ruins still has power over our imaginations 2,500 years later. At night, the rovine (ruins) are lit up to create a truly atmospheric walk back in time through the political, cultural, and religious center of the ancient world.