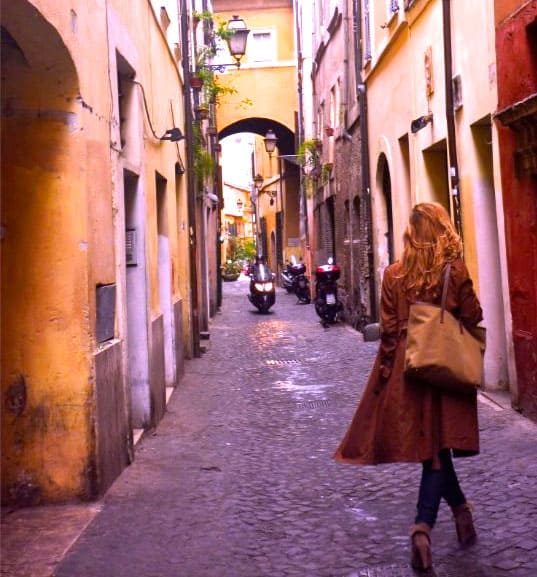 Things are so exciting this month I can hardly sleep at night. Just yesterday I signed two deals for TV shows set in Italy that I filmed, edited and hosted myself. I passed my culinary exam at Accademia Barilla, finally conquering the rules and intricacies of Italian cuisine. And I realised that I no longer have to translate in my head – I’m thinking directly in Italian. It’s ever so fashionable to speak about the beauty of being a resident in Italy; to go back to your home town and declare with unbridled disdain that the coffee, the weather, the mentality is inferior. How epically romantic you feel to have escaped it all for piazzas and melodic vowels and a lifestyle envied by every outsider. But I’m about to be rather frank about the one thing no one wants to admit about living in Italy. It’s not cool, it’s not poetic and yet it happens to almost everyone who makes the leap to live here full time.

I was on a press tour recently in Toronto and a woman came up to me after I gave a speech on the experience of creating a life in Italy.

“I just wanted to say that I am so inspired and I completely agree with everything you said. I actually did what you did and went to live in Rome but I only ended up staying for three months.”

“Oh really? Did you enjoy it?”

“Yeah, absolutely! But… the thing is…”

At this point the woman seemed to lower her voice as though sharing something blasphemous or at least highly disrespectful.

“…I found it really, really hard to make friends.” She said the words. It was out.

I grabbed her hand instinctively and cried, “Oh don’t worry! It happened to me too!” It was as though we’d both just admitted to owning vibrators in a public space. She was relieved, confused, united, thrilled to hear there wasn’t something wrong with her.

If you’re a student, it’s slightly different. You probably hang out with your classmates and you have set group excursions scheduled into your free time. But if you’re one of those dreamers who throws everything in, moves to Italy alone and has visions of creating an authentic life here, the challenge of finding a genuine social life with friends you really open up to and care about can be frustrating and seemingly impossible. On the plane over here, you see yourself laughing over espresso at the local bar, chinking wine glasses at someone’s family home for Sunday lunch and having a support network of friends who can meet you for aperitivo to talk through your romantic troubles with your new local love. This does happen, but you need to be patient and you need to throw yourself into this city.

As a writer and a bookworm I’m very comfortable being a bit of a loner and just observing the city. I would take myself out for lunch or dinner and enjoy eavesdropping on other tables’ conversations to improve my colloquial Italian. I would walk for hours in the evening taking in the architecture and the labrynth of palazzi. On my walks there were always families take a ‘passeggiata’, couples fighting or fawning over each other, even the lone walkers seemed to be on their phones cooing to a loved one, “Dai, ci vediamo a casa!”

On my good days I found the anonymity enthralling. I was a student of this country I had loved for so long from afar and despite the fact that I could pass a whole day without speaking to anyone, I felt thoroughly immersed and considered it an honour to finally be a part of this whole scene. On my bad days, however, on days when I was coming home in the bone-chilling dark from a tedious 9euro/hour job, in relentless rain, laden with those stupid flimsy shopping bags that would split open as I hobbled across the square spilling all my groceries… the same evening when I would find my electricity had cut out in my shoebox monolocale and therefore I couldn’t make soup on my electric camp stove AND the landlord was away in her villa in Tuscany for the week with no intention of solving my situation… the very night I would scroll Facebook and see Italian acquaintances who had said flippantly “ah si, we should meet some time” posting their infinite dinner and party choices for that evening.

I remember spending my first Christmas totally alone, feeling closer than ever to the buildings and relics of Rome and yet so far from any intimate human relationship. Of course, all that changed over time and after sticking it out I found myself so inundated with exciting invitations that I was sleeping an average of two hours a night just to keep up with all the ‘appuntamenti’, ‘feste’, ‘serate’ and ‘aperitivi’.

It’s east to talk about how you’ve run away to live in Rome, however, it seems no one wants to admit just what an art it is to make real friends as a foreigner in this country when you first arrive. Here below are just a few tips to become less of a loner in the most beautiful city on earth.

1. You can easily make coffee at home in the morning but push yourself to go out to one cafe on a regular basis. By going in at around the same time each day you’ll start to be recognised as more that just a tourist passing through. Plus you’ll inevitably meet people who live in the area. Stand up at the counter because sitting down you’ll only meet tourists. There’s something so secretly triumphant about the first time you get an Italian barista making your preferred coffee and dishing out your favourite cornetto as soon as you walk through the door without you saying a word.

2. Resist the easy English invitations. It’s comforting to speak in your native tongue but English speakers will often be passing through for a gap year and no sooner have you found a dear friend, they’ll be packing up to return home. Italians are inherently social. Once I made friends with real locals I was fielding invitations to parties on Monday nights, trips to the islands in summer and Tuscan dinner parties in winter. You can make some great like-minded friends in expats because we’re all dreaming nomads but also make an effort to go out with Italians and you will understand this country on a whole other level.

3. Aperitivo is the most beloved time for socialising in Italy. Those hours between coming out of the office and heading out to dinner are buzzing with Italians and expats who crave conversation with new friends. People are usually standing and mingling so even if you’re alone or in a pair, it’s more than acceptable to chat to strangers.

4. Stuff is going on every night, you just don’t know about it. Some nights you can walk through Piazza Navona and think the city has all gone to bed but in fact, it’s just about knowing where to go. The guys who put together the events calendar for Romeing are amazing. Literally every night there is something cool and social going on in some part of the city, from swing dancing and tango to vintage markets and speed dating to language exhange groups.

5. Join a gym. It sounds like the worst idea ever in this exquisite city. Who would want to be stuck on a treadmill when we’re living amongst all this beauty? But I really came to love getting up early, grabbing my bike and a quick espresso and heading to a pilates class on a Saturday morning where you instantly bond with other early risers. In the evenings, I would head to boxing classes and meet a whole different group. If you choose a gym near your house you’re more likely to meet people who live locally.