The walled city of Tuscania is often referred to as the “pearl of the Roman and Etruscan civilization” due to its extraordinary artistic and historical beauty. It is a place where nature has blended with ancient history and with time left behind beautiful remnants of the past, including a number of Etruscan tombs. The tomba della regina (tomb of the queen) is a cave carved into tufa stone that, according to tradition, belonged to an Etruscan princess.

Tuscania itself is strikingly picturesque so you should spend some time walking down the narrow streets and pathways. It is surrounded by green rolling hills and life moves slowly in the city, quietly permitting you to appreciate the beauty of the country. Pay a visit to its most famous attractions, two Roman cathedrals – Saint Peter and Saint Mary – that overlook the Torre Lavello park and the Marta river.

Every season is perfect for a visit to Tuscania but the best time to go is in July while the lavender and literature festivals take place. 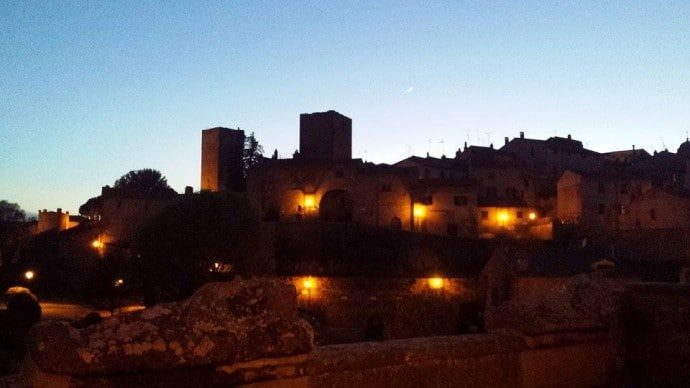 There are a number of restaurants where you can taste traditional dishes, some of the most famous are just steps away from the panoramic park of Torre Lavello. Try “da Alfreda” or “Terziere di Poggio” for local delicacies ranging from the olive oil to game to seasonal vegetables.

Stay at the B&B Casalino in Montebello, an agriturismo near Tuscania.

Take the train from Termini to Tarquinia or Viterbo and then the local Cotral bus.