A treasure-trove of artistic gems by Caravaggio, Raphael, Bernini and more 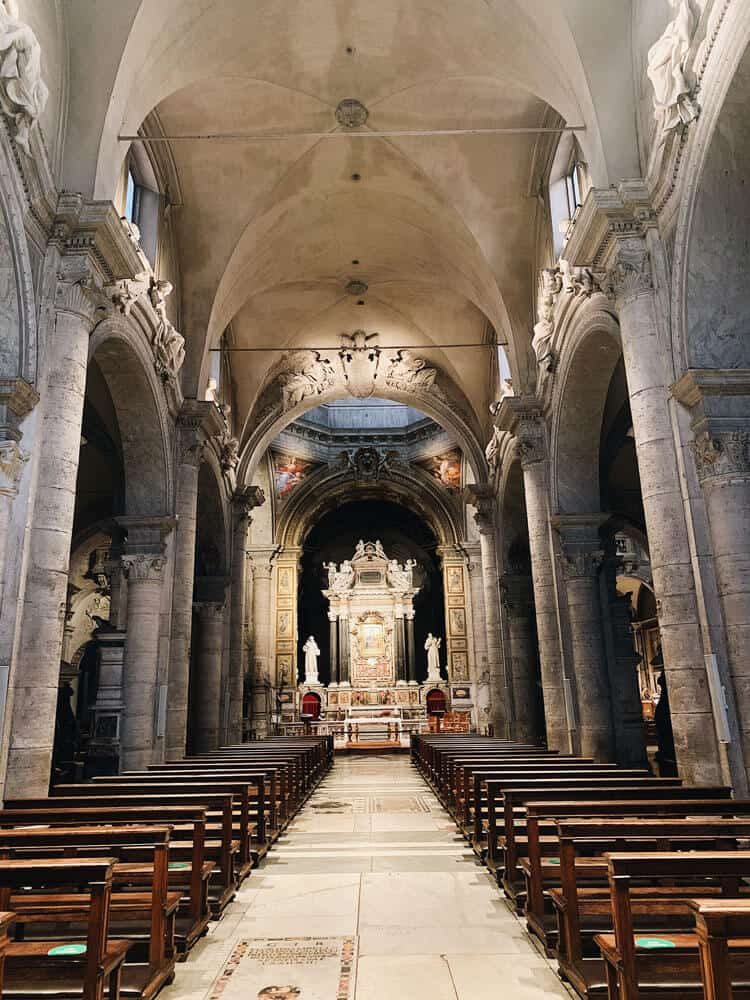 One of the most compelling features of Santa Maria del Popolo is the mystical history behind it. The history of the Basilica is connected to Emperor Nero and Pope Paschal II. After Nero’s suicide, he was later buried in the mausoleum of his paternal family at the foot of the Pincian Hill. On his ruins rose a colossal walnut tree described as “so tall and sublime that no other plant exceeded it in any way.” The tree got soon to be the haunted by many terrible demons attacking the area’s inhabitants and the travellers arriving to the city from the North through Porta Flaminia. Pope Paschal II delivered a ceremony of exorcism and then thumped the walnut tree with a determined blow to its roots, causing the evil spirits to disintegrate. The remains of emperor Nero were found among the ruins after the removal of the tree, which were later thrown into the Tiber. When the Pope liberated Rome from the demons, he devoted the North corner of Piazza del Popolo to Christian worship.

Caravaggio Masterpieces and the Cerasi Chapel

Michelangelo Merisi da Caravaggio, one of the best artists in the history of all time, is best-known for his naturalistic style of Baroque paintings. In 1600 Caravaggio signed a contract to paint two beautiful paintings for the Cerasi Chapel in Santa Maria del Popolo: “Conversion on the Way to Damascus” and the prestigious “Cruxification of Saint Peter“. They are positioned across each other, and on the altar between the two is the Assumption of the Virgin Mary by Annibale Carracci. 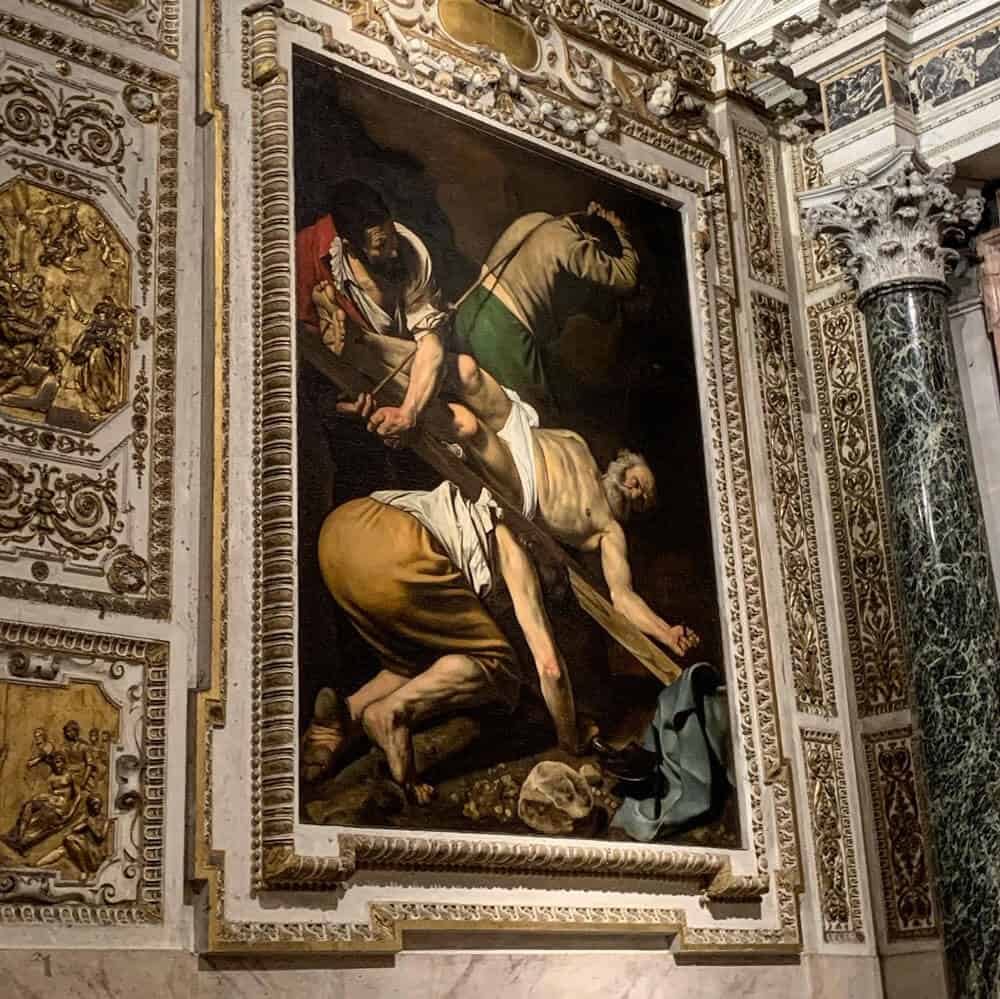 “The Cruxification of St Peter” by Caravaggio (1606)

The” Cruxification of Saint Peter” is a work by Caravaggio, painted in 1601 for the Cerasi Chapel of Santa Maria del Popolo. This painting portrays the sacrifice of St. Peter, who insisted on being crucified upside-down not to imitate Jesus Christ. Three middle-aged Romans, their faces shielded, struggling to erect the Cross, bearing the weight of the elderly, is a portrayal of their crime literally weighing on them. 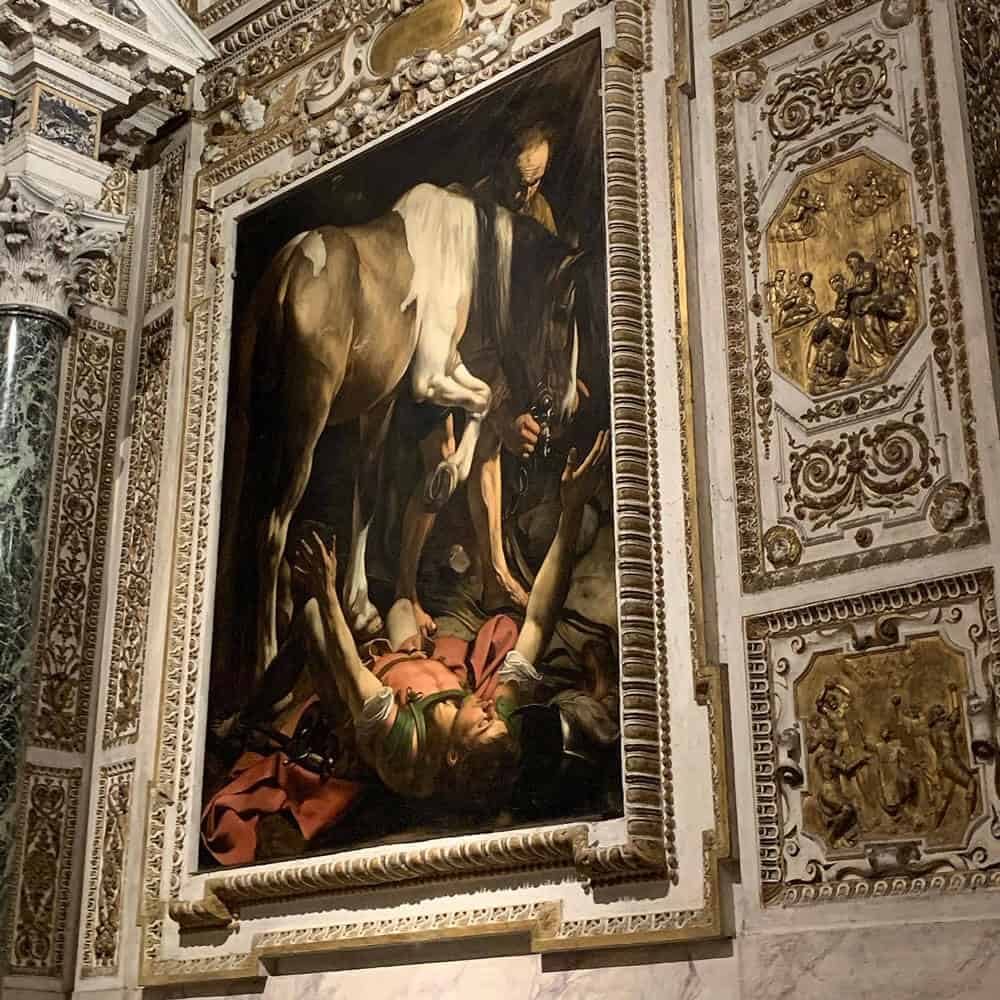 “The Conversion on the Way to Damascus” by Caravaggio (1601)

The “Conversion on the Way to Damascus” has almost an entirely dark background to highlight the plight of St Peter. Caravaggio was a man very close to the bible; through this painting he has also painted the horse and the man, but all the emphasis is put on Paul. As he is laying on the ground the brightness of God seems to stream down the white part of the horse, as Paul’s eyes are closed by God’s dazzling illumination. Here, Caravaggio makes the religious experience look natural. It is an angel-sustained Jesus reaching down toward a blinded Paul.

The Chigi Chapel is one of the most beautiful chapels in Rome. The altar’s paintings are surrounded by exquisite marble creating an ambiance that only Romans could achieve. Julius II granted the Chigi in 1507 to the Sienese banker Agostino Chigi, adopted by the Della Rovere family. Chigi, “indisputably the richest man in Rome,” became a prosperous patron of art and literature. He engaged Raphael to decorate the Chapel. The painter who had previously contributed to the new Basilica of St. Peter’s created a scale model of the Bramante design of the Vatican Basilica with the great entrance arch taken from the ancient model of the Pantheon. Even though many of Raphael’s mosaics were used, the Chigi Chapel remained unfinished. In the 17th century, Pope Alexander VII Chigi, the original owner’s great-grandson, determined to complete the family chapel. He engaged Bernini to carve the two side statues of Daniel and Habakkuk and the large funeral monuments of Agostine and Sigismondo Chigi. Based on the design by Raphael, the latter was initiated by Lorenzetto da Montelupo in 1522.

The Chapel dedicated to St. Austine was furnished in 1484 by Cardinal Girolamo Basso Della Rovere, who had the precious marble balustrade bit and the fresco work performed by helpers of Pinturicchio. The illusionist monochrome in the lower parts of the walls is particularly noteworthy. Vincenzo Camuccini restored them in the 19th century. The patron’s funeral monument is attributed to the School of Bregno and the relief of the Pietra on the altar steps to Gian Cristoforo Romano. The original floor decoration has been preserved in the Chapel. The reconstruction had a symbolic significance: that Nero’s evil walnut tree was replaced by the efficient oak of the Della Rovere.

The Cybo-Soderini Chapel is a side chapel of the Basilica. Its most important works of art are the frescos (the Invention of the True Cross and Exaltation of the Cross) by the Flemish artist Pieter van Lint and the wooden crucifix above the main altar.