Churches and Museums Where to See Caravaggio in Rome

Rebellious, inspired, arrogant, a murderer: the man now known as Caravaggio had a reputation no less shocking and dramatic than his work. His paintings ignited controversy with their unabashed portrayal of saints as common people in contemporary, urban settings. He infuriated the authorities but ignited the imagination of 17th century Baroque society with his naturalistic, bold and introspective paintings. 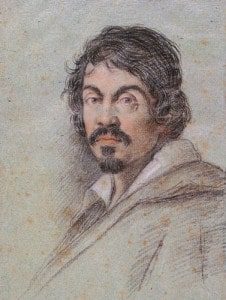 Caravaggio is actually the name of the town where the artist, known in his day as Michelangelo Merisi, was born. He came to Rome in 1592 at the age of 21 and within three years had established his reputation as a street-fighting bad boy and masterful painter. In fact, most of what is known about Caravaggio is from the police records. At various times he was reported for brawling, hurling a dish of artichokes into a waiter’s face, and fatally stabbing an opponent during a tennis match near Campo de’ Fiori–an offense for which he was banished from Rome. But when he wasn’t roaming the streets looking for trouble, Caravaggio was creating paintings that made him a celebrity in his time. Characterized by a theatrical use of light and dark, his paintings showed religious scenes in a gritty, realistic style that the public, bored with stylization and perfection, loved. It may have shocked the church, but the people were ready to see faces like theirs on canvas for once. Caravaggio died in Porto Ercole in mysterious circumstances at the age of 39.

Below, you will find a list of Caravaggio’s works around Rome. If you prefer, you may also book a walking tour with a small group

Standing on the north side of Piazza del Popolo is Santa Maria del Popolo church containing two Caravaggio paintings in the Cerasi chapel. The Crucifixion of St. Peter (1600) shows the martyrdom of Peter who asked to be crucified upside down so as not to imitate Christ’s death. The look of surprise and sorrow on his face as he observes the nail pierced through his hand makes this scene moving and tragic. In Conversion on the way to Damascus (1601) Saint Paul is shown so stunned by the spirit of the lord that he has fallen from his horse in a profound moment of religious ecstasy. The painting perfectly captures his utter surrender to God.

Located in the quarter where Caravaggio spent much of his time working as well as carousing, The Contarelli Chapel inside the Church of St. Louis Of The French contains a sequence of the life of St. Matthew. The Calling of Saint Matthew (1600) depicts the moment when Christ inspires Matthew to follow him but the action is set in what looks like a 17th century pub where you, the viewer, might be looking on from another table. The Inspiration of St. Matthew (1602) shows an angel dictating his divine work to Matthew. The Martyrdom of St. Matthew (1600) captures the saint’s death at a moment of high drama, with the murderer about to stab the fallen Matthew amidst a sea of twisting bodies and agonized faces. Light illuminates the center while consuming darkness closes in from the periphery.

In the Madonna of Loreto or Pilgrim’s Madonna (1606) Caravaggio shocked church officials with his depiction of the Virgin Mary with the same bare feet as the two pilgrims who pray to her instead of as a vision of perfection and holy beauty. The halos on both her and the Christ child are scarcely visible and the model he used to paint the most holy woman in the Bible was a prostitute in real life. Caravaggio believed in depicting religious characters with naturalistic accuracy: a habit that won him fans on the street and enemies in the church.

John the Baptist, Youth with a ram (1602) fills the canvas completely, demanding the viewers attention. The surprisingly sexual overtones are fairly blatant: the main figure, naked and exposed, reclines on a bed of rumpled sheets, embracing a ram whose head is bent as if to kiss him. The youth turns to the viewer with a look perhaps of alarm at being “caught” but also with a playful and inviting smile.

Capturing the mid-scene, dramatic movement that was popular in Baroque art, The Entombment of Christ (1603) shows the moment when Christ’s followers carry his body from the cross to the grave. The figures are un-idealized and the scene rendered as realistically as possible, with Christ’s body heavy and awkward to carry; a finger of one of the disciples even slips into the wound in Christ’s side so as to provoke a gut reaction over a religious image already portrayed hundreds of times before.

With half a dozen paintings, the Borghese Gallery has the most exquisite Caravaggio’s per square meter in Rome. The Madonna of the Palafrenieri (1605) was so shocking that it was quickly removed from the church it was originally commissioned for and sold to Scipione Borghese. St. Ann, the virgin’s mother, is shown as an aged, time-worn old woman and the virgin herself (possibly the same model prostitute from the Pilgrim’s Madonna) as a messily attired, busty mum showing the Christ child how to fight a snake, the symbol of the devil.

Caravaggio sent David with the Head of Goliath (1610) to the Papal court as an plea for pardon after he was banished in Rome for murder.Some say the look of regret and resignation on David’s face is symbolic of the artist’s own remorse for what he had done while it is Goliath’s severed head, slack jawed and in misery that is his physical self portrait. Although he did receive a pardon, Caravaggio died before he could return to Rome.