Where to see Raphael’s work in Rome

Gracing Raphael’s grave is Cardinal Bembo’s Latin epitaph, later translated by Thomas Hardy: ‘Here’s one in whom Nature feared – faint at such vying – /Eclipse while he lived, and decease at his dying.’ Straining for superlatives Vasari says of  ‘the painter’s painter’:  He was ‘one of those who possessed such gifts, it is impossible to call them simply men, but rather mortal gods.’ Until the cleaning of the Sistine ceiling,  he was for centuries esteemed higher even than Michelangelo. With recent restoration of the Raphael rooms revealing techniques only Raphael was privy to, the question as to the greatest ever artist is again wide open. 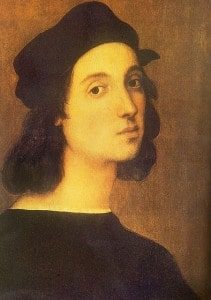 Happily defying genetics, Raphael – Raffaello Sanzio, ‘prince of painters’,  was son to one Giovanni di Sante of Urbino, ‘a painter of no great merit’, to cite Vasari. Fate would have it that Raphael’s birthplace was also that of Bramante, Pope Julius II’s architect and also Raphael’s distant relative. Julius had tired of occupying the rooms of his detested Borgia predecessor Alexander –  ‘that boor of cursed memory’, and so decided to have Bramante build a new apartment directly above.  When it came to decoration, Bramante knew exactly who to call on. Fresh from an apprenticeship in Perugia under Perugino, then a stay in Florence absorbing works by Massaccio and the latest Leonardos, Raphael was up to the task. ‘La Signoria’ room once finished, the Pope dismissed all his other painters and had Raphael fresco the remaining three rooms as well. After Julius’s death, the work continued, the iconography duly adjusted to celebrate, for new Pope Leo X,  divine interventions under other Pope Leos throughout history. More commissions came thick and fast from, for example, Papal banker Agostino Chigi and then Cardinal Giulio Medici. In the latter case for two years the expected painting – ‘The Transfiguration’ – was not forthcoming only to be found, so a story relates, at the foot of the artist’s deathbed. It was duly carried  aloft at the front of Raphael’s torch-lit cortege ‘of a 100 painters’ to his burial place in the Pantheon. 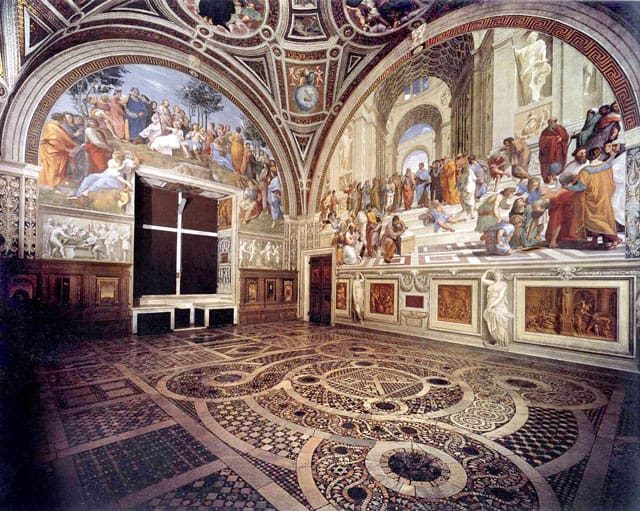 The first room decorated was  La Stanza della Segnatura, as it was subsequently called – a Tribunal. The iconography is better understood in light of the room’s original use as the Pope’s library – a pre-Dewey method of dividing knowledge being according to Theological Truth, Philosophical Truth, then the Good, and the Beautiful. So on the Vault  presides Theology pointing down at the Dispute of the Sacrament, while Philosophy connects with the School of Athens. In a masterpiece of double-take ancient philosophers bear faces of Raphael’s eminent contemporaries: In the centre are Plato/da Vinci and Aristotle/Sangallo, though the face of Diogenes sprawled indecorously aslant the steps, is, tactfully, the philosopher’s own. Front left broods Heraclitus/Michelangelo; front right Protogenes doubles as painter Sodoma, Zoroaster as Castiglione, while in elegant black cap Raphael cameos as himself.  Group pride of place goes to Euclid doubling as Bramante applying a set of compasses in just tribute to the mentor attributed with helping Raphael draw up the heavenly architecture stretching away behind. Other correspondences are there in Parnassus: Painted Apollo faces the Apollo statue in Julius’s Belvedere sculpture collection outside while Homer bears the look of the recently unearthed Laocaoon. 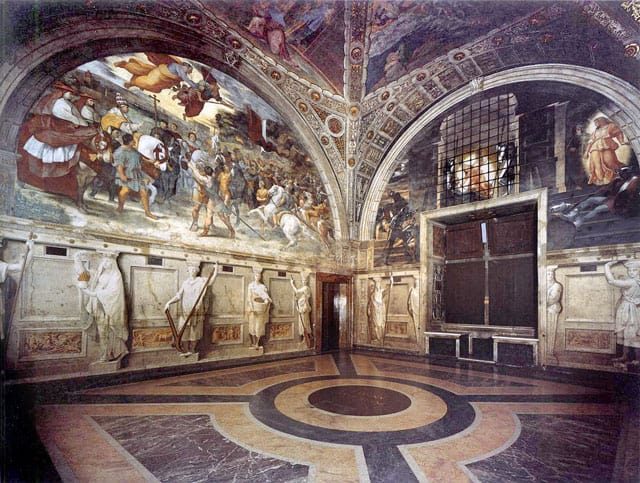 La Stanza di Eliodoro celebrates divine interventions to protect the Church from harm, topical enough given Pope Julius’ recent defeats in battle. In the title painting  Syrian usurper Heliodorus is stopped while sacking the temple as Pope Julius looks on approvingly from one side. Most startling of all is Peter’s release from prison. Painting’s first nocturne, the effects are enhanced by recent restoration: To paraphrase restorer Paolo Violini, ‘As I worked down, the rays split off in my fingers, then seemed to vanish completely. In a moment of terror I thought I was ruining a masterpiece. In the ‘50s the rays had been highlighted, blocking off the poorly-lit angel behind, so as to bring out the contrast. Now we discovered it is, instead, the angel that radiates light, is himself the light.’  Using meteorology to accentuate the struggle between good and evil, another mural has Pope Leo I riding out to confront Attila, new pope Leo X’s face replacing Julius’s only after the latter’s death. Nextdoor in ‘La Stanza dell’incendio’ (Room of the Fire in the Borgo) another Leo (IV) intervenes to save Rome from fire, though the other pictures here celebrating this and homonymous pontiff Leo III  are by Raphael’s assistants.

Finally in the room of Constantine, the largest and recently restored, the theme is the triumph of Christianity over Paganism. Thanks to the recent restorations, it was possible to confirm that here Raphael had painted two allegorical figures, Iustitia and Caritas, in his last days, with the oil technique and not with the usual fresco technique. 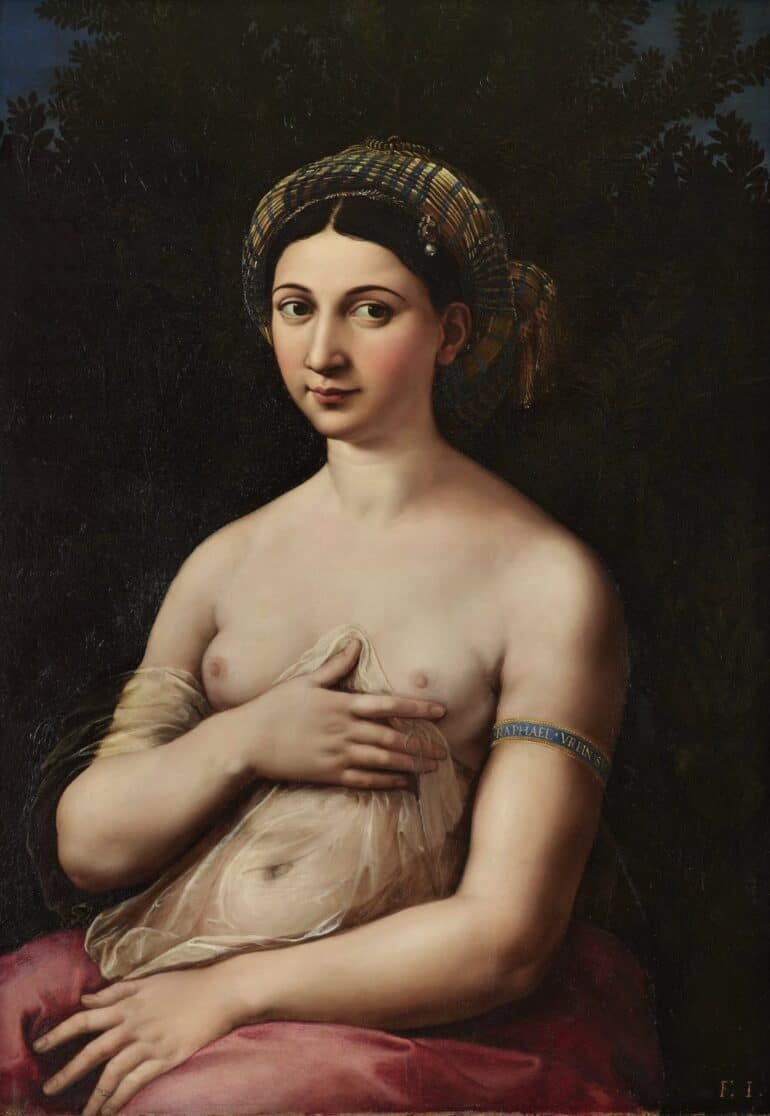 Portrait of woman as Venus or Fornarina is a beautiful, famous, and mysterious painting by Raphael. The subject of this portrait, according to tradition, was Raphael’s inspirational muse and mistress: Margherita Luti, the daughter of a baker in Trastevere, hence known as “Fornarina.” There is no record of any commission for the work, which supports the conjecture that Raphael painted it for himself in the last years of his life.

The Deposition of Christ 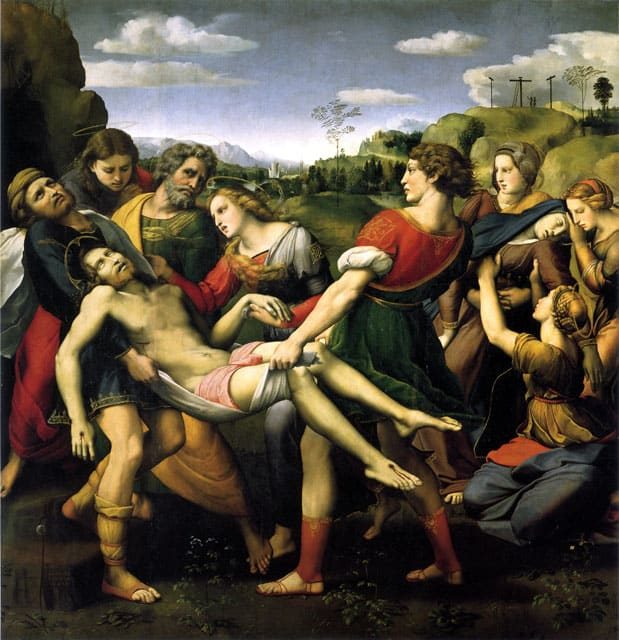 If there’s a ‘must-have’ painting, this is it. So much so that on orders of Borghese Pope Paolo V a band of men under cover of night slipped into Perugia’s  San Francesco church and stole the painting away, its ending up as a key work in his nephew’s Scipio Borghese collection. Who knows if those lips semi-open in wonderment in Bernini’s famous bust were not captured as the cardinal eyed this very work? Raphael meant the dead Christ figure and the two epic carriers as a tribute to Michelangelo; his arch rival considered them arrant plagiarism.  A story within a story: the carrier on the left resembles Grifonneto Baglioni, killed in a Perugian palace coup and in whose memory grieving mother, Atalanta, commissioned the painting in the first place. 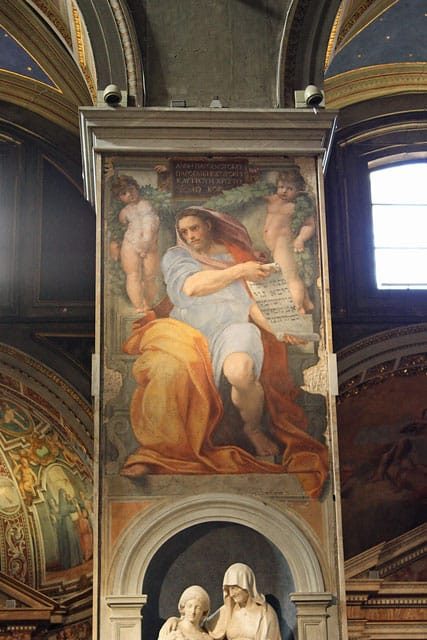 Vasari tells how, during one of Michelangelo’s absences, Bramante, strictly against Michelangelo’s orders, invited Raphael for a sneak peak at the unfinished Sistine ceiling. Certainly the prophet adorning the third pillar down Sant’Agostino’s nave has a ‘Michelangelesque’ grandeur . Similar borrowings are evident in S. Maria della Pace’s Sybils, one critic ranking them above Michelangelo’s originals, Raphael  bringing the Sistine ceiling’s ‘solitary and isolated figures’ together in ‘ a joyous chorus’.

The Loggia of Galatea 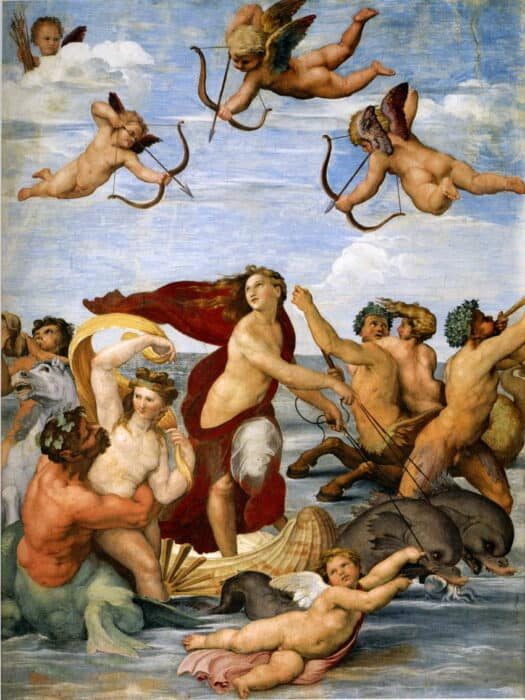 The Villa Farnesina‘s Loggia takes its name from the nymph Galatea frescoed by Raphael. Deep purple scales fall away like soft aquatic leaves from the flanks of the saffron coloured body of the bright handed triton, while his fiery face emerges from a mesh of algae; behind, the nymph’s back is nacreous and quivering. On the left the nude Nereid holds a burnished golden drape over her head in a classical gesture, which contrasts with the burnt tones of the hirsute triton. The Loggia of Galatea is frescoed by various artists, like Peruzzi and Sebastiano Del Piombo.

The Loggia of Cupid and Psyche

The Loggia of Cupid and Psyche takes its name from the decoration frescoed on the vault by Raphael and his workshop in 1518. The frescos represent episodes from the fable of Psyche, narrated in Apuleiu’s Golden Ass, which had already been used in the fifteenth century for nuptial imagery. 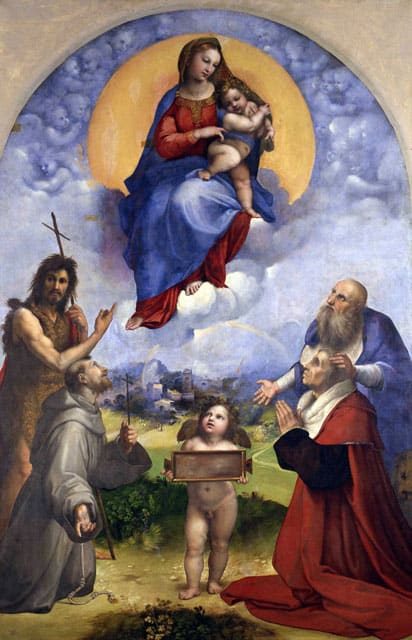 Julius’ private secretary Sigismondo, who ordered the painting, kneels accompanied by three saints while, thanks to the Virgin seated on a cloud above,  lightning leaves his house and family back in Foligno unharmed. 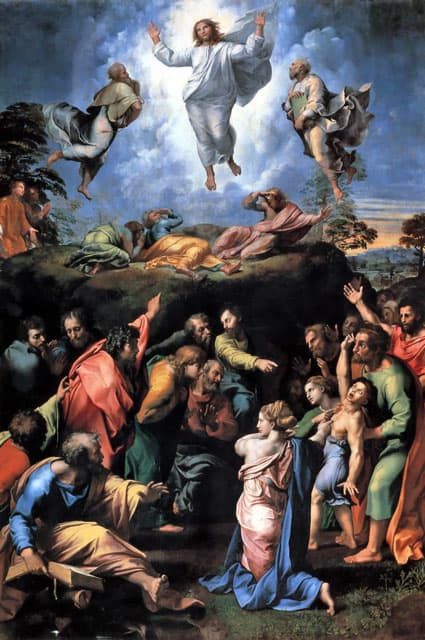 ‘And his face did shine like the sun, and his raiment was as white as light.’ Raphael also depicts Christ with arms raised, prefiguring the crucifixion. To his right is Moses, to his left, Elijah as below lie James, John and Peter, the only apostle with his eyes open, ‘a witness to majesty,’ to cite his Second Epistle. The picture’s darker lower half is, given Christ’s absence, a disquieting mixture of panic and helplessness now the other nine apostles try in vain to  heal the poor ‘demoniac’/ epileptic boy, his eyes rolling east and west.