Where to see Bernini’s Masterpieces in Rome

Follow the footsteps of Gianlorenzo Bernini who has shaped our very idea of Rome. The twisting Roman streets and piazzas are Bernini’s showroom, filled with his masterpieces of sculpture, paintings and architecture. No artist defined 17th-century Rome more than Bernini did, working under nine popes and leaving an indelible mark on the Eternal City.

In this guide we take a look at his dramatic and stormy genius and the city landmarks he created devoted to the imagination. 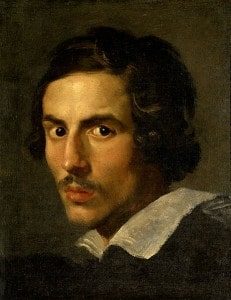 Born in Naples in 1598, Gian Lorenzo Bernini is considered by many as the greatest sculptor of the 17th Century Baroque era. Bernini’s father Pietro, also a sculptor guided the young Bernini’s talents. The family moved to Rome when Gian Lorenzo was about 8. It is said around this time Bernini carved his first sculpture. Ruled by the popes, who were constructing lavish churches and monuments, Rome was the place to be for a sculptor. Bernini, an eccentric Rome-ophile with genius vision, would enjoy 20 years of papal commissions. He would try to capture a fleeting moment just before or after speech and bring it to life. His hand was stilled due to paralysis shortly before his death at 81 in 1680, having created the most memorable monuments in Rome.

You are made for Rome,’ said Pope Urban VIII to him, ‘and Rome for you

Rome is known as an ‘open air museum’ largely due to Bernini’s fountains. The Fontana dei Quattro Fiumi, (1651) in Piazza Navona is a real showstopper and a favourite meeting spot. An Egyptian obelisk rises from rough travertine rock, surrounded by flowing water and muscular god-sentinels from the four main rivers of the continents then under papal sway. Pope Innocent X, favouring other artists, saw Bernini’s design and immediately changed his mind. Notice the river-god with a hood, signifying that the source of the River Nile was then masked in mystery. 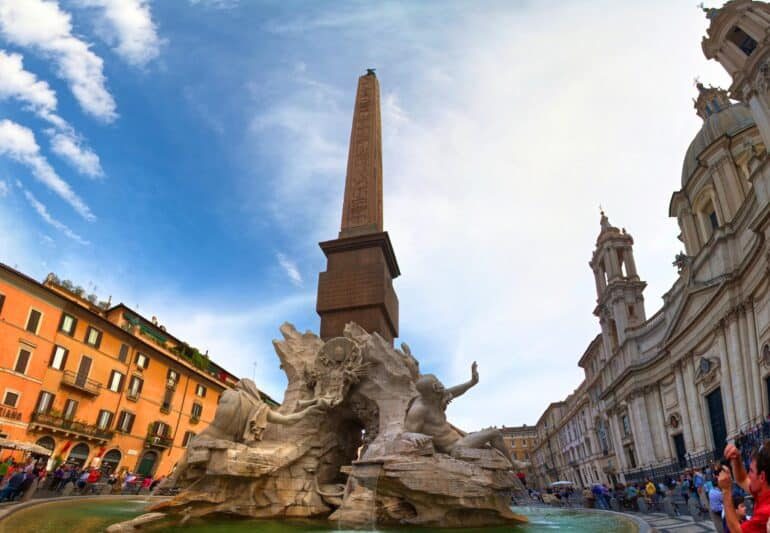 You can’t get much more dramatic than the Fontana del Tritone (1642) at Piazza Barberini. Bernini envisioned a striking mythical scene; strange dolphins support a huge scallop shell which acts as a stage for Triton, lord of the sea spurting water through a conch shell. A true testament to the artist’s fierce imagination. 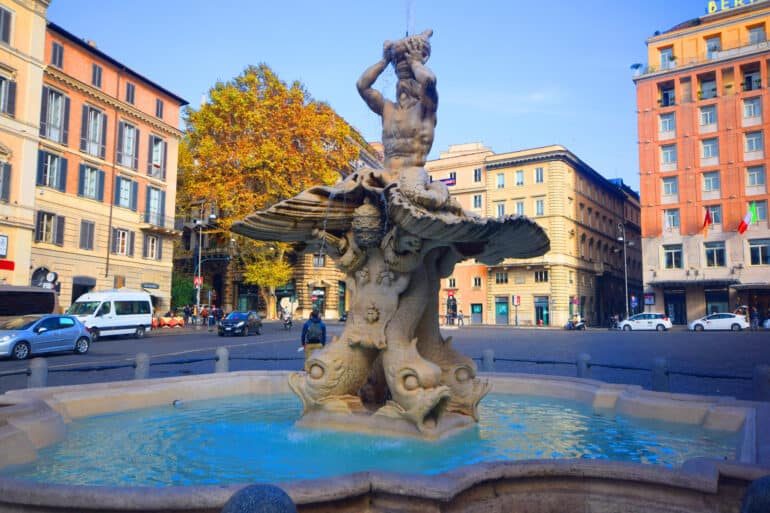 In Piazza Barberini, the beauty of the Fontana delle Api (1644) will inevitably catch your eye.  Its very point was to regulate the flow of the water of the Fontana del Tritone. The genius of Bernini lies in his ability to carve this necessary fountain, with the bees of the Barberini of Pope Urban VIII – the family who commissioned the work – while maintaining a harmonic and consistent layout of the square and the main fountain. 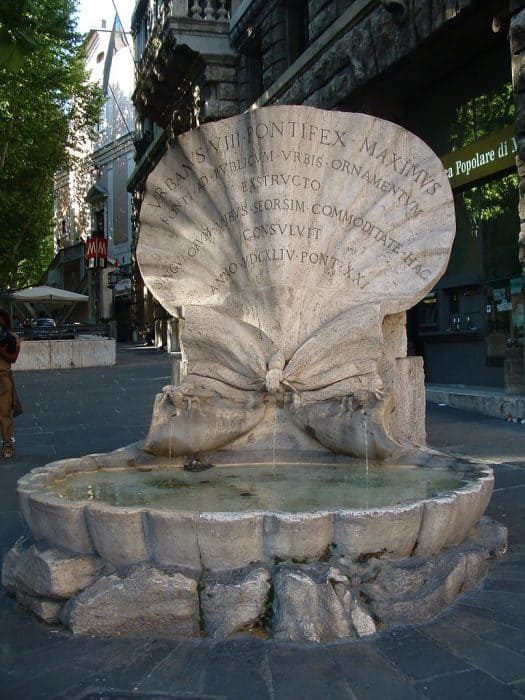 In front of the grandiose Spanish Steps lies Fontana della Barcaccia (loosely meaning the ugly boat). Built in 1627, it is rumoured that Bernini assisted his father Pietro in rendering the unusual half-sunken ship, making it one of his first fountains. Inspiration came after a great flood that submerged much of Rome 1598. Legend has it that once the water subsided, a damaged boat was left sitting ceremoniously on the piazza. Gentle fresh water flows from the fountain perched below street level making the most of the area’s low water pressure and supplying welcome refreshment to visitors on warm days. It was commissioned by Barberini Pope Urban VIII to commemorate the restoration of the ancient Aqua Vergine aqueduct, with his added family motifs of suns and bees.

The Borghese Gallery is probably the best place to appreciate Bernini’s talent and genius and is admirably known to have the greatest collection of the artist.

In Apollo and Daphne (1622-25), inspired by a story from the tale of Ovid’s Metamorphosis,marble leaves are rendered with painstaking care, spreading from Daphne’s fingers who is captured transforming into a laurel tree to dissuade the advances of Apollo.

Bernini was only 23 years when he completed the Rape of Proserpina (1621-25) that portrays the abduction of Proserpina by Pluto, the god of the underworld.

In his David (1623-24), Bernini represents the moment when the biblical hero, armed only with a slingshot, faces the giant Goliath.

Ponte Sant’Angelo was completed in 134 AD by Roman Emperor Hadrian. In 1669 Bernini added ten enigmatic angels lining the bridge commissioned by Pope Clement IX. It is one of my favourite works in Rome. Bernini sculpted two angels, which were taken for the Pope’s own collection, soon replaced by copies by his own hand, while the others were made by pupils based on his designs. 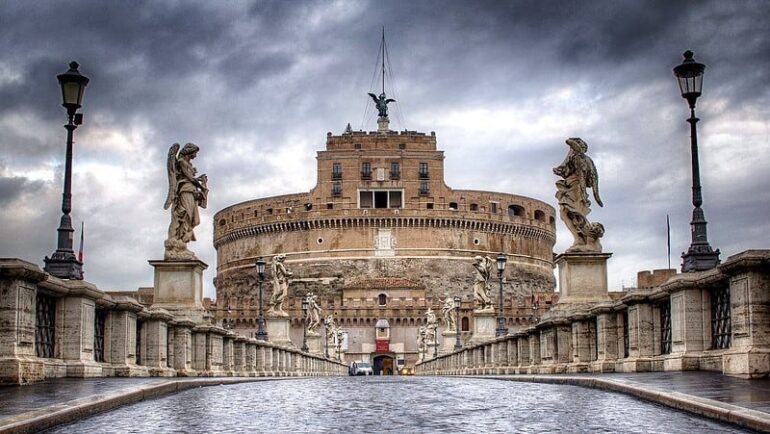 Elephant and Obelisk, in front of Santa Maria sopra Minerva Church is a great example of Bernini’s powers of whimsical beauty. The obelisk sitting atop an elephant is Egyptian, 6th century BC and was once part of the Temple of Isis. The piece was designed by Bernini and carried out by one of his students in 1667.

In a chapel of Santa Maria della Vittoria, St. Theresa in Ecstasy (1652) is pierced with divine love, facing the heavens with lips parted in a moving, if somewhat suggestive pose. The true achievement for me is the material of her habit; seeming as if soft cloth undulating around her. Bernini himself considered this his most beautiful piece.

Bernini must have identified with the intense emotion of ecstasy, as he created another, I think even more beautiful; Blessed Ludovica Albertoni (1674) in the church of San Francesco a Ripa, a small simple church in the backstreets of Trastevere. The emotion stretched on her face is raw and palpable. (The creepy cherub heads intently watching over her are an added bonus.)

St. Peter’s Square and Basilica are home to a massive collection of Bernini’s commissions, most notably the sweeping colonnades of St Peter’s Square (284 Doric columns four rows deep) meant to symbolise welcoming arms. Bernini’s first architectural project here was the magnificent bronze baldachin canopy (1623 – 1634), over the high altar in St. Peter’s Basilica. The baldachin marks the tomb of St. Peter, situated inside the baslica. It reminds me of a Jewish wedding altar or a grand four poster bed, with twirling decorative posts rising upwards. 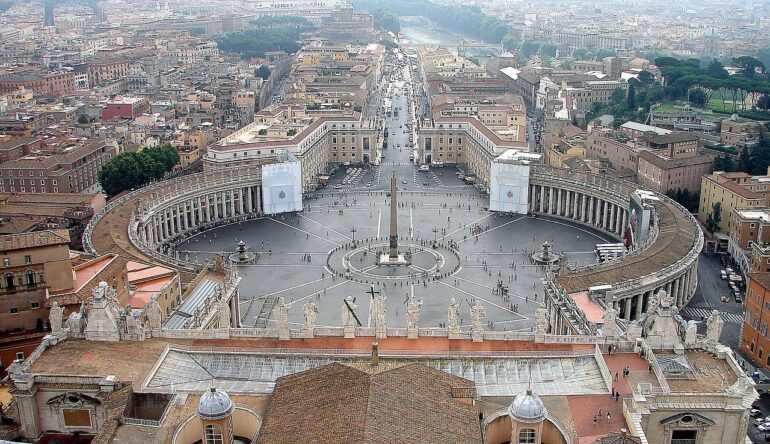 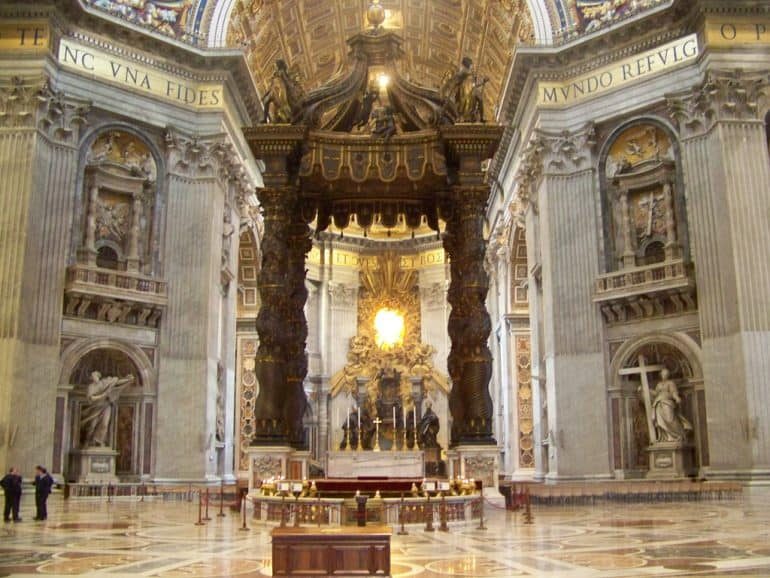 The Church of S. Andrea al Quirinale is a jewel of the Baroque, built between 1658 and 1670. It was designed by Gian Lorenzo Bernini with Giovanni de’Rossi on commission from Pope Alexander VII and Cardinal Camillo Pamphilj. Sant’Andrea was the third Jesuit church constructed in Rome, after the Church of the Gesù and Sant’Ignazio.

The Baroque palace of Palazzo Barberini was designed by three of the most important architects of the 1600s: Carlo Maderno, Gian Lorenzo Bernini and Francesco Borromini. The oval room and the large hall frescoed by Pietro da Cortona were designed by Bernini as well as the majestic square-shafted staircase.

Bernini produced the self-portrait as a young man around the age of 25.  The painting, together with two other works in the Galleria Borghese, the Self-portrait at a Mature Age and the Portrait of a Boy, offer significant testimony to the artist’s work as a painter.

Other Bernini’s works in Rome:

Other Bernini’s works at Borghese Gallery: