The Great Wave, Katsushika Hokusai’s iconic painting, invokes the terror of the 15-meter tsunami that took down Fukushima in 2011, the pummelling hurricanes of the past month. In the wood-block print, the wave towers over a distant Mt. Fuji, its finger-like foam edges menacing sailors who dangle from flimsy boats. Almost two hundred years after his death, Hokusai’s prints, painted scrolls, and ‘manga’ sketchbooks still illicit this kind of immediate, visceral reaction.

A favorite part of the exhibition was Hokusai’s leather-bound sketchbooks, displayed under glass, inviting viewers up close to see his playful experimentation with line and gesture. In one, an old man leaps about in a short kimono, sometimes mooning the viewer. Another shows the cartoonish portraits of grandfathers, with all varieties of wrinkles, eyebrows gone awry, and rounded jowels. These notebooks were used as teaching tools in Japan, and as far away as Europe, where French Impressionists such as Manet, Monet, Toulouse Lautrec, and Van Gogh looked to Hokusai for his compositions, perspective, and pattern play.

The cultural contrast between the European and Japanese contemporaries, however, is striking. While the subjects of iconic Impressionist paintings lounge in repose, drink wine by a lake, or reflect in a parlor, Hokusai’s subjects are in continuous, laborious motion. They are hunched over, with heavy sacks on their backs, or poles across their shoulders. They fish and harvest rice, a collective. 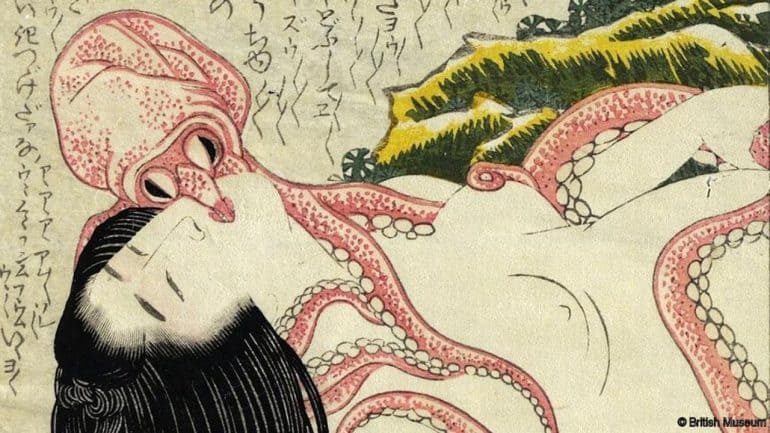 Throughout the show, Hokusai’s humility, a sense that he is constantly in pursuit of something larger than himself, seeps through. Near the exit, an excerpt from Hokusai’s journal is transcribed in white letters on a red wall: “I have been in love with painting ever since the age of six…until the age of 70, nothing I drew was worthy of notice…at 110, every dot and every stroke will be as though alive.”