So the editor of Italian Men’s Vogue got in touch with me this month to ask if I could write a piece for his next issue. I have a weakness for men’s publications, and L’Uomo, with its leaning towards the arts, business and culture, is a particular favourite. So of course I’m excited. Of course I’m flattered that he considers my Italian of a level he could publish. He wants interviews with a portfolio of “cool young Australian males living in Italy”… we’ll do a full photo shoot with the interviewees… it will be similar to features they’ve done in the past with astounding emerging talent in China, Africa and New York. There’s just one problem: the total dearth of foreign males in Italy, let alone ones with talent. I contacted universities and acclaimed schools in the area of design, fashion, gastronomy, architecture, literature; I spoke with the Australian embassy, friends, ex-colleagues… the response was always the same, “Ah, but if you were looking for a talented female expat, it would be so much easier!” Google turned up artists who were on the pension, middle-aged men with kids and wife renovating a farmhouse and some vaguely talented media types who had done a ‘stint’ in Italy but were now cozily ensconced in Sydney suburbia.

Are we so starved of this type of attention in Anglo-saxon countries?

So why is this? It’s by no means limited to Australians. Every week it seems a new dreamy but driven female steps off the plane at Fiumicino, whether in her late teens or middle aged, whether American, British, German or Swedish, but I can count on one hand the number of foreign males embarking on the same adventure – and almost all of these have simply ended up here after being transferred by a multinational. I suppose the most obvious attractions of this vita italiana include food, history, art and a slower pace of life – all of which I wouldn’t class as being gender-specific pleasures. Allora? I must admit that whenever someone asks why I decided to move to Italy they all knowingly grin and pre-empt my response with “it was an Italian boy you fell for, no?” Okay, there are indeed many cases of the girl-holidays-in-Italy followed by girl-meets-Italian-boy followed (sometimes even decades later) by girl-is-convinced-she-can-learn-Italian-and-move-to-Italy-to-live-happily-ever-after-with-holiday-crush. Just this month in British Harper’s Bazaar was yet another article of a woman now married with kids who felt compelled to return to Florence after being haunted by a brief but life-changing time spent in Italy in her youth. Certainly, this country does affirm one’s femininity in ways that are thrilling and abstract. Are we so starved of this type of attention in Anglo-saxon countries that when on a two-week language course, a brush with the intoxicating (yet to locals almost banal) call of ‘Ciao bella’ from a stranger in a street can inspire women to leave partners, march into offices to hand in resignations and haul suitcases into a foreign-speaking country where the chances of even a menial job are quasi impossibile. We’re not talking about aimless unaccomplished wallflower women who don’t know what to do with their lives. Almost every female I’ve met who’s moved here has a Masters degree, was earning unprecedented money for her age in her respective industry, and physically, isn’t the type who needs to play the ‘exotic’ straniera in order to be admired. And if it is the Italian boys who are unwittingly perpetuating the ‘Italian Dream’, doesn’t it make you wonder – while Andrea and Lorenzo are kissing Kate and Helga – what the devil have the Italian girls been doing? I know readers get upset at generalisations but Italian women are arguably the most seductive in the world. Why hasn’t there been an equivalent mass exodus as starry-eyed male graduates and soul-searching old codgers depart for Italia with hopes of meeting their Sofia Loren or Monica Vitti?

Whenever someone asks why I decided to move to Italy they all knowingly grin and pre-empt my response with “it was an Italian boy you fell for, no?”

So much of the allure of Italy for me is about living in this melodious and ancient language. Whether you love Italian for its lyricism or your linguistic pursuits are from a desire to deepen your relationship with an Italian, why is it that females seem more inclined to work at becoming fluent? Are many men just lazy and would prefer to move to an English-speaking country? I remember when I lived in Japan I was constantly surprised by the number of Anglo-saxon males in relationships with Japanese women who didn’t even attempt to learn the language while their girlfriends would suddenly become fluent overnight to maintain the relationship. I know, I know… there are always exceptions. However, researching this topic, I found articles such as one by Anne Merritt for The Telegraph that substantiated this seemingly indiscriminate claim that women are better at languages than men. According to linguistic studies “girls’ brains show greater activity in the areas used for language encoding” and across Europe, East Asia, and Latin America “all studies have concluded that female foreign language learners tend to use more varied study methods than their male peers.” Meanwhile a language learning site found that “female users are four times more likely to chat with native speakers of their target language.” 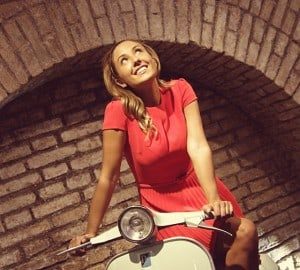 I have so many male friends and ex-boyfriends who are magnificently romantic. They’re the types who book international flights the night before to show up on her door and profess their love (sometimes in song). They’re the types who are right there beside me grinning and hoping and dreaming after watching some romantic film narrative where the guy gets the girl with that final hyper-eloquent one-liner in the rain. They want to risk everything and be foolish and scared and bankrupt all to find the girl they were meant to kiss. So why aren’t there more of them trying to do all of that in Italy, the ULTIMATE land of reckless romantics? Chissa’.