Anita Ekberg and that scene in ‘La Dolce Vita‘ is an exception. Except, perhaps, if you’re a film-star, the Trevi fountain is strictly out of bounds to bathers. Bernini’s many-statued wonders in Piazza Navona are also for the eyes only. When it comes to fountains for the everyman, a true democracy of water, there is, instead, ‘il nasone.‘ Or ‘er nasone’ in more local Romanesco.

Ancient Roman times had wandering water-sellers, the ‘aquarii’. More recent times had ‘acquacetosari’ – ‘a small association of hawkers, mixing their call with two or three hundred other cries which for centuries turned the silent Roman streets into a noisy hive of worker bees.’ In the ‘er nasone’ the same ancient-or-not-so-ancient water-seller re-emerges as a short cast-iron pillar-shaped robot, complete with cap, SPQR insignia and, yes, a protuberant nose. Mass-produced from the 1920s onwards, this does not mean that Rome’s 2500 nasoni cannot assume personal identities of their own. One nasone in Pigneto is coated with the orange and yellow colours of AC Roma; further on, another has turned green. Others come with a large saucer below so that dogs can enjoy the fountain too.

Piazza della Rotonda has a nasone whose noses are two. Off Via Nazionale, in Via delle Tre Cannelle, the nasone, following the original 1874 design, has not one, not two noses, three. Making it ‘nasoni’ in the plural case. Although here the noses are also heads of dragons turned rusty green with time. Through a hole in the top you can, by blocking the down-turned nose/mouth, spurt water upwards without having to bend down.

If at 110 cm tall the nasoni are smaller than the human water-sellers they put out of business, they more than compensate for it in weight, being 110 kilos each. They are also mercifully quiet. Nor do they charge fees. And this is for a service carried on season in, season out, 24 hours/7days a week. As the ACEA website (where you can see the map of public water fountains in Rome) points out, this continuity is ‘an indisputable plus for health and hygiene. A permanent flow remains in the system for less time and so maintains a constantly cool temperature’. ‘Good like water’, to repeat a Corriere della Sera headline praising an ACEA report confirming that ‘Rome’s water is safe and among Italy’s best.’ With its laboratories carrying out 250,000 samplings a year, how could it be otherwise? 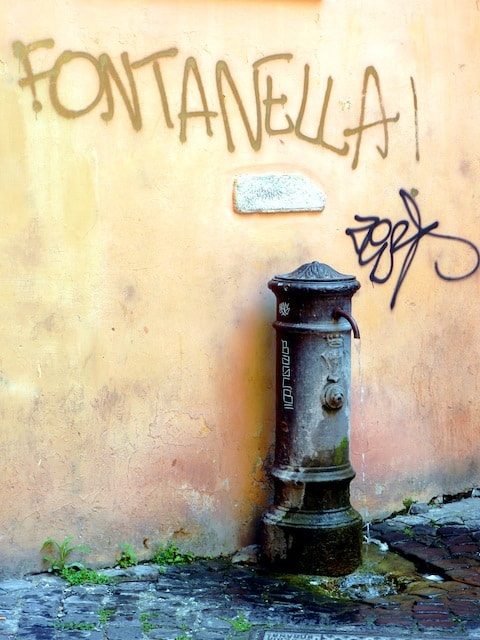 When in 2005 the nasoni were threatened with extinction, there was an outcry. Then after an attempt by workmen to shift by a mere few metres the nasone in Via Fienili – famous for its appearance in the Gassman/Manfredi film ‘C’eravano tanto amati’ – the locals banded together. Their protest prompted the headline – ‘Nasone della Discordia’. In another incident in July the nasone in Campo dei Fiori was knocked over by a four-wheeled vehicle. ‘Poor nasone!’ lamented the journalist, as if the fountain were a pedestrian someone had run over. Between the lines, here’s a service which is efficient and freely available to all. ‘When the wells run dry, you know the value of water’, wrote Benjamin Franklin. Long may it keep on flowing, and the nasoni, public servants par excellence, remain untouched. It’s the least which they deserve, continuing as they do, a tradition of public water supply for which the Ancient Romans were millennia ahead of their time.

CLICK HERE TO DISCOVER THE MOST BEAUTIFUL FOUNTAINS IN ROME