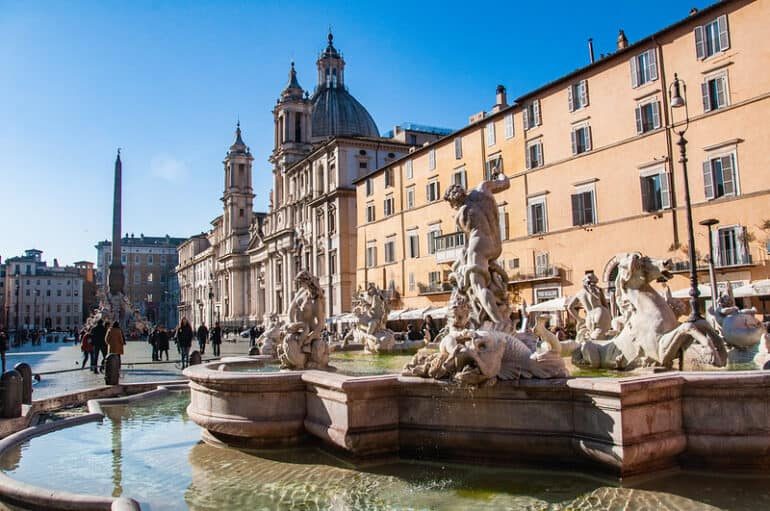 The Most Beautiful and Famous Rome Fountains

It is impossible to imagine Rome without its wonderful fountains. Since the ancient Roman times when water flowed freely from its aqueducts, the fountains of Rome are an invaluable artistic and cultural heritage. Immortalized in great movie masterpieces (who doesn’t remember Federico Fellini‘s La Dolce Vita Scene with Marcello Mastroianni and Anita Ekberg inside Fontana di Trevi), but also as set of many events that have made the history of the Italian capital.

Rome has over 2000 fountains in all, more than any other city in the world: 50 monumental fountains, hundreds of smaller fountains and thousands of  nasoni (big noses), supplying citizens and tourists with free drinking water. Here are our favorite ones.

When one thinks of Rome, especially romantic Rome, the Fontana di Trevi (Trevi Fountain) always comes to mind. And who could blame them? Picture cascades of an aquatic dream that flow heavenly into a basin tucked into a nook that adjoins three streets. Bernini and Pietro da Cortona were first comissioned to do the job, which was later made over by Niccolo Salvi, the mastermind behind those divine mermaids! The fountain went onto become a famous backdrop for the glorious Italian film La Dolce Vita and American blockbuster Three Coins in a Fountain.

INSPIRATION
10 Things You Didn’t Know About The Trevi Fountain

At the centro of probably the most talked about piazza and just beneath the Spanish Steps lies a fountain designed out of a half-sunken boat that’s molto curioso. Contrary to the dramatic design of other fountains around Rome, water gently flows into the basin. Barberini Pope Urban VIII commissioned the father and son team Pietro and Gian Lorenzo Bernini as the creators during the 17th century. Legend has it that the fountain’s design was meant to resemble what this area often looked like when flooded by the Tiber River.

Whether you’re into naughty or nice, it’s hard not to marvel at the characters frolicking in this resplendent fountain. The Fountain of Water Nymphs was the talk of the town when it was first unveiled by architect Mario Rutelli in 1901. Apparently, many people had a problem with the fact that there were four nude naiads (water nymps) at the heart of this fountain, surrounding Glaucus, the once mortal fisherman wrestling a fish. For its time, it was considered way too provocative.

This fountain is a bit off the beaten path and unless you knew about it, you probably wouldn’t just stumble upon it. But it’s definitely worth checking out. The Fountain of Turtles was designed during the 16th century by Giacomo della Porta, also the mastermind of the two outer fountains in Piazza Navona. It’s located in the heart of the Jewish Ghetto in Piazza Mattei, named after the Mattei family, one of the most powerful families during the Renaissance period.

Right smack dab in the congested Piazza Barberini, stands the almighty Fontana del Tritone (Fountain of Triton). This fountain along with many others around Rome, was ordered by Pope Urban VIII Barberini to be sculpted in 1642 by none other than the man himself. Yes, you guessed it: Bernini! The fountain features the triumphant sea-god Triton bursting out of a seashell.

Not making a stop by this fountain would just be downright sinful. Especially if Pope Innocent X had anything to say about it. The fountain at the cuore of Piazza Navona was designed by the acclaimed Gian Lorenzo Bernini in 1651. The fountain’s foundation was made to support the four river gods sculpted just above the rocks. Together, the four gods represent four major rivers from continents in which, legend has it, the papal authority was most influentual: the Nile (Africa), the Danube (Europe), the Ganges (Asia) and the Plate (Americas).

The Fontana del Moro by Gianlorenzo Bernini is one of the three fountains that adorn  Piazza Navona in Rome. This too was done under Innocent X as the Fountain of the Four Rivers. The Moro group was sculpted in 1654 by Giovanni Antonio Mari, based on Bernini’s sketch.

Crossing over Rome’s River Tiber, you can find the monumental Fontana dell’Acqua Paola. Sometimes known as Il Fontanone (the big fountain) it is not only an impressive sight in itself but being located on the Gianicolo hill, it offers one of the best views of the entirety of Rome. With the design work of Domenico Fontana’s brother, Giovanni and the white marble taken from the ruins of the Roman Temple of Minerva, it’s a fountain of great proportion to match the vast panorama it overlooks.

Here’s a teeny tiny little fountain that’s oh-so-delightful yet often goes unnoticed and left in the shadow of the almighty Fontana del Tritone just across the way. It’s decorated with bees, the official coat of arms for the great Barberini family. It was sculpted by Gian Lorenzo Bernini and completed in 1644. The fountain also features a carved shell with an inscription dedicated to Pope Urban VIII.

They say good things come in pairs. Well in this case, it’s a case of fours. At the intersection of Via delle Quattro Fontane and Via del Quirinale lies a group of four late Renaissance fountains ordered by Pope Sixtus V between 1588 and 1593. The figures of the fab four, represent the Tiber River (a Roman symbol); the Arno River (the symbol of Florence); the Goddess Juno (the symbol of strength) and the Goddess Diana (the symbol of chastity). Also located near the fountains is the Baroquesque church San Carlo delle Quattro Fontane designed by Francesco Borromini.

The fountain of the Rane (Frogs) was designed in 1924 by the architect Gino Coppedè. It is placed at the centre of the quarter designed by him and named after him. The work was intended to be a tribute to Bernini’s fountains and actually the low level of the pond and the well-structured lively composition are features that remind us of those works.

This fountain is set against the wall that separates Via Giulia from the Lungotevere, not far from Palazzo Farnese. It was built – presumably in the second quarter of the seventeenth century – at the expense of the Farnese family  by Girolamo Rainaldi (1570-1655), the same architect who in those years built the twin fountains on Piazza Farnese.