If you’re looking for an exciting new nocturnal experience in Rome, with live music of every genre, and musicians from every corner of the world, then you must go to Open Mic Rome. Any music lover will immediately fall head over heels with one of Rome’s best local secrets.

Pull up a seat at the bar, order a drink of choice, and sit down to listen. Salvatore, Open Mic’s host, gets onstage, starts playing something by Johnny Cash on the acoustic—usually “Ring of Fire” or “Folsom Prison Blues.” But two or three songs in, and it’s your turn, if you want it. All kinds of entertainment are accepted. Usually, it’s someone singing with a guitar, but some venues have a piano available, and there’s always room for some slam poetry, or stand-up comedy, or street circus acts. You can bring your own instrument, too, anything from an electric guitar to a trumpet to an accordion. And singing a cappella is one of the most popular choices, since many people don’t think they’re going to get onstage until they’ve had a beer or two or three. 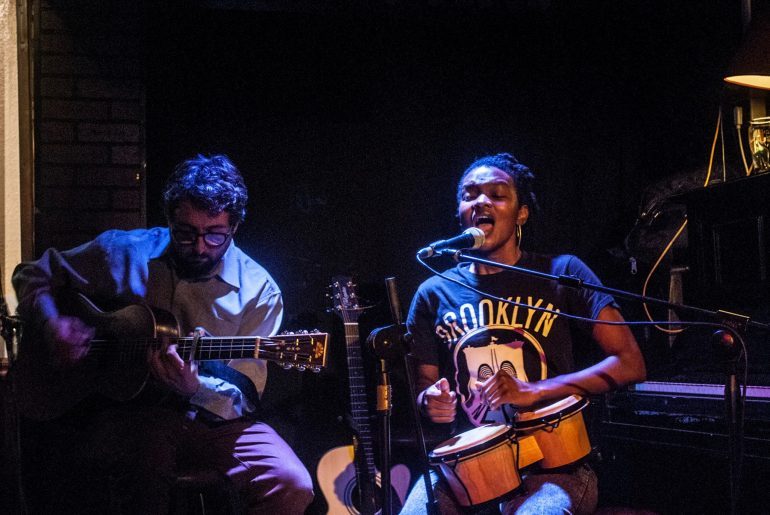 Sunday nights, Open Mic is at San Belushi (Via dei Luceri, 13) a speakeasy-style bar hidden on a little street in San Lorenzo. If you arrive by 9, there’s a fresh, delicious, buffet-style aperitivo available with any drink. Pass from the bar to the performance area, and you can find yourself a table while you sit back and enjoy the music.
Added plus: a drum-set.

Monday nights, it’s Bar Fondi (Via Magenta, 61) right by Termini Station, a lively bar where you always end up dancing at the front, or doing rounds and rounds of shots at the bar. Because of its proximity to the station, there are always travelers and performers from around the world: Israel, Dubai, and the UK have all recently been represented at Bar Fondi. It’s buzzing with energy all night.
Added plus: the bar’s signature cocktail, the Coffee Pot.

Tuesdays, Open Mic is at Il Cantine (Via della Batteria Nomentana, 66) a music club and bar that can accommodate all kinds of music and performances. There’s always music playing here, even when it isn’t a Tuesday, and it’s also popular among locals, which means that if you want to hear what the Italians are up to musically these days, check it out!
Added plus: a piano, and friendly host Francesco.

Wednesdays, it’s The Public House (Via delle Tre Cannelle, 8) an expat haven that offers a variety of beers and dishes for dinner, along with a bar staff that wants to get you drunk. The stage is up against the window, in front of tables you can sit at all night, so there’s something about the space that makes you feel as if you’re in your living room, intimately enjoying the music.
Added plus: the bartender, Bianca.

The last night of Open Mic Rome is hosted Thursdays at The Fiddler’s Elbow (Via dell’Olmata, 43), the original place for open mic, where the event has been running for a decade. This is where the regulars go, the musicians who’ve been doing this a long time, but because the location is so central, there are lots of travelers here, too. So it’s a mix of the new and the old.
Added plus:a piano. Oh, and Guinness, too.