The best things to do in the Villa Doria Pamphilj park

If you enjoy being outdoors in nature, learning about history and spending your day at one of Rome’s most beautiful and essential parks, Villa Doria Pamphilj is your ideal choice. Villa Pamphilj is a hidden gem just outside the city center. It’s the biggest park in Rome and one of the most famous parks in Rome, not only for its massive surface of 184 hectares (94 hectares available to the public) but also because of its marvellous 17th architecture, palaces, and fountains. Thousands of tourists and locals visit Villa Pamphilj yearly, but your experience will always be authentic thanks to its huge surface–you will truly feel like an aristocrat wandering around the Villa’s gardens.

Where is Villa Doria Pamphili?

It’s located in the Gianicolo hill in the Monteverde neighbourhood. Villa Doria Pamphilj can be accessed from four main locations: Via Aurelia Antica, Via Leone XIII, Via Largo Casale Vigna Vecchia and Via San Pancrazio.

What to do in Villa Doria Pamphilj? 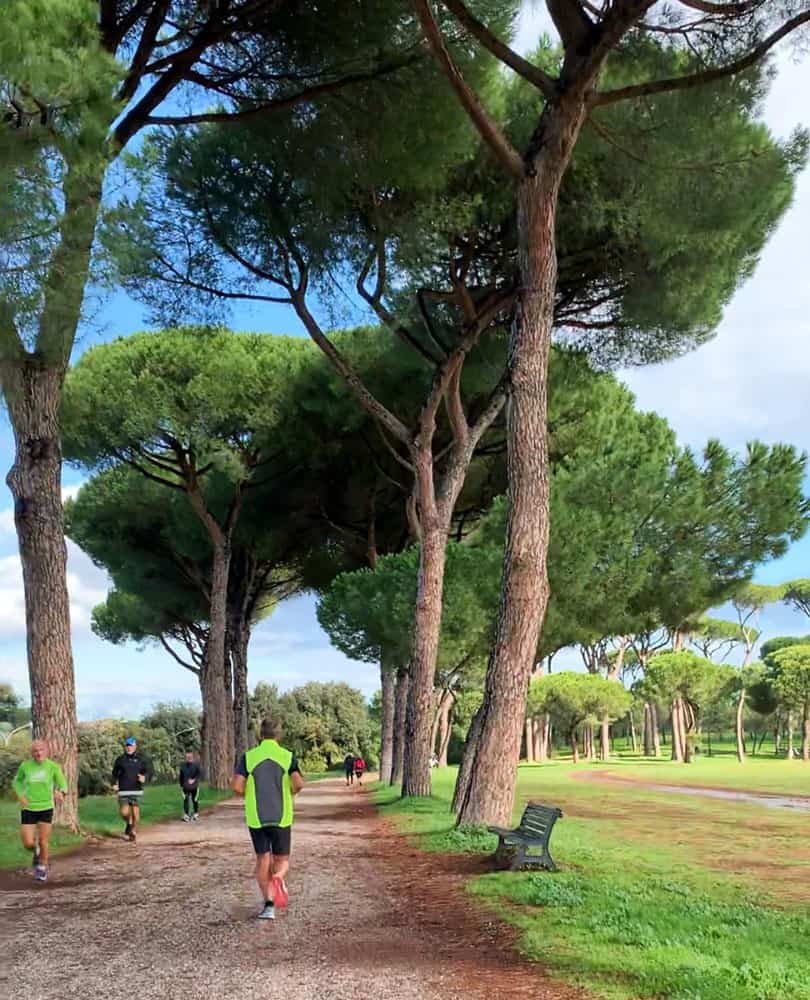 Sometimes Rome can get overwhelming, and a day spent in nature can be the perfect getaway. It’s the ideal place for anyone’s needs: whether you’re looking for a place to exercise, relax, meditate, or a place to get some inspiration from. There’s also a playground in the western part of the park. If you’re a picnic lover, grab some food and a blanket and have a picnic spread on the grass. The park is also filled with benches and tables! Pets are also welcome, of course.

A bit of history about Villa Doria Pamphilj

Villa Doria Pamphilj, named after the noble Pamphilj family, was built in the 16th and 17th centuries. Designed by Alessandro Algardi and Giovanni Francesco Grimaldi, the villa and park was meant to express the wealth and power of this aristocratic family.

The Villa was the country residence of the Pamphilj family. In 1856 Prince Andrea V Doria Pamphilj acquired the Villa Corsini in Porta San Pancrazio, which represented the last major expansion of the Villa. From 1965 to 1971 the Italian State acquired the Villa, opening it to the public.

What to see at Villa Doria Pamphilj?

Apart from being one of the government’s representative offices, Casino del Bel Respiro is located on the eastern side of the park and it’s one of the most beautiful parts of the Villa. The secret garden surrounding the Villa will make you travel back in time–you won’t feel like you’re in Rome. An interesting fact of the Casino del Bel Respiro is its one-and-a-half kilometer tunnel that connects the Casino to the Vatican. It was built in 1644 by Cardinal Giambattista Pamhpiilj, who became Pope Innocenzo X, and later on used as an escape route for the Popes.

As all parks, Villa Doria Pamphilj is the idea location to exercise. Your morning workout, picnic, or photoshoots will be even more exciting near the beautiful lake of Belvedere. This stunning area of the park offers a fantastic view, while the natural lake is surrounded by trees of various kinds, wonderful paths and three lookout points. There’s been a recent redevelopment of the lake, so it’s more beautiful than ever.

Villa Corsini encapsulates a unique mix of styles due to the restorations and modifications made after the Gianicolo battle in 1849. This part of the park was acquired only in 1856 and contributed to the further expansion of the Villa’s grounds.

Another beautiful part of the Villa is the Doria Pamphilj Chapel, built in honor of Alfonso Doria Pamphilj’s father and brother. Later on, it became the family’s official chapel for funerals. Built by the architect Odoardo Collamarini from 1896 to 1902, the chapel is constructed in a neo-Gothic style, characterized by pointed arches.

A must-visit is the Garden of the Theatre, one of the most beautiful parts of the Pamphilj park, built between 1664 and 1652, taking inspiration from the English-style gardens. This particular area was used for open-air shows and theater plays.

The Garden of Greenhouses was planted with various kinds of trees and flowers, but mainly citrus trees, which enhanced the garden’s exotic look.

The Venus Fountain is one of the many other fountains located throughout the park. Fontana di Venere has a particular style of different mythological creatures engraved along it. The Fontana del Giglio, built by Algardi in the 17th century, whose name comes from the “giglio” (fleur-de-lis), reminding of the coat of arms of the Pamphili family. The Fountain of Cupid was created in 1855 based on a design by Italian architect Andrea Busiri Vici. Unfortunately, the statue of Cupid, which gave the fountain its name, is no longer present.

While the alley of the Deers used to be a private part of the park dedicated to the Pamphilj family’s hunting activities. The name originated after the Pamphilj dynasty dried out–the landscape was abandoned and deers started inhabiting the vast surface of 60,000 square meters.

Arco dei Quattro Venti (Arch of four winds) is one of the four main entrances (Via San Pancrazio) of the park. It is one of the most beautiful ones because it gives you a feel of what your experience at Villa Doria Pamphilj will be like–nature intertwined with noble architecture.

Where to eat at Villa Doria Pamphilj? 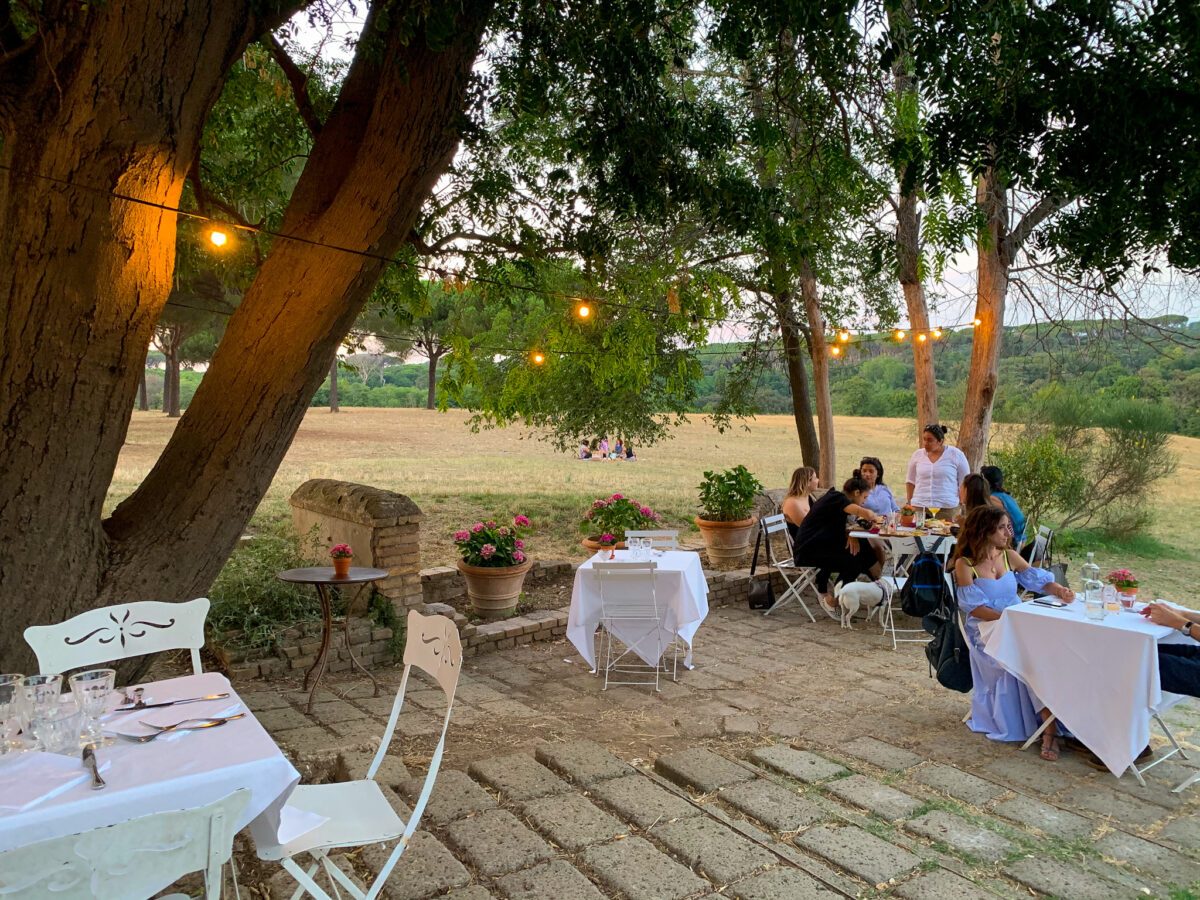 Since you’re in Villa Doria Pamphilj already, why not continue swapping the bustling city for a serene park for lunch, brunch, dinner or a snack? Nestled amongst sloping hills and lush trees, Vivi Bistrot is the only cafe inside the park offering healthy options like hummus, guacamole, whole grains salads, healthy bowls and more. They also offer a terrific American-style brunch (think pancakes and scrambled eggs), perfect for those of us who like to sleep late on Sunday. And if that wren’t enough, the bistrot also prepares a picnic for two in an old-fashioned wicker basket, letting you decide where exactly on the park’s grounds you’d like to lunch.

From October to February: 7am – 6pm

From March to September: 7am – 8pm